Zvi is a veteran of numerous GP Top 8's, appearing at New Orleans with Turboland, which he won, and in Pittsburgh with his teammates Justin Gary and Alex Shvartsman. Oh yeah, he won that one as well.

The goblins hit the table fast and furious. Sledder from Zvi, Prospector from Keith. Sparksmith from Zvi. Keith killed the Sparksmith with a Volcanic Hammer and the action continued at a furious pace. 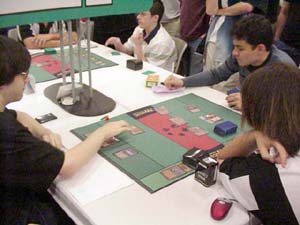 The players were down to fourteen life each when Keith dropped a land and used it to cast Blistering Firecat, sending the Firecat into the Red Zone and cutting Zvi's life total in half.

A twitter from Zvi as he played Siege-Gang commander and sent it into the Red Zone. He held back one of the Goblin Tokens in case Keith had another Firecat.

Keith didn't, and the lightning quick Game 1 was over in less then five minutes.

Keith talked a little bit out loud about his sideboarding options. Zvi helpfully recommended that he keep all that goblin-killing tech in his sideboard. The two players were lively and chatted up a storm as the prepared for Game 2.

Both players sideboarded rapidly and shuffled them up quickly, wanting to get Game 2 underway. It was as if the rapid pace of the first game carried over into preparation, the two players were a blur of motion preparing for Game 2.

Zvi was quick to mulligan his opening hand again, getting Keith to really start talking. "I don't think you can beat this hand, man," he said. "Turn two Oath I have."

This from the upstart, making Oath jokes to the Turboland Master.

Keith attacked with his little red man and told Zvi he was up.

"I'm up," Zvi exclaimed. Keith corrected him, "You're down."

Zvi quipped right back at him, "I'm up a game." 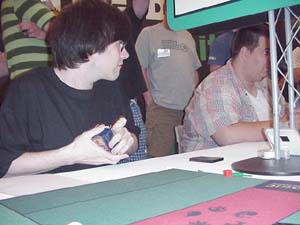 The pace of the game slowed a little as Zvi played out a turn three Sparksmith. With this many Goblins on the table people were doing a lot of math to see what you can use the Sparky for without killing yourself.

Keith cared nothing for the Sparksmith. He burned it off the table with a Gempalm Incinerator, added a Piledriver on his side of the table and sent his men into the red zone.

"I took a calculated risk that you didn't have the Piledriver," Zvi observed to Keith. "I think you might have cycled into it.

Keith was quick to correct Zvi, "I was holding it. I cycled into the Oath."

"Disastrous, you had more creatures than me."

After Game 2, The two players finally took some time laughing about DragonCon and finally settled down to play Magic. Zvi was comfortable and confident, but Keith looked a little nervous. It's possible that the pressure of being surrounded by people on the big stage was more then he can take.

Zvi even said the most profound thing anyone said about DragonCon when he uttered the now infamous "Most of the people at DragonCon are normal."

The game started at a furious pace again, with both players dropping a turn one Goblin and with Zvi following it up in true two fashion, with nothing.

Keith had a better turn two idea, which he showed to Zvi after tapping two mountains.

Keith could only respond simply as he played the Sparksmith, "I hear he's pretty good." 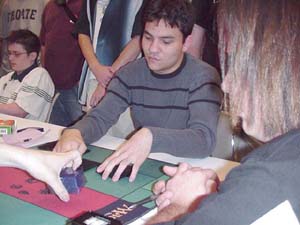 Keith had the Sparksmith in play, and he was dominating the table in a way that no other creature can do so. The Sparksmith meant that Keith could kill the Goblin Warchief that Zvi had in play, and then kill the second one that Zvi played. It did both of these things before finally dying.

Zvi sent his Grappler and Sledder back into the Red Zone, hoping to remove the Sparksmith from play. The Grappler was able to provoke the Sparksmith into blocking and they both headed into the graveyard. Zvi passed the turn back, two Siege Gang Commanders in hand and not enough land to play them.

Keith swung with his army again, sending a Goblin Warchief and a his Piledriver friend into the Red Zone. Zvi had no choice but to take the damage and was down to needing one good topdeck.

The old pro ripped the next card off of his deck. He was already holding two Siege-Gang commanders, but without the mana to play them. He looked at the new card, finding Cabal Therapy, and conceded the game.