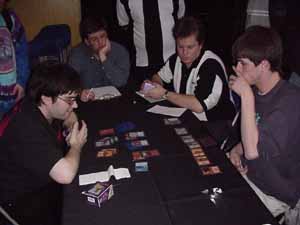 No, this wasn’t just the battle of the Z’s. Nor was it merely the blue-red mirror. No, it was really the meeting of two of the Pro Tours most strident voices. On one side sat Zvi Mowshowitz, Pro Tour Champion, theorist extraordinaire, and holder of a voice that carries well beyond any interested audience. Across from him was Mark “ScrubbyZ” Zajdner, Magic Online junky, Canadian, and the man who challenges the mighty PTR for title of Pro Tour Irritant. Both had drafted blue-red, but Zajdner’s deck had “features”, namely a pair of Riptide Shapeshifters, Quicksilver Dragon AND Kilnmouth Dragon. Both were the model of confidence as they sat down.

Mowshowitz mounted decent early pressure, while Zajdner struggled to keep up. His hand was cluttered with expensive spells. Mowshowitz augmented the danger factor when his Glintwing Invoker earned Lavamaner’s Skill and started to mow down Zajdner’s team. Zajdner was on the defensive, but his Shapeshifter showed up in time to provide a Quicksilver Dragon to stand in the way. It was soon followed by its Kilnmouth brother. 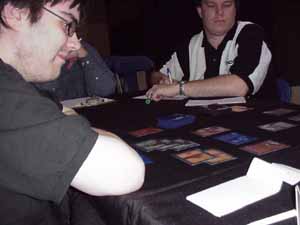 Now Mowshowitz needed to find his eighth land to turn on his Invoker. Zajdner’s Lavamancer's Skill was relatively anemic on his Keeneye Aven, but with two dragons he was able to go on the offensive. Mowshowitz drew Forgotten Cave and cycled it. Zajdner didn’t give him any second chances, pulling a Pinpoint Avalanche to eliminate the Invoker. A turn from death, Mowshowitz showed the source of his frustration. He swung with a morph and turned it over, showing Blistering Firecat. Zajdner laughed as he tapped his Aven. Mowshowitz scooped.

For game two Mowshowitz pushed the tempo even harder. He kicked off with a pair of Goblin Grapplers, then a morph. Zajdner had a morph of his own, but declined to block on Mowshowitz’s fourth turn. Mowshowitz made Blade Sliver and gave it back. Zajdner made another morph and held back. Mowshowitz charged again, trading his Sliver for a face-down Craghorn, then played Glintwing Invoker to really seize the driver’s seat. 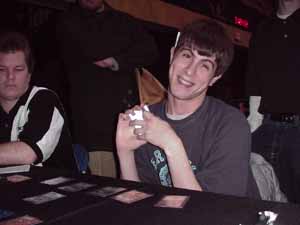 Or so he thought. Zajdner untapped and played his fifth land. Three mana flipped over Echo Tracer, sending the Invoker home, and the remaining two suited it up with Lavamancer's Skill. He shot down Mowshowitz’s morph: Echo Tracer. It was devastating.

The game was then firmly in Zajdner’s hands. He got a dragon into play and bashed the face.