Quarterfinals:A Good Problem to Have

may remember John Sittner from Pro Tour-Charleston as a member of the Jack Stanton-led team that was near the front of the standings seemingly all weekend. They had appeared to be a lock for Sunday until a couple of inconvenient pairings found them on the outside looking in. Sittner - who prefers to be called Alex - was the resident genius on that squad and built all of their decks. 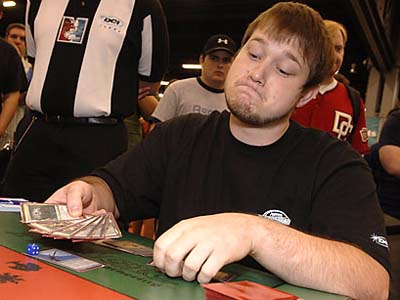 Alex was playing in his first U.S. Nationals this weekend and qualified for the event via Pro Points. His deck was a black-white Hand-in-Hand-ish concoction. For his deck the two hands in the title might stand for Hand of Cruelty and hand destruction. He was packing plenty maindeck including Rats, Grotesque, and Cry of Contrition. He had even more after board.

Hand destruction is a tricky game to play against Solar Flare, the Japanese control deck that pushed three players through into the Top 8. With maindeck Zombify, Alex could be doing Paul Cheon a favor with Cry of Contrition. Fourth-turn Angel of Despair is nice, I hear. In his player profile, Paul claimed he had no idea why he chose the deck. When I spoke to him before the match he had a different story.

Originally he had been planning on playing a black-white deck but as he prepared for the event, and as Solar Flare gained momentum in the wake of its star turn at Australian Nationals, he found he could not beat the deck with his A-list. Paul, who qualified for the event via California Regionals, made a last minute audible that has paid dividends. Considering his playtesting of the black-white/Solar Flare matchup he had to be feeling good about earning an invite to Worlds.

With Jack Stanton's world-weary cows looking on, they got the match underway. 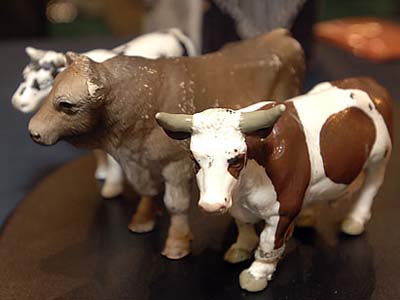 A herd of tokens waiting to stampede!

Alex led off with Dark Confidant while Paul ramped with Azorius Signet. Bob flipped up Ghost Council and he went up another card on Paul with an enhanced Shrieking Gargoyle. Cheon dumped a land and quickly recouped the card with Court Hussar.

Alex whipped out Umezawa's Jitte and sent his equipped flier into battle. On Paul's turn he considered chump blocking the Court Hussar with Bobby, perhaps sensing the Wrath Cheon was holding. After Cheon cleared the board Ravenous Rats ate a card in his hand and picked up the Jitte. Yosei had to chump the rat but it did lock down Sittner's board.

Persecute naming 'black' stripped Alex's entire hand, and Eiganjo Castle Wastelanded the one on Sittner's side of the board. Paul pressed his advantage with Meloku and made a Tim Aten token. Alex drew into Mortify and killed the legend (Meloku, not Tim) before things could get out of hand. Paul made another token - this one Kuroda-flavored - but Alex smote both player cards with his two Jitte counters.

I was impressed with Alex's resiliency, as I had written him off after the de facto Mind Twist. He played Dark Confidant in between a hard-cast Ink Eyes and Kokushu, but he was hanging in there. Cruel Edict dealt with the Ink Eyes. Now all he had to cope with was a dragon. Dark Confidant picked up the Jitte and challenged all comers. Alex had to drop to five in order to Cry of Contrition and he attacked with Bob to bring Cheon to 11.

Shrieking Grotesque drew Remand from the Californian. Sittner was going to have to use his counters to either make Kokushu smaller or to gain a little life. He went for the life boost.

Cheon Zombified the Meloku, but Sittner seemed undaunted. Grotesque spawned the birth of an illusion token, which traded. Cry spawned another token and another Cry hit the last card in Cheon's grip but it was a land that he had been bluffing as a better card.

Cheon summoned Fujita, Budde, Aten, and Kuroda to his cause. Everyone came over and the Grotesque had to step in the path of the oncoming dragon. He gained 4 life to end up at 1 when the dust settled.

He peeked cautiously at his next card, but he had no more fight left in him.

Alex mulliganed into a turn-two Hand of Cruelty while Cheon had Signet. Cry of Contrition followed up by Blackmail took two cards out of Cheon's hand. He showed off two Signets and Zombify, keeping one card as his special secret.

He played the two Signets and an Orzhov Basilica. Another Cry of Contrition took the Wrath of God he had tried to save. Paul's mana investment paid dividends when he used Angel of Despair on Alex's lone white source, knocking him down to two mana. Godless Shrine showed up the following turn. Persecute on black took out Okiba-Gang Shinobi, but Condemn kept his Angel in the upright position. 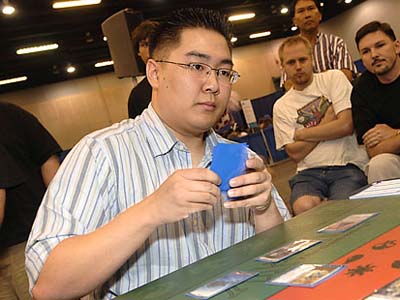 Paul Choen plays it close to the vest.

Court Hussar dug up a fresh card for Cheon, but he did not have the mana to cast his second Angel. It was binned by Shrieking Grotesque and Cheon could do nothing about the Hand. Mortify felled the Angel and Sittner swung for 4, but Cheon had a Condemn of his own to save 2 and send the Grotesque to the bottom.

The Hussar and the Hand simply traded blows but that was not a race Cheon was going to win - he was at 6 while Sittner was on 13. Compulsive Research dug deep into the deck and Cheon was able to ZombifyAngel of Despair but he still had no answer to the Hand. Alex had a third Cry of Contrition but this time he haunted Court Hussar, who seemed destined to block soon.

A fresh Court Hussar from Cheon drew a gasp from the California player, "I wish I could keep all three."

He was looking at Persecute, Compulsive Research and Yosei but I could not see which one he kept. Finally Cheon 'duressed' the Condemn by sending in the Angel. "I have to do it," sighed Sittner as Cheon gained 5 life.

Yosei was the card Paul kept, but that was also Condemned a turn later. Alex eyed the three cards in Paul's hand warily. "Wrath?"

Cheon eyeballed the two Cry of Contritions haunting the Hand - not to mention the one haunting his Hussar - and just laughed.

"I have to try." A second Hand taunted Cheon "You could still Wrath…"

The Californian played Yosei, but he was at 6 and fell to 2 on the next attack. Court Hussar number three found Compulsive Research. Alex, who was at 7, had to use Quicksand on one of the Hussars to stay alive. Paul snuck out Ink-Eyes and that was the game.

Randy, who was talking live to the room, inquired as to the John/Alex situation, and Alex explained that his legal name is John but he goes by Alex. When he won money in Charleston and filled out the paperwork, he had to use his legal name.

"Not a bad problem to have when you are filling out those tax forms because you won money on the Pro Tour," Randy announced to the crowd. "What is a bad problem is being down two games to none in the Top 8 of Nationals."

Ravenous Rats kicked off the third game and drew a Tendo. Another Rat took an Angel - a tasty Zombify target, perhaps? Cry of Contrition hit Condemn and haunted the Rat.

Paul seemed unfazed by the flurry of discard and played Meloku. 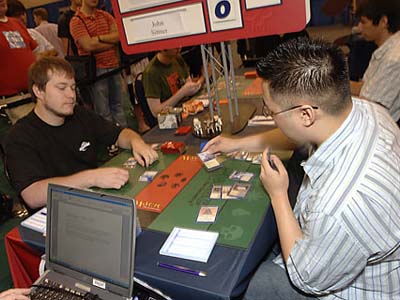 Alex was stuck on two lands while Paul was following up one legend with another - Yosei hit the table. Alex equipped his rat and attack with haunted vermin. Paul blocked with Yosei and discarded Shizo.

Final result: Paul Cheon defeated Alex Sittner 3-0 and advanced to clash with his good friend Luis Scott-Vargas in the semifinals. He was now qualified for Worlds and guaranteed at least an alternate spot on the National team.