Lundquist, described by Antonino De Rosa as the "future of American Magic," faced Alex Kudlick in the quarterfinals. Kudlick was armed with Ghost Husk, a deck designed to deploy black and white monsters, fill up with Bob, and explode with a gigantic Nantuko Husk courtesy of Promise of Bunrei tokens. Lundquist wielded blue-red Tron, a blue-red control deck willing to blow up the world with Wildfire thanks to its high-powered Urza land and signet mana base, then clean up with Keiga, the Tide Star and, if necessary, Demonfire. 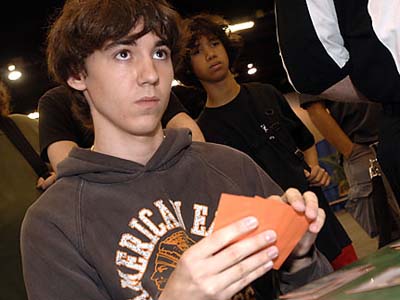 Not just another pretty face: Ben Lundquist, 'the future of American Magic.'

Both players kept their initial seven. Kudlick opened with a Dark Confidant while Lundquist deployed Urza pieces and a pair of Izzet Signets. Kudlick tried Promise of Bunrei to speed up his Nantuko Husk-based clock, but it met Remand. Lundquist showed him what speed could be with a turn 4 Keiga, the Tide Star.

Kudlick, already on the back foot, had to get things moving. He dropped Promise again, which resolved, but Lundquist swung in with Keiga and cast Tidings to restock. Kudlick's Bob revealed another Bob, and swung in. A resolved Nantuko Husk was good news, and a resolved Castigate even better.

Lundquist revealed two Compulsive Research, Wildfire, two signets, and another copy of Keiga. Kudlick took the Wildfire, but still had to deal with a 5/5 dragon.

Lundquist had a power turn. He fueled up yet again with Compulsive Research, discarding Island, then dropped a third Urza piece, completing his Tron. Two signets later he Researched again, discarding an Urza piece.

Bob revealed Castigate, which Kudlick cast immediately. It showed two Mana Leak and a Repeal as the new information. Kudlick had maintained good intel on Lundquist's hand, but had an uphill climb to turn that knowledge into a win. He took the second copy of Keiga and made a second Dark Confidant, to which Lundquist said, "Sure."

The blue dragon hit the Red Zone again. Kudlick dropped to 6 with two Bobs in play. Lundquist dropped Minamo, and had one particular legend in mind to untap with it.

Bobs revealed… land, land, and Kudlick swung in with both Confidants and a Husk. Keiga duly untapped and, after a brief firefight over a Mortify, blocked the Husk. Kudlick put damage on the stack and tossed both Confidants into the Husk, saving it and generating four spirit tokens from the Promise. Lundquist took 4, going to 11 and looking unconcerned.

Lundquist played for tempo by Repealing Husk, which committed suicide. Keiga bashed again, and despite another resolved Husk and a Jitte, Kudlick couldn't muster enough life or damage to survive the dragon's final hit.

Kudlick chose to play, and turned that advantage into a turn-two Castigate, revealing Wildfire, three signets, Mana Leak, and land. He took the counterspell. Lundquist deployed signet after signet, and cast a drawn Repeal to bounce Kudlick's fresh Dark Confidant. Kudlick replayed Bob but had no fourth land drop.

Lundquist, way ahead on mana, calmly Wildfired the board.

Kudlick was in dire straits with only Swamp for seven turns, eventually discarding Pontiff, Husk times two, Bob, and Eight-and-a-Half-Tails before finally finding a bounceland. Meanwhile Lundquist was content to rebuild his mana and hand and wait for action to counter. 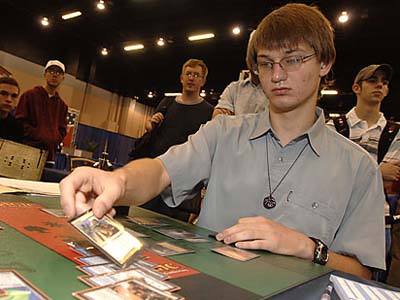 Alex Kudlick Castigates his opponent, but doesn't like what he sees.

Kudlick tried Bob: Remand. He tried Bob and Isamaru: Mana Leak and Mana Leak. Lundquist refueled with Compulsive Research, discarding Wildfire and Spell Snare, yet still had Spell Snare for Kudlick's Castigate. His mana recovered, Kudlick tried to fight the card advantage war with a resolved Okiba-Gang Shinobi, but Lundquist had Volcanic Hammer and Mana Leak for the Shining Shoal meant to protect it. A second Shinobi met a second Hammer, and then Lundquist launched a Demonfire for 13, and followed up with a second one the next turn for the rest.

Kudlick mulliganed to six, but opened with Isamaru and a Castigate. Shown an interesting hand of Simic Signet, Wildfire, two Pithing Needle and a Compulsive Research, Kudlick took the signet, trying to stall Lundquist's mana engine and put the hurt on. Lundquist took the opportunity to set a Pithing Needle each on Okiba-Gang Shinobi and Jitte.

Kudlick put the pedal down with Dark Confidant and Promise of Bunrei. Lundquist cast Compulsive Research, discarding Minamo, and then completed the Urzatron the next turn and dropped a Hammer on Bob's head. The enchantment made good its Promise of four spirits. 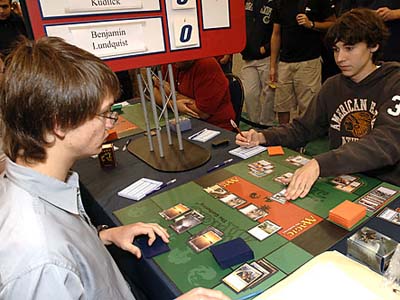 Kudlick's team faces off against an army of one.

Isamaru and spirits crashed in for 6, bringing Lundquist to 6, and Husk joined them. But Lundquist had Shivan Reef, his crucial second red mana, and Wildfired. Only Husk survived on Kudlick's board.

Husk swung in and hit Lundquist down to 4, but Lundquist, flush with answers, produced the Volcanic Hammer for the unprotected Husk.

Both players entered draw-go mode, replenishing their land base. Kudlick had the first move, trying 8.5 Tails, but it met a Remand, then the next turn, a Spell Snare. Lundquist had taken pain and mana burn from his awkward mana, however, and was down to 2 now. He Mana Leaked Husk and got down to business with Meloku.

Kudlick had Okiba-Gang Shinobi and a plan to stave off the sweep. He held Shining Shoal and looked to point Meloku's power of 2 into the face of its master. Lundquist made two more illusions and swung over for 5, but Kudlick was tapped out from the Shinobi and had no white card to pitch, so he took the damage, down to 10.

An illusion token chump-blocked the Shinobi. When Meloku and friends attacked back for 5, Kudlick tried a Shoal for 2, with enough mana open to do it again. Lundquist Remanded the first Shoal, then Mana Leaked the second, with one untapped mana free to make an illusion token for the final crucial chump-block on the ninja.

Kudlick, out of gas and facing a lethal Meloku squad, extended the hand.

Ben Lundquist advances to the semifinals to play for the championship and membership on the U.S. National Team!