Even though a big part of the Pro Tour is about competition and big money, you don't need to be qualified for the big show to have a good time. Between side events, artist signings and having the chance to watch the best players in the world compete, you can also play the Question Mark Game Show. At every Pro Tour, Mark Rosewater holds a game show style competition, where teams of three compete to prove their knowledge of Magic trivia. "I've been doing trivia since '94, so we're coming up on ten years of me doing trivia. When the Pro Tour started with Pro Tour 1, I thought it would be fun to do a Pro Tour trivia game show." 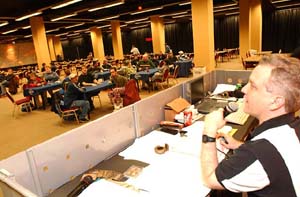 "Here's how it works. You have a team of three or less, and the game show is run like a tournament. We have five rounds of swiss. Every team is paired up against another team, and I ask everyone the same question. If you do better than the team you're paired up against, you win the match. Just like a normal tournament you get three points for a win, one point for a draw, no points for a loss." Not to worry, even if you're not a knowledgeable Magic historian, it's possible to make Top 8. "Usually there's about fifteen teams, and we have five rounds. Yesterday the 2-2-1's got in, so you have a lot of latitude." Also, the questions are varied enough to keep things interesting. "For example, last night, round one was about creature types. Round two was about Magic firsts, round three was about languages Magic was produced in, round four was about artists, and round five was about Pro Tour winners. The Quarterfinals was about design and development, the Semifinals was about naming the first card alphabetically for each set, and the finals was about Magic titles."

The game usually takes two to three hours, and everyone gets a prize regardless of how well you do. "If you're ever at a Pro Tour, it costs nothing to play, and every team if they wait until the end gets a prize! It's the best bargain on the Pro Tour." The cross section of Magic players who participate is also very interesting. Last night, World Champion Carlos Romao played, as did a French team including Raphael Levy and Gabriel Nassif, along with local players. Additionally, it provides something at Pro Tour events for players who aren't necessarily into high-level competition and just want to show up and have some fun. "There are lots of different parts of Magic. Obviously the Pro Tour is all about the competitive aspect, but there's another part that I've always enjoyed which is that there's all this knowledge, and we keep making more cards so there's all sorts of interesting things, be it flavor text, art, mechanics, themes or behind the scenes stuff. I celebrate that in the Question Mark Game Show. You might not be good enough to make it on the Pro Tour, but maybe you're good enough to name flavor text off the top of your head."

For those who don't have the Pro Tour coming to an area close to them who want to test their trivia knowledge, Question Mark is an ongoing feature right here on Sideboard Online. Below is a taste of what you can expect when you come to a Pro Tour and play in the game show. Give it a shot, and see how well you do. If you find yourself getting a lot of these questions right or just have fun thinking about them, your Pro Tour experience could be highlighted by participating in the real thing.

List the ten languages Magic has been printed, in the order they appeared.

From Arabian Nights through Prophecy, name the card that comes first alphabetically in each set.