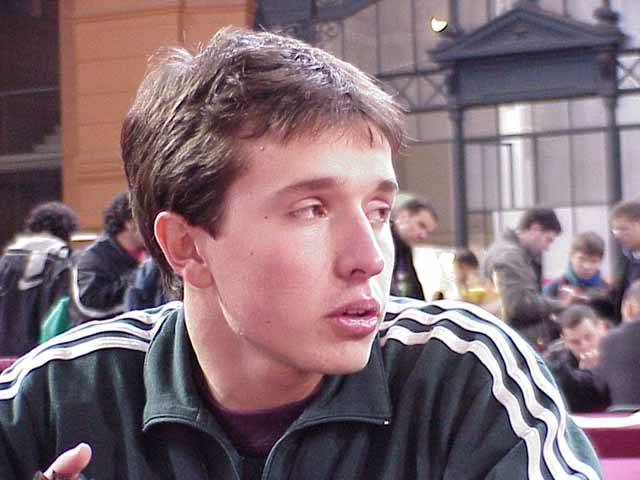 Rafaël Le Saux was probably the revelation of the tournament, being the only Chilean making it into the Top 8 at this year's Magic: The Gathering Latin America Championship.

Rafaël chose to lay his Accelerated Blue deck, a deck featuring a whopping 17 counterspells of various kinds (Daze, Miscalculations, Counterspells, Rewinds and Thwarts) and a distinct variation from other Accelerated Blue decks: no Powder Kegs. This variation makes his deck weaker against creature-based strategies like Angry Hermit (which claimed two spots within the Top 8), yet it improves his performance against other decks like Replenish and Wildfire, which are present in the Top 8. Not using Powder Kegs, Le Saux is practically forced to play with 4 Treachery, a card that has fallen out of grace somewhat with modern Accelerated Blue players. Rafaël's deck uses 6 very efficient creatures: Masticore, for creature removal and beatdown, and Jesus (otherwise known as Morphling) to seal the deal. He chose to play this deck because he feels that it does extremely well against decks as Replenish and Draw-Go (another mono-blue deck, featuring Thieving Magpie for card-drawing and a high number of counterspells). Le Saux's deck choice paid off in the end because the Latin-American championships featured 19 Replenish decks, of a total of 60 players. He rounds off his mana-base with 26 lands: 20 Islands, 2 Dust Bowls and 4 Rishadan Port. Above all, Rafaël feels that his deck is consistent and can do well in the Top 8.

Rafaël has been playing Magic for the past 4 years, ever since the release of the Mirage expansion, ad is currently a part of Team "La Vieja de Jaramilla", a Team which has done very well in Chile's latest big tournaments, winning their Nationals and also claiming the Second position, as well as having 4 players qualified for the World Championships in Brussels this August. All four players of this team will be attending the World Championships and are hoping to show the world that Latin-American Magic is not behind the rest of the world.

His first match in the Top 8 pits him against Brazil's Eduardo Simao Texeira, playing a Wildfire deck, a very aggressive deck featuring lots of fast artifact mana reminiscent of Kai Budde's World Champion deck from the 1999 World Championships. When asked about the matchup, Rafaël seemed confident. "We already played during the Swiss, and I won 2-0", says Le Saux. "The key to beating Wildfire decks is not letting his Boils resolve". Boil is an excellent card in this matchup because it compliments Wildfire itself, and leaves the Accelerated Blue player without his most vital resource: mana. The Wildfire deck has few threats against a mono-blue deck: Wildfire, Covetous Dragon (but with Treachery, this is less of a threat), 2 Tectonic Breaks and 2 Mishra's Helix, as well as Temporal Apertures. Playing with 17 counters, Rafaël will have enough for Eduardo's threats, but Counterspells like Miscalculation and Daze become useless very fast against Wildfire-based decks, due to their extremely high artifact mana count. But seeing that Rafaël defeated Texeira in the Swiss portion of the tournament, he's not extremely worried.