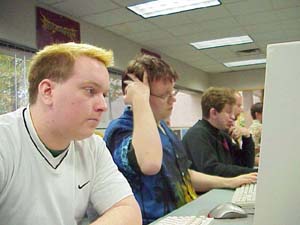 Jens Thoren is the silent and reserved yin to teammate Tomi Walamies cheerful and shiny-shirted yang. He's also one of the World's best, and it's no surprise to see him crest to the top of the standings after nine rounds of play. He's looking to keep his good fortune running as he heads in to the Rochester Draft.

The whole of the draft can be replayed on Magic Online, so be sure to check it out.

The random seating put poor Chris Pikula in the hated first seat, followed by Romao and then Thoren. The rest of the seating fell: Ruel, Davis, Shvartsman, Wise and Finkel. Pikula cracked the first pack.

He signalled white for Gustcloak Harrier. Romao kept mum taking Slate of Ancestry. Thoren jumped on Battering Craghorn, the only red card in the pack. Ruel followed with Fallen Cleric, shipping Crowd Favorites to Brian Davis. Things were pretty co-operative on the opposite side of the table, until Finkel took Battlefield Medic in front of Pikula. At least he smiled when he did it.

Pack two saw Romao weigh in as a black mage with Death Pulse. Thoren was happy to take Shock, while Ruel shifted to white for Gustcloak Sentinel, much to Davis's chagrin. He went red for Erratic Explosion. Pikula wheeled Shepherd of Rot & Fallen Cleric, sticking it to Romao.

Things were quiet for a while. Thoren got a Sparksmith, and then decided to fill in with green for Elvish Warrior, despite Pikula moving in for Krosan Tusker. A little friction was fine. In pack five, Romao got busy and cut off a Wirewood Elf. He relaxed a little in the second, but come pack seven he decided he needed to pair his black with Red, sticking the knife in Thoren. It was extra tricky, considering Finkel was putting his toe in red also.

At the end of the first set of packs, the table looked something like this:

Pack nine hit the table for the switchback, stuffed to the gills.

Silvos made it three seats to Shvartsman, and there was still a Gourna for Thoren and a Wretched Anurid and Charging Slateback for Romao. In pack ten, Thoren took Symbiotic Elf over Towering Baloth, which went to Pikula. It was all pretty reasonable, with Solar Blast and some filler cards. Around the end of the pack, Davis moved into black, giving some more room to Thoren.

The last group went very quickly, but plenty of gold wound up in Thoren's pile. Elven Riders and Skirk Commando started things off right, and things wrapped up pretty quietly.

Thoren wasted no time putting his deck together. His seven best red cards went in first: two Craghorns, two Commandos, Shock, Sparksmith and Solar Blast. His green cards were significantly deeper. The first pass had him at nineteen cards.

Even the last line of cards came fast. Both Skittish Valesks enabled maximum morph uncertainty for his opponents. Goblin Sledder augmented the already nutty Sparksmith as well as providing a solid combat trick. He wavered on the very last card for a moment, but finally settled on Vitality Charm.

Overall, he was satisfied with his deck but not thrilled. For all his solid card quality, he's without bombs. Also, fighting for red had left him light on removal. He didn't anticipate a 3-0, but had his sights set on a 2-1 performance.