Rookie of the Year: Yuuya Watanabe 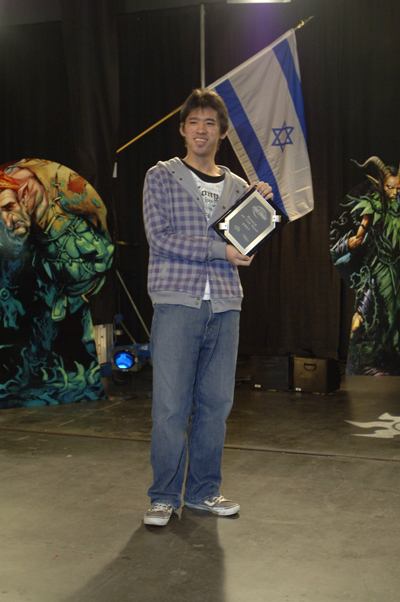 At the beginning of this season, “Yuuya Watanabe” was not a name that struck much fear into the hearts of opponents. That is likely to change after the Japanese upstart managed to take home the Rookie of the Year title this weekend at the Magic World Championships. As tight as the Player of the Year race was, the Rookie race might have been closer, featuring not one but two Pro Tour champions in the running by way of Jacob van Lunen and Chris Lachmann’s co-win at the Two-Headed Giant Pro Tour in San Diego. Did that type of competition intimidate Watanabe?

“After Grand Prix–Kyoto I felt I could win. I aimed to win.” Still, no matter how competitive a spirit one possesses, reaching such success does come with some fortune. “I feel I’m good, but I was a little surprised [to win].”

The Japanese player, who started playing during Invasion block, cited two things that deserved credit for his success: Player of the Year Tomoharu Saito and a special Japan-only tournament called “The Planeswalkers Cup.”

Said Watanabe: “Saito is my good friend and rival.”

No doubt testing with a player like Saito helps one succeed at the highest level, and probably helps take some of the fear of competing against “name” players on the world’s most competitive stage away. Who’s afraid of other pros when your usual testing partner is a Pro Tour champion and Player of the Year?

Speaking of which, did Watanabe hope to follow the success of his mentor by chasing after the Player of the Year title, even though Saito had already admitted he was going to try to do the same the following year?

Before leaving I asked a final question of the Rookie of the Year: Was he excited about winning the honor?