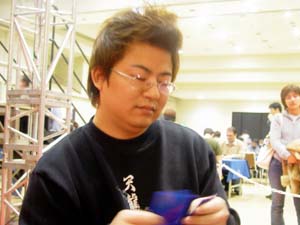 over fifty Japanese players competing this weekend, it's no wonder that two of the best would find themselves matched up in the first round. Both of these players are a lock for anyone's Top 5 Japanese Players list, thanks to resumes boasting strong Grand Prix and Pro Tour victories in both singles and teams. Okamoto wore his usual careful expression, but it was offset by his hair being swept up into a pompadour. Morita hid behind low bangs and shuffled his deck quickly with his long angular fingers.

They conducted the first few turns in silence. Okamoto had a pair of Talismans in play by the end of his third turn along with various red and green lands. Morita played only mountains, and set him back with Detonate. Okamoto had the fourth land to make sure his Arc-Slogger showed up on time. Morita passed his fourth turn with no play.

The Slogger bashed in and Okamoto waited on a grip of removal. Morita dropped a Solemn Simulacrum, but that was just an excuse for Okamoto to play his Viridian Shaman. At least Jens had given him an extra mountain, so his Fireball could dispatch the Slogger. He took four to the face for his trouble. Eight life was a precarious position. The Shaman made it six.

All Morita could do was clear it out of the way with Electrostatic Bolt. Okamoto dropped him to two with Fireball, and on the next turn showed him Pyrite Spellbomb, taking the first game. 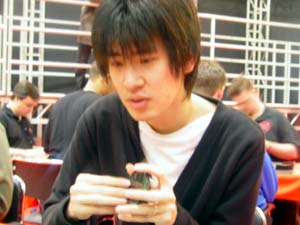 Again Okamoto kicked things off with a pair of Talismans, but this time Morita stalled on two lands and had no Detonate. That meant he had nothing to slow down consecutive Sloggers from Okamoto.

He found a third land and activated his Blinkmoth Nexus, gearing for a chump block. Okamoto milled himself for ten to get rid of it, and when Morita used it to fuel a Shrapnel Blast aimed at one of the Sloggers, Okamoto showed him Shunt. That was enough to get him to pack it in.