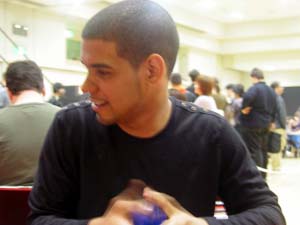 was playing affinity and sent back his initial seven when he saw no lands. Williams laughed, "There is going to be a lot of that this weekend. PT Mulligan. Everyone is cheating on lands playing sixteen--even fifteen lands."

While Eugene shuffled in hope of a better six cards, Dave watched the nearby match between Kibler and Kastle. "I can't believe that I am playing on a Pro Tour were 1/1s for one and Ornithopters are good." Dave's mulligan prediction bore true when he looked at his hand and sent it back as well. Dave was playing red-green anti-affinity with Furnace Dragons.

Eugene opened with a Darksteel Citadel and a Chromatic Sphere. Dave played a Forest. Eugene top decked a Seat of the Synod and cast one of the three Thoughcasts he was holding. Dave played a Mountain and cast Talisman of Indulgence. He used the red from the Talisman to Detonate Eugene's blue source--Eugene played a Tooth in response.

On Eugene's next turn he missed his land drop but still mustered Frogmite and Skullclamp. Dave played a Solemn Simulacrum and found a Mountain. Eugene cycled his Sphere for a blue to Thoughtcast and found another indestructible land. He clamped the Frogmite and sent it across into the red zone. Dave elected not to block and he took four thanks to the Tooth.

Dave attacked for two and played another Simulacrum. When Eugene attacked this turn Dave put his creature in the way. Dave drew one and Eugene drew a pair. He played an Arcbound Worker, Frogmite, and Myr Enforcer. He cycled the Worker with his Skullclamp and made his Frogmite a 3/3. He did not play a land and sent the turn back with six cards in hand.

Dave had eight mana but no play and sent the turn back with the Simulacrum holding the fort. Eugene played a Vault of Whispers and dropped a Disciple of the Vault. He Skullclamped the Frogmite and it and the Myr Enforcer came in and the Simulacrum blocked the Frogmite. When Eugene pumped the Enforcer Dave killed it with Oxidize--Dave took one from the Disciple's ability. Eugene played another Frogmite and equipped it with Skullclamp.

Dave played a Furnace Dragon and all the artifacts in play were removed from the game. "That was hot…HOT!" Eugene was left with only a Disciple of the Vault, which was not a factor in the play since the removal from the game of artifacts gets around the Disciple's ability. Eugene played two Ornithopters a Vault and a Chromatice Sphere on his next. Dave admired Eugene's ability to bounce back, "He doesn't even care this guy…he has plenty of cards."

Dave attacked for five but had not follow up play save for a Talisman. Eugene drew two cards deeper with his Thoughtcast. Dave got in for another five and played a Talisman and a Megatog. Eugene played another Thoughtcast off of a Glimmervoid, "That's all four," shrugged Williams. Eugene looked at his board and double checked his math, "You're at ten?"

He played an Arcbound Ravager and was able to activate it five times--triggering the Disciple for five points of precious life. He then attacked with his Ornithopter and sacrificed the Ravager to give it +5/+5. Dave was aware that this was a possibility but keeping his Dragon back would not have helped as Eugene had two Ornithopters and could have given the Ravager bonus to whichever creature was unblocked.

Dave's eyes widened as Eugene put nearly every card from his sideboard in for Game 2, "What do you have there a fifteen card sideboard for me?"

Dave kept his openers but Eugene shipped his back for the second time in the match. Dave flipped through his hand to show off a Trinisphere and stage whispered, "Hot!"

Dave kicked off with a Mountain and Eugene played a Citadel, Ornithopter and a pair of Chiss-Goria parts. Dave Bolted the Ornithpter EOT. Dave played a Talisman and a Trinisphere. Eugene played another Ornithopter and a Frogmite. When Dave played an Arc-Slogger on the next turn he could only attack for one with the Ornithopter. Dave followed with a Solemn Simulacrum. Eugene paid three mana to Terror the beast and sent his Frogmite across the red zone. Dave put his Simulacrum in the way and Eugene saved it with a Scale. 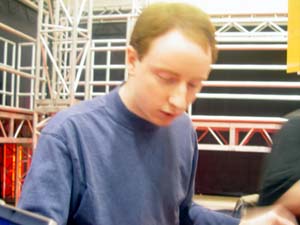 He played another Simulacrum on his next turn and Eugene followed by paying three for a Broodstar. Dave passed his next turn without any play and took eight from the flier. He used Electrostatic Bolt on his own Simulacrum EOT to find some answer but he found only land. He laid the lands in hand out before Eugene and extended his hand.

"That is not the way it supposed to go."