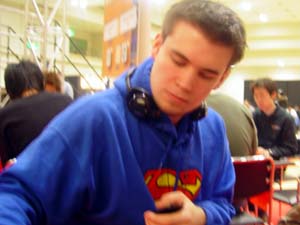 Jon Finkel didn't come to this event, Darwin Kastle is now the only player who can claim he has competed in every single Pro Tour. Interestingly, this almost wasn't the case. "I didn't have the money to come, but a friend of mine lent me the money. This is the last one I'm qualified for, so I was pretty worried about it."

The last time these two played was at Pro Tour Houston. Kastle taunted Kibler a bit, telling the story of how he won one of the games.

Kastle - "Kibler let a card slip out of his hand by accident- it was a Counterspell, and I cast Cabal Therapy naming it. He had another one on his hand."

Dave Williams (turns to Kibler) - "You dropped a card in your hand? HAHAHAHA!"

Kibler had worked with Your Move Games for a few events, but for this Pro Tour he went back to testing with Ben Rubin and Huey.

Both players started with Arcbound Workers, and Kibler played a ton of 1/1s on his next turn, bringing out another Worker and a Myr Moonvessel. He attacked, and slammed down Tooth of Chiss-Goria to deal an extra point of damage. Kastle played Arcbound Ravager and ended his turn. Kibler brought out Disciple of the Vault and Myr Enforcer, giving him a ton of pressure on the board.

Kibler - "Usually I like having a hand on turn three, but this is neat too."

Pyrite Spellbomb dealt with the Disciple, but Darwin was still in trouble. Kibler's next attack brought him down to ten life, but the Ravager was able to survive combat after damage went on the stack. Kastle untapped, and began to stabilize as he played Myr Retriever, and killed it with Skullclamp to draw two cards and bring back the Worker. Just when it seemed that Kastle was going to pull ahead, Kibler drew his own Skullclamp and got to work getting more resources into play. An Enforcer attack got through the Ravager to bring Kastle to three, but Kastle had a Disciple of the Vault that posed a serious problem. He took his turn and played a few more artifacts, allowing him to sacrifice his board to win the game. 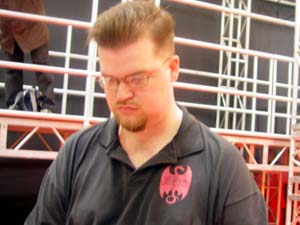 Kibler mulliganed down to six, and didn't seem too happy about his next hand. Kastle had Ornithopter and Arcbound Worker, and Kibler missed his second land drop. Skullclamp let the Worker provide some cards and a +1/+1 counter for the Ornithopter, and Kibler found a second land to play a Ravager. Kastle played a third Worker, and Kibler played Chromatic Sphere along with Frogmite. The Ornithopter became 3/5, and Kastle summoned a Ravager of his own. Kibler sacrificed Chromatic Sphere for green mana, and killed it with Oxidize. He was putting up a fight, but with only two mana in play and Kastle's Skullclamp making the game more one-sided with every turn, the result became inevitable; two Disciples of the Vault finished it.