Round 1: Akira Wakuri vs. Yuta Wada 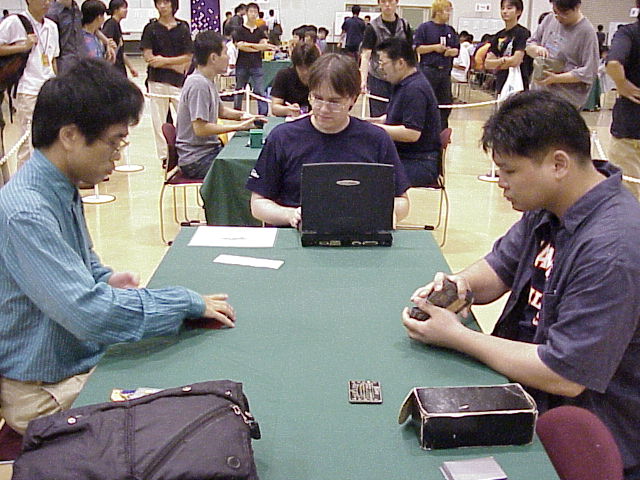 There is an awfully big mountain looming on the horizon today. Every player has to climb an Everest of 1350 opponents. No one can argue that the task is daunting. Nonetheless, these first two to step into the pit did not hesitate, determined to begin the treacherous ascent.

Akira Wakuri hails from Tokyo and is a popular writer for the Japanese Magic media. His current assignment is explaining the Pro tour phenomenon and explaining to the Japanese readers how pivotal the Pro Tour is to the Magic community. His words will have a lot of relevance to the lucky few who manage to scale the imposing peak. Wakuri is playing a version of the popular blue-green deck, a host of counters, Repulses, and the potent offense of Blurred Mongoose, Gaea's Skyfolk, and Spiritmonger.

Grand Prix Kobe is Yuta Wada's second Grand Prix, and he maintained a composure of steel seriousness. His offense relied on a scant set of Shivan Zombies and Nightscape Familiars, trusting in countermagic, bounce, and Urza's Rage to wrap the late game up.

Both players came to the table with a relaxed demeanor, and even at the beginning of the tournament the spectators quickly came to roost. Wakuri grinned and laughed with the bantering judge. However, as they presented their decks for the shuffle, the two suddenly donned a severe game face. Using the age old arbiter of decisions, Jan-ken-pon (Rock Paper Scissors), Wakuri's fist smashed Wada's scissors and the writer opted to play. Given this constructed format's heavy focus on tempo, Wakuri selecting to play first was no surprise.

In game 1, the first spell to hit the table was a Shivan Zombie headed by Wada. Wakuri refused to appear rattled despite missing a land drop on turn 3. A second Zombie joined his brother in arms. Wakuri wasn't getting the blue necessary to slow Waka's rapid assault, and a turn 4 Fact or Fiction revealed Yawgmoth's Agenda, a second Fact or Fiction, and 3 lands. Wada scored 3 lands and the Agenda, then discarded an Urborg Volcano. Finally on turn 6 Wakuri found a Yavimaya Coast to end his blue drought. But the Coast was too little and too late as Wada Undermined a Repulse to get the concession.

After the flurry of action subsided, both players' composure remained granite despite the spectators taken aback by the speed of the five minute match. Both players sided in Gainsay, with Wada adding Excludes while Wakuri removed his Vodalian Zombies and a Crypt Angel in favor of Disrupts. Wada didn't get to see much of Wakuri's deck (a Repulse and Mystic Snake), so it appeared that Wakuri would have the advantage.

Wakuri again elected to play, and led off with a Blurred Mongoose that momentarily cracked Wada's cool. Wada's handful of Excludes, Terminate, and Gainsay had nothing to stop Wakuri's turn 2 Blurred Mongoose. A brief pause came over the match, and then a short burst of counter warfare broke out. Wakuri brought a Skyfolk to the party, Wada checked the guest list with an Exclude, but Gainsay brought the Flying Fish to the table. The pace of the game slowed from lightning fast to a more measured flow.

Wakuri appeared to be dismayed when the Flying Fish met a Terminate, but had a small grin as his Spiritmonger hit the table. A pair of main phase Repulses gave Wada two turns of Monger respite, but Wakuri continued to insist on playing the massive monster again and again. Frustrated after failing to draw an answer, Wada conceded at 12 life. While this writer feels that Wada could have possibly bought a few more moments with the Ice in hand , perhaps Wada felt that keeping the remainder of his deck unseen would be worth the strategic advantage.

Wada started the dance with a Nightscape Familiar, was offered a Gaea's Skyfolk to face, and grabbed more tempo with a Repulse. Wakuri pondered for a grimacing minute to drop a land and recast the Skyfolk. To his dismay, the Fish was poached over a 1 mana Fire. Wada cast a fantastic Fact or Fiction, turning over 3 Undermines, an Urza's Rage, and a Swamp. Wakuri shouted "Sugei, sugei (wow, wow)!" as he faced a less than appealing split. Wada opted to grab a Swamp, Rage, and a single Undermine. Wada took the opportunity to cast his own Fact or Fiction and take a Gainsay, Skyfolk, and Forest over a Mongoose and yet another Fact or Fiction.

Wada was the next to cast a "bear" with a Shivan Zombie. Wakuri responded with the speedy fury of the Blurred Mongoose. Taking one for the team, the Mongoose traded with the Shivan Zombie. Over the next four turns, the Nightscape Familiar offensive couldn't be halted as both players played their 2/2 Skyfolk and Shivan Zombies twice after Repulses. After 3 more turns, the Nightscape Familiar damage was finally stopped and both players resolved to switch to a control mode.

Wada had the advantage sitting on a pair of Undermines and an Urza's Rage, and could afford to play the waiting game. He allowed Wakuri to cast Fact or Fiction and score an Exclude and Snake over an Undermine and lands. The board continued to stall until both players had a full hand. Wakuri then allowed Wada to successfully cast the match's fourth Fact or Fiction, which was split into a Nightscape Familiar and Urza's Rage, and 2 land and a Gainsay. Wada's game face remained resolute as he scooped up the Rage and Familiar. Seeing that his future looked short and messy, Wakuri initiated a rapid countermagic war over Wada's Nightscape Familiar. Exclude met Gainsay, and while Spiritmonger finally came into play, the brutal fatty came far too late to stop the lethal Rage. Wada sighed in relief as Wakuri humbly offered the concession and thanked him for the game.