Round 1: Alex Shvartsman vs. Brock Parker 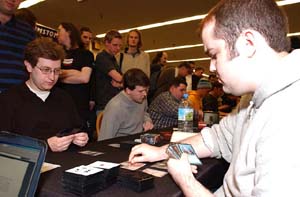 As the players sat down for their match, Alex wondered out loud why he had been chosen for a Feature Match. As Brock took out his Battle of Wits deck piece by piece, one could see the light bulb of realization go off in Shvartsman's head. Parker is running the same deck his friends Huey and Linde ran in the Gateway. Shvartsman seemed amused by the situation, noting "I hope I don't lose to you...that would be really embarrassing." Noah Boeken put in his own two cents from the crowd telling Alex "This is the matchup you wanted, remember? You think this deck is awful, and you offered to play for $100 a game against Huey!" Both of these players faced off in the last Masters tournament, with Shvartsman picking up the victory. Shvartsman pointed out that this was Parker's opportunity for revenge.

Shvartsman drew his hand and begged, "For the love of God, please don't mulligan!" He missed his third land drop, and noted "Starting with two lands is usually not a good thing." Meanwhile, Parker accelerated his mana with Charcoal Diamond. Tainted Pact brought Parker to Disrupt, and Shvartsman drew Salt Marsh, finally giving him a third mana source. Parker then played Battle of Wits to the amusement of the onlooking crowd, and Shvartsman added Counterspell to the stack, but Parker was waiting with Disrupt. Shvartsman drew, and conceded, resulting in plenty of laughter and cheers from the crowd. Kibler mentioned "During my upkeep, I'd like to put winning on the stack!"

During sideboarding, Shvartsman joked "I'm bringing in all of my anti-Battle of Wits cards! Traumatize!"

Luck continued to not be on Shvartsman's side this match, as he mulliganed his opening hand. Parker mulliganed as well, noting that it was "Unfortunate for both of us", and he went to work shuffling his behemoth of a deck. Shvartsman brought out Nightscape Familiar on turn two, while Parker played Sleight of Hand. The Familiar came through for a point of damage and was joined by a second, and Shvartsman missed his third land drop for the second time this match. Parker brought down one of the Familiars with Urza's Rage. Shvartsman drew a third land, smashed with the Familiar, and kept mana untapped and ready.

Parker then played Marble Diamond, and had no white sources out at the time. This was enough to convince Shvartsman to Counterspell it, and Parker played Coastal Tower. Fact or Fiction was cast by Parker a few turns later, and countered with Gainsay. He then untapped and brought out Flametongue Kavu, which was Memory Lapsed. The "FTK" came back on the next turn, and was Counterspelled. Shvartsman's lone familiar continued to attack, and was being helped out by Parker's pain lands. A second Familiar joined the team, giving Parker less time to stabilize. He played Void for two to slow down the beats, but Shvartsman had enough mana to regenerate one of his Familiars 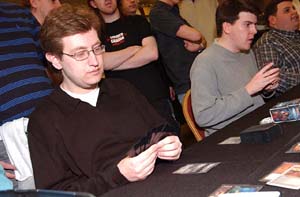 Prophetic Bolt was played on the Familiar during Shvartsman's end step, and was countered with Gainsay. The next turn saw Parker Recoil the Familiar, and Shvartsman discarded Underground River. Parker then untapped and played a main phase Fact or Fiction, which resolved. The pile presented were Yawgmoth's Agenda, Lobotomy and Spite/Malice, Fire/Ice, Gainsay. Parker now had a very tough decision to make. He could take the utility spells and try to finesse his way out of the situation, or take the Agenda, hope it resolves, and use all the resources in his graveyard. After some thought, Parker took the three card pile. The other problem was that Parker was at very low life, and had quite a few painlands out, so it would be difficult to take full advantage of his spells.

The Familiar came back out, and was Iced on Shvartsman's next upkeep. Shvartsman played Lobotomy, Parker added Spite to the stack, and Shvartsman cast Counterspell, allowing Lobotomy to resolve. He had the choice of Diabolic Tutor, Gainsay, Spite/Malice or Adarkar Wastes. Shvartsman chose to take Gainsay out of Parker's library. Shvartsman looked over Parker's deck to make sure there was "nothing out of the ordinary" in it. That comment amused this reporter quite a bit. I couldn't help but ask, "Nothing out of the ordinary? Look at his deck!" Parker agreed, noting "Yeah, it seems to be all in order for a 244 card deck."

Parker now played Diabolic Tutor, which brought him down to two life points due to his painlands. He fetched Flametongue Kavu, and summoned it to shoot down the Familiar, going down to one life. Parker tapped his mana incorrectly for the tutor, using a mountain for colorless when he could have used the colorless option on a painland instead. Shvartsman then played Upheaval, resetting the game. He did not have to discard any cards afterwards, while Parker discarded four lands. Sleight of Hand gave Parker Wild Research a few turns later. At this point Parker was stuck at four lands, which makes his decision to discard four lands after the Upheaval questionable, although Parker was likely assuming he would draw more lands in the upcoming turns. 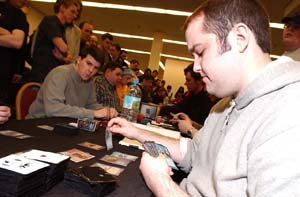 The next few turns saw Parker draw and discard, as he was hesitant to tap out and let his guard down. Shvartsman simply played land after land, and sat back comfortably on a sea of islands. Parker discarded Urza's Rage at one point, which seemed like a bad idea once Shvartsman brought out Shadowmage Infiltrator. A counterwar resulted, but Alex had more lands available, and was able to out-counter Parker. Finkel was now on the board, and Parker had to do something quick before it became active. He untapped and played Duress, which was Memory Lapsed. He followed that up with Hobble, which Shvartsman Counterspelled. Parker shrugged and scooped, bringing the match to a third and deciding game.

While shuffling up for Game 3, Bob Maher asked Shvartsman, "Hey Alex, how much do you think Brock's deck is worth? How much could you sell that for in Japan?"

Parker accelerated on turn two with Sky Diamond, while Shvartsman played "My Sky Diamond!", Nightscape Familiar. Parker had Flametongue Kavu which caused a minor complaint to come out of Shvartsman, and Maher quipped, "Come on, it's only 244 cards!" Parker's Fact or Fiction was Syncopated, allowing Parker to resolve Concentrate. The Kavu continued to bash for four points of damage, and Shvartsman played Fact or Fiction on end step, which was Absorbed. Parker played Duress on the following turn, and Shvartsman responded with Fact or Fiction. After a lot of thought, Parker allowed it to resolve. The piles presented were three lands and Gainsay, and Counterspell. Shvartsman took the four card pile. Shvartsman then Memory Lapsed the Duress, which Parker Counterspelled. Shvartsman revealed a hand with lands, two Gainsays and Upheaval, and Parker was quick to relieve Shvartsman of his reset button. This left Shvartsman with no answers, and no other option but to extend his hand.