ittle introduction was necessary for the two players in the first feature match: Gadiel Szleifer and Mike Hron. Szleifer, a Homewood, Illinois native, is as famous for his sometimes brash attitude as he is for his dominating performances on the Pro Tour, including a championship in Philadelphia. Hron, on the other hand, is known for his drafting skills rather than his tongue, having raised the championship trophy at Pro Tour Kobe this year, the first time an American had done so at an individual Limited event since 2001. 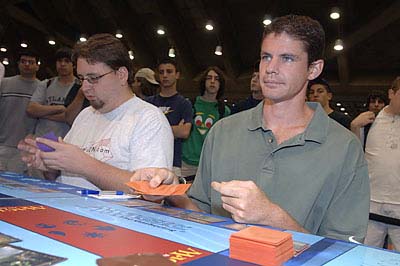 Hron won the die roll and chose to play first. Neither player needed a mulligan, and each led with a tapped land-Treetop Village for Hron and Breeding Pool for Gadiel. The two players remained stoic and mostly silent while throngs of onlookers crowded the ropes to get a glance at the Pro Tour Champions. At the end of three turns the board consisted of two Islands, Breeding Pool, and Wall of Roots for Gadiel with an Ohran Viper and Remand in the graveyard, and Blood Crypt, Stomping Ground, and Treetop Village for Hron, who had used an Incinerate to kill the Viper, though it took him two tries after the counterspell.

Mike appeared to threaten some type of aggro deck with red, green, and black lands, but he wasn't being very aggressive. His first creature of the game, Giant Solifuge, met a Mystic Snake from Szleifer, who used the 2/2 to go on the offensive, putting the score 20-18 in his favor.

Hron went into the tank. He was falling behind on tempo after Szleifer had used a Riftwing Cloudskate to put the Wisconsin native further behind. After some thinking he opted to play a second Solifuge, hoping to force a threat onto the table while Gadiel had only a Plains and a Wall of Roots for mana. However, a champion like Szleifer wasn't going to allow a lack of untapped blue mana to keep him from playing counterspells. He used his two mana to play a Momentary Blink targeting his Mystic Snake, returning it to play and triggering another counterspell. Solifuge hit the bin and Hron was in a tight spot, though you couldn't tell from looking at him.

With the score 20-10 in favor of Szleifer, the Chicago native charged into the red zone with a Treetop Village, Riftwing Cloudskate, and Mystic Snake. Hron was quick to Char the Cloudskate, forcing Szleifer to burn the flashback on his Momentary Blink. The Skate re-entry bounced Hron's Treetop Village but opened the door for Hron to use Incinerate on Szleifer's copy of the 3/3, leaving himself taking only 2 from the Snake. His mainphase Incinerate took out the Coudskate while Szleifer was tapped out, and he looked to be stabilizing.

Unfortunately, Gadiel had other plans adding a Loxodon Hierarch to the board. The ensuing attack forced Hron to block with both a Treetop Village and Dark Confidant, and post-combat Szleifer had the second Elephant. Hron had Tarmogoyf from the top of his deck, and Gadiel had to take a moment to see what card types were in the graveyard. To his surprise, he saw not enough to survive a block in front of the Elephant, and Hron packed in Game 1.

Both players remained silent while sideboarding, despite the fact they live relatively close to one another and competed on the same PTQ circuit before achieving Pro Tour fame. Hron gave no sign that he was upset at losing or whether or not he had even gotten an aberrant draw for his black-green-red deck, while Szleifer offered no indication that he was excited to be up a game in the first feature match of the day.

Mike came out of the gates, opening on an untapped Blood Crypt and a Mogg Fanatic. Gadiel echoed with a Birds of Paradise, but the Bird was not long for the world as the Mogg Fanatic attacked, then sacrificed itself for the greater cause of taking out the 0/1.

After three turns Hron had a Tarmogoyf attacking as a 2/3 with Fanatic and Char in his graveyard, while Gadiel had no creatures and the Bird and an Ohran Viper in his graveyard. He did, however, have an untapped Treetop Village within his lands, but he would be hard pressed to activate it without countermagic for fear of losing his mana source to one of Hron's plentiful burn spells.

A second 'Goyf entered play for Mike, followed by a Rain of Gore to stop any potential Hierarch + Blink shenanigans from Gadiel. All Gadiel could do was try to answer with Venser and an attack on the tapped out Hron before adding a second Ohran Viper. The Viper seemed to be a strong call for this weekend, able to kill Tarmogoyfs simply by standing in front of them, but is no doubt slightly weaker thanks to Tenth Edition's inclusion of Incinerate.

The life totals stood 16-8 in favor of Mike Hron and Szleifer was backpedaling. His Venser crashed in before a third Ohran Viper joined his side of the table. He passed the turn, and Hron went into the tank. After a few moments of thinking, he asked Szleifer how many cards he had in hand. Szleifer responded with "Three" but that didn't seem to play into Mike's plans as he continued to think. Eventually he attacked with his 3/4 'Goyf, which traded with the Viper, before adding a second copy of the Future Sight favorite to the board.

Szleifer was now firmly on the defensive and had no choice but to keep his Venser back with a Wall of Roots and an untapped Treetop Village. Hron had a Cryoclasm for Gadiel's Island, sending him to nearly dead, then followed up with a Char. The players moved to Game 3.

Again neither player had anything to say during sideboarding, and they quickly moved on to the final game of the match.

Gadiel led with a Horizon Canopy into Birds of Paradise while Hron had only a tapped Stomping Ground. Ohran Viper hit the board for Szleifer but, not to be outdone, Hron added a copy of Dark Confidant to the board, content to match Gadiel by drawing additional cards each turn. Ironically Bob Maher, the player depicted on the card, is a Madison native like Hron, and they have worked together on events in the past.

Hron had a Char, flipped from Bob, for a Szleifer Hierarch before coming in with Bob. At the end of four turns it was 17-10 Szleifer who had 2 Vipers, a Birds of Paradise, and double Horizon Canopy amongst his four lands while Hron had just Dark Confidant with his four lands, two of which were Gemstone Mines.

Confidant continued flipping action for Hron, but at the cost of his dwindling life total. He needed answers for Szleifer's Snakes, but he was going to be hard pressed to fight it through Momentary Blinks AND countermagic. He managed to get a Char to stick on one of the Vipers, but it left him at just 4 life and without one of his Gemstone Mines. A suspended Rift Bolt threatened to take out the final 1/3.

This time it was Szleifer's turn to go into the tank. After thinking for a few minutes, he finally added Glare of Subdual to the board then used a Wall of Roots to tap Mike's Dark Confidant before swinging in with his Ohran Viper. That left Hron at just 3 life, capable of dying to many of his own cards if revealed to Bob. His Rift Bolt on Ohran Viper met a Momentary Blink, though it looked like Hron had contemplated acing his own Confidant before declaring his target. Fortunately for him the 2/1 finally revealed a land and Hron had a Giant Solifuge for his turn, binning his last Gemstone Mine. 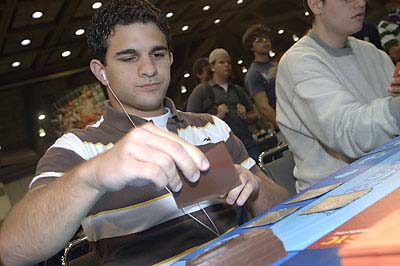 The life totals were 14-3 in favor of Szleifer, whose board position was Glare, Viper, Wall of Roots with one counter, and Birds of Paradise. Mike, on the other hand, had Dark Confidant and Solifuge. Unable to gain a foothold, he was forced to simply play a land and pass the turn to Gadiel.

Gadiel had a Riftwing Cloudskate for Mike's Stomping Ground, putting Hron at three lands in play, then passed the turn, seemingly content to sit behind his Glare and let Dark Confidant slowly do Mike in. Mike wasn't going down without a fight, using a Cryoclasm on a Breeding Pool. Gadiel sacrificed a Horizon Canopy in response, but let the spell resolve. Mike had nothing else, and Gadiel's Riftwing Cloudskate put Hron on a precarious 1 life, a position exacerbated by the Dark Confidant on his side of the board.

It looked like Hron's years of work with Maher were paying off as he flipped a third land in a row to survive one more turn, but Szleifer had added Loxodon Hierarch and Hron was faced with needing blockers that couldn't be targeted or losing to Glare. He didn't have them, and when Gadiel demonstrated he wasn't going to forget to tap all the creatures except Solifuge, Mike extended the hand.

After the game the two players finally took the time to speak to one another, asking each other a few questions about the games. Mike moved to leave from the table and Gadiel gave him a congenial "Good luck."