Round 1: Anton Jonsson vs. Tomi Walamies

"I'd just like to send greetings to all the Pattern of Rebirth players around the world." – Tomi Walamies

"So who am I sending greetings to? The boring people?" – Anton Jonsson 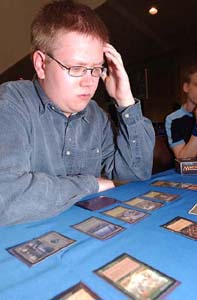 To be fair, almost anyone (with the exception of Eivind "Fashion Mogul" Nitter) would play the dullard opposite Tomi Walamies. The Finn is loved the Tour over for his sharp dressing and killer tournament reports. He's also fresh of a finals appearance at Venice, the finish that kept him on the Tour. Jonsson is no slouch either, with a recent Grand Prix title and many top finishes to his name. This all-Punisher matchup was just one of many teammate-on-teammate battles taking place in the first round of the masters. True to his word, Walamies was with Rector-Pattern. Jonsson was with the dull-but-efficient Psychatog.

The first action of the first game was a turn-two Cabal Therapy from Walamies. He named Counterspell, and saw a hand of Fact or Fiction, Psychatog, Intuition, Accumulated Knowledge and lands. He played another Therapy and stripped the Intuition. Jonsson dropped another land and passed it back. Walamies played Wall of Blossoms and ended his turn. Jonsson played his 'Tog. Walamies had no fourth land and no play, so he just gave it back to Jonsson. He dropped his fourth land.

A Llanowar Wastes from Walamies gave him reason to think. He tapped four for Academy Rector. Jonsson floated two and played Gush. Force Spike came off the top of his deck to stop the Rector. Burning for one was a small price. The next turn Walamies resolved a Ghoul. Jonsson hit for one and passed it back. Cabal Therapy stripped the Fact or Fiction, leaving behind two more 'Togs, a Counterspell and a Spike. Jonsson swung in and Walamies blocked with the Ghoul, letting it die. He untapped, floated white mana, then forced out the Counterspell with the flashed-back Therapy. That let him resolve Parallax Wave.

Over the next few turns, Jonsson would add Psychatogs to the board. Walamies let the second 'Tog hit once, then again, making an Elder and Phyrexian Ghoul. The next time the 'Tog charged, Walamies double-blocked, and then got rid of it with Parallax Wave after Jonsson ate some cards to finish them both. The Wave faded its last counter. Walamies tried to put a Pattern on his Elder, but Jonsson had the Smother. Then it was gone, and Jonsson had three 'Tog's again. Walamies dropped another Pattern on his Ghoul and tried to bluff something. Jonsson swung in regardless, and Gushed into lethal damage. Walamies scooped.

Walamies first-turn Cabal Therapy for Counterspell hit, leaving behind Accumulated Knowledge, Mana Leak, Smother and lands. Wall of Blossoms followed and then Nantuko Husk, which fell to the Smother. Opposite Jonsson's three land he flashed back the Therapy, stripping the Mana Leak, but seeing Brainstorm and Cunning Wish. He went for the Rector. Brainstorm turned up no solutions, and it resolved. On Walamies's next turn he showed the Cabal Therapy that would let him sacrifice the Rector. He got rid of the Cunning Wish, and then flashed it back, fetching Future Sight. Jonsson played Fact or Fiction in response, and was offered Counterspell and two lands or Deep Analysis and Smother. He took the smaller pile. The Therapy took the Counterspell still in his hand.

Now Walamies was rolling with the Sight. His first turn he only played a land and an Elf before turning up Symbiotic Wurm. Jonsson Duressed, taking Pattern and leaving behind two Rectors, and made a Psychatog. Walamies came back with an avalanche of lands, Elders, and Birds of Paradise. Jonsson failed to draw action and Walamies Rectored out Choke to lock him down. Then he Patterned out Visara, and Jonsson couldn't kill him that turn.

Jonsson's draw suffered from a shortage of lands early, forcing him to Brainstorm and Polluted Delta into more. Walamies was drawing exactly the cards he needed. Duress and Cabal Therapy picked apart Jonsson's hand, with Wall of Blossoms and Birds of Paradise providing ready flashback opportunities. The last one forced Jonsson to Cunning Wish for Mystical Tutor and set up an Intuition. He drew four on his next turn thanks to the Knowledge already in his graveyard.

Unfortunately for him, Walamies had the Rector to go get his Future Sight. Jonsson drew an Upheaval, but Duress came right off the top for Walamies to prevent that eventuality. All the while Walamies was churning through his deck thanks to the Sight. Jonsson drew more lands, and Walamies soon overwhelmed him.