"Congratulations! When I was little, I always watched your top 8 matches," smiled Christian Valenti, as his opponent arrived for his first match of the day.

Kenji Tsumura, the little master, sat down for round 1 of his first Pro Tour since Pro Tour Amsterdam in 2010. He'd already had quite a morning, having been inducted into the Pro Tour Hall of Fame alongside countryman Masashi Oiso, Patrick Chapin, and Paulo Vitor Damo da Rosa. 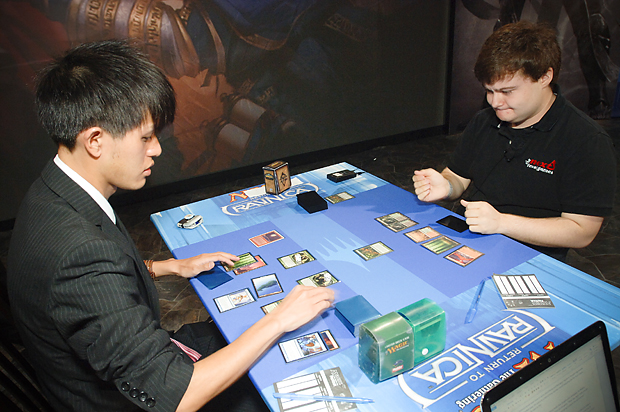 Kenji Tsumera, who is leaving this weekend as a member of the Pro Tour Hall of Fame, would also like to leave round 1 with a 1-0 record. American pro Christian Valenti is looking to stop him.

Resplendent in a tailored suit which was normally rolled out just for weddings, Tsumura seemed in his element, shuffling up with an intense look on his face. He nodded as his opponent, Christian Valenti chose to took a mulligan on the play. The American pro would need a good finish at this Pro Tour to stay qualified moving forward, as his invite to Pro Tour Return to Ravnica was the last vestige of his status from the Pro Players Club. Valenti seemed excited to play against one of those players who he had watched before he himself had ever made it to a Pro Tour, but could certainly have had an easier opponent to start his day with.

Tsumura would never have to worry about being qualified again, thanks to the gold ring already safely tucked away. His status as a Hall of Fame member would mean that the Pro Tour's doors would always be open to him, unless perhaps he achieved his next Magic dream; to get a job working for Wizards of the Coast themselves, helping to work on the game he loves.

With the very first play of the game, Valenti made clear his game plan. A Valakut, the Molten Pinnacle on turn one showed how he intended to win the game. "There was never really a doubt. Anyone who knows anything about me knew what I was going to play in this tournament."

From here, in some respects, the entire game plan for his deck would be known to Tsumura. The powerful land was Valenti's path to victory. With enough Mountains to support it, it would be able to burn the Japanese player from 20 to 0, potentially aided by various ways of getting many lands into play fast.

A second-turn Prismatic Omen from Valenti met a Spell Pierce. Tsumura wasn't about to make it easy for his opponent. A Tarmogoyf followed for Tsumura, meaning that there was a window for Valenti to succeed with his second Prismatic Omen, ensuring that his lands would have all basic land types. From here, Valenti's Valakut, the Molten Pinnacle would be far more productive. 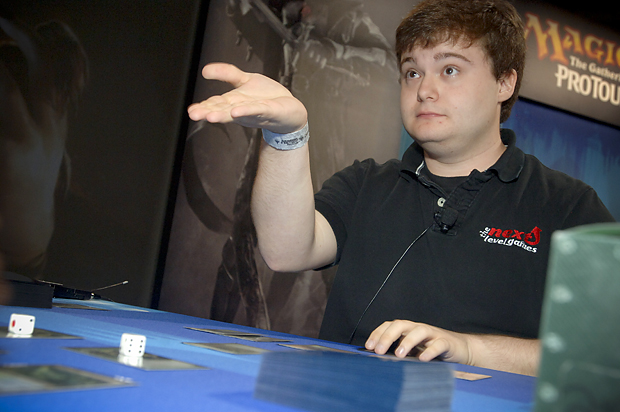 Tsumura had other ideas. He cast a Blood Moon, which undid much of Valenti's work, and left his mana base decimated. With Prismatic Omen and Blood Moon out, the last enchantment played would "win", overwriting the same layer, such that Valenti was left to tapping his lands for only red mana. Critically, that Valakut, the Molten Pinnacle would no longer be able to trigger. A second Tarmogoyf soon compounded Valenti's woes. In blisteringly fast fashion, Tsumura had taken his first game of the tournament, with straightforward beatdown and just the right disruption to stop Valenti's best efforts to win the game.

Undeterred by how it had worked out in game 1, Valenti's start was eerily similar for the second game to the first, though without any awkward mulligans. A turn one Valakut, the Molten Pinnacle was followed up by a turn two Prismatic Omen. Explore was stopped by a Spell Snare from Kenji, who was keen to not find himself too far behind on mana, having started the game on the draw, especially considering that Valakut, the Molten Pinnacle really wants six or more lands in play to start triggering.

The Valakut, the Molten Pinnacle game plan is one new to Modern, though certainly not to Magic in general. It is only with this event that the powerful land is unbanned in the format, and it remains to be seen whether it will prove a dominant strategy. Valenti played a Search for Tomorrow to up that land count, and revealed another one when Kenji played an end-of-turn Vendilion Clique, along with a land and Guttural Response.

Tsumura had his damage source on the board, and proceeded to go for the throat with a Blood Moon. As in the previous game, Blood Moon stopped his Valakut, the Molten Pinnacle from being a threat, affording Kenji the time to start attacking.

The attacks from Tsumura took a different turn in game 2, as Vendilion Clique was joined by Consecrated Sphinx, a powerful flyer that would give Tsumura not just a sizeable airborne attacker, but also a source of huge amounts of cards.

Valenti, outmatched, would have to start his tournament having a loss, as there was little he could do to stop the formidable air force without his Valakut, the Molten Pinnacle doing its thing. 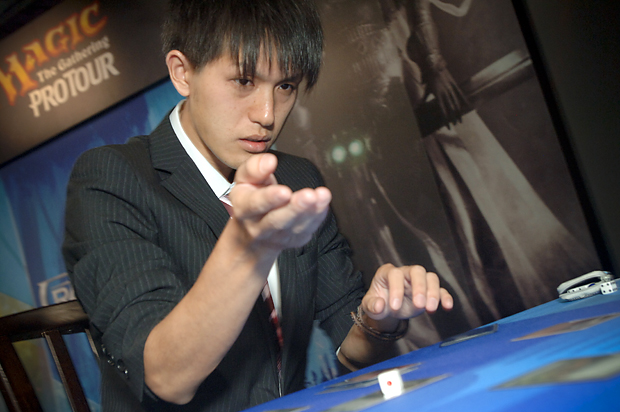 Blood Moon makes gives Valenti more Mountains than he really wants, as Tsumera speeds through his first round with some brutal plays.

4 Valakut, the Molten Pinnacle 4 Scapeshift 1 Boseiju, Who Shelters All
75 Cards