Round 1: Battle of the Ages

Round 1 of the 2005 Magic World Championships, and fresh off the Hall of Fame induction ceremony, the air is heavy with tension and determination. Antonino De Rosa, this year's U.S. National Champion, found himself matched up against one of the five players just immortalized in this year's Hall of Fame, setting up a grudge match between Magic's past and present. Olle Råde, welcome back to the Pro Tour. 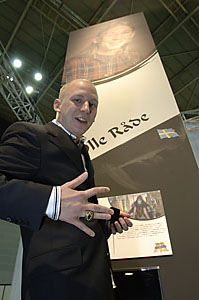 Olle Råde stands in front of his tower of honor.

Antonino is hoping to rely on his old standby Meloku-based control to put the old-timer in his place (this time splashing some black for creature removal). There was some question as to whether Olle would even be competing in the event, but we should have known he wouldn't be able to pass up on a format sporting his long-time favorite Savannah Lions, a card that has featured heavily in many of his best constructed finishes. For fans of the Pro Tour, it should come as little surprise that "the littlest Viking" is packing a Boros beatdown/burn package.

Antonino won the flip and choose to play first. For his first hand it was an easy choice, taking only a very short moment before he shipped it back for a shot at something better. As he shuffled a second time, De Rosa reminisced about seeing Olle compete years ago at Grand Prix-Atlanta, saying how much he'd wanted to do as well as Olle, and that he'd gotten chills during the Hall of Fame induction ceremony. The six-card hand was a keeper, and it was time to get things going.

Olle had the tempo draw to pressure his controlling opponent, playing Isamaru followed by Jitte. Antonino delayed the Jitte with Remand, and Olle showed a bit of his rustiness asking exactly what the card did.

Antonino: "Right. And I draw a card too!"

Turn three saw De Rosa take 2 to put a second Watery Grave into play untapped, then took a hit from Isamaru. Olle thought briefly but decided not to walk into the countermagic the American was threatening, and passed the turn. That's when his hound took its Last Gasp. 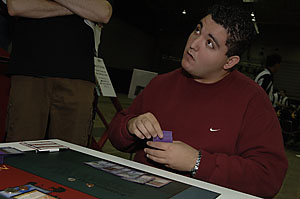 Things continued this way for quite some time, with Olle's little beaters running into a steady stream of counters and removal. Once it looked like Olle had run out of steam Antonino tried for a Meloku (which ran into a Char) followed by Keiga (which resolved but fell to a combination of burn and Jitte counters). Meloku No. 2 came down and Olle's Jitte didn't have enough counters yet to put the legend away. A hasty Skyknight Legionnaire came over Jitte in hand. It was gang-blocked by the legend and some tokens, but a Lightning Helix plus some Jitte work sent most of Antonino's team to the graveyard. The American was down to two cards, two spirit tokens, and no apparent answer to the Jitte. A couple turns later it was off to Game 2 with the Hall of Famer up 1-0.

Antonino laughed. "Jitte is so good."

"Sure is, it definitely won that game."

"Yup. But I think I misplayed as well."

For this one De Rosa again threw back his opening hand but managed to find a playable six-card set. During his second bout of shuffling he asked Olle if he'd be playing in the Pro Tour events again now that he's in the Hall of Fame. Olle smiled and said, "I'll definitely go to the ones in Europe!"

This time Olle didn't have a play for turn one, but he had a Leonin Skyhunter (which ran into a Last Gasp) followed by a Jitte (which resolved) but had nothing after that, laying land after and simply saying go. Antonino joked that his opponent must be playing red/white control now, and cruised to six mana to drop Keiga, still sporting a luxurious 20 life points.

The dragon fell to a couple burn spells on Olle's main phase, and once the dragon was safely in the 'yard the Swede added a Savannah Lions to the board. De Rosa answered with a Meloku that had two open mana to back it up, as well as a Disrupting Shoal (pitching Hinder) to stop the Char that tried to take it out. Savannah Lions tried to pick up the Jitte, but the American's final card turned out to be a Last Gasp. Olle was down to just a Jitte and a bunch of land. Antonino also had just one card in play in addition to a bunch of land, but once he untapped that card was more than enough to make his pile of land too much for the Swede to handle.

Getting to go first for the first time in the match, Olle had a keeper, but his opponent made a face as soon as he fanned out his first seven for this deciding game. "Man, three mulligans in a row. Strategic mulligans though. You know, the ones where you have all land or no land." 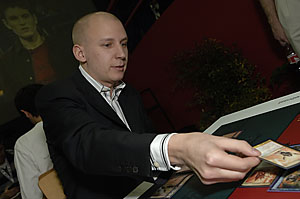 Ever the fashion plate, Olle shows off the latest in Magic business casual.

Olle had the fast opening this game, dropping a hound followed by Jitte. Antonino had no black mana, but his second land was a Quicksand. Olle equipped up the Hound and sent it in, and the Quicksand couldn't resist.

With Antonino tapped out and possessing just one Island, Olle played land No. 3 and hired a replacement hound. Antonino missed his next land drop and shrunk at least two inches as his slouch showed anything but confidence. He managed to find a second land to drop into play next turn but the damage had been done.

Out-creatured, out-mana'ed, and getting mashed by Jitte, his concession came only a couple turns later. A good sportsman even under such frustrating circumstances, De Rosa shook his hand and wished him luck. Unable to resist, I asked Olle if he'd ever failed to Top 8 a Worlds where Savannah Lions was legal. He thought about it a sec, grinned, and said, "I guess not."

For Olle, it was off to another interview about the Hall of Fame. For National Champion Antonino, it was time to dust off his bruises and get things on track for both himself and the US team he leads this week.