Wiegersma and Jeroen Remie are two of the Netherlands' most accomplished players. They test together, they won a team Pro Tour together, they've lived in a beach house on the North Shore of Oahu for the last month together preparing for this event. And now they have to face off in Round One wielding decks that are identical save three cards. 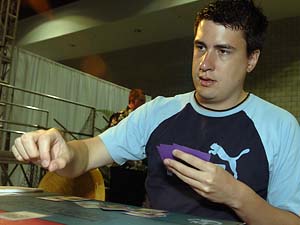 The Magic Hawaii House was home base for 13 players from seven different countries for the previous several weeks. Their testing led them (well, most of them anyway) to the deck Jelger and Jeroen are wielding Friday - a black/white control deck fueled by Phyrexian Arena and splashing green for Loxodon Hierarch, Putrefy, and the full complement of Vitu-Ghazis. Besides the Saprolings and Elephants, the deck can win with Ink-Eyes or Angel of Despair; it eschews the more popular black/white finishers - Debtors' Knell, Kokusho, and Yosei.

In Game 1, Jeroen's mulliganed an opening hand that contained two land, an Orzhov Signet, and plenty of decent cards, later explaining his decision and revealing his depth of understanding of the mirror match. "I had no Arena and no way to stop an Arena if he had one. He'd get Arena advantage and then I'd lose."

Five land and a Castigate proved to be a good hand for Jeroen, as the Castigate took - what else? - Jelger's Arena. Jeroen's Shizo took out Jelger's, leaving Jelger a mana short from playing the Hierarch in his hand.

Jeroen started drawing spells, and Jelger eventually drew lands and the game was under way. Every threat was answered in turn-three different City-Trees were enchanted with Faith's Fetters, Loxodon Hierarchs were Putrefied, and Jelger's Angel of Despair was Wrathed away. Both players' life totals hovered above 20 well into the midgame.

And then Jeroen peeled a Phyrexian Arena and the tide turned. Jelger managed to sneak an Ink-Eyes into play disguised as an attacking Saproling and stole Jeroen's dead Hierarch, but Jeroen's extra card drawing quickly swung things back in his favor.
Wrath took out the fatties, Fetters solved Jelger's remaining Tree, and Orzhov Basilica let Jeroen bounce his own Fettered Tree. A few turns later, Jeroen was the one turning Saprolings into Rat Ninjas. When Jelger's Angel of Despair appeared across the table suddenly, he scooped. 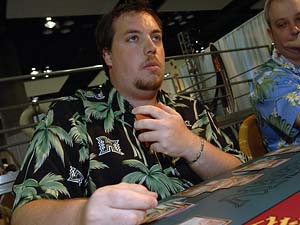 Between games, the two Dutch explained their deck choice, claiming it doesn't have many bad matchups at all, and can handle a wide spectrum of opponents, from ultra-fast Zoo decks to plodding Jushi control. "The blue-red Howling Mine deck can be a nightmare," added Remie. "So can Ghazi-Glare." The latter deck may no longer be a player in this format, but the former is definitely present this weekend.

The players sideboarded in more ways to keep Arena off the table, including Distress and Naturalize. But again, the game was decided by Jeroen getting an Arena to stick. He had drawn two in his opening hand-one of which was Castigated-but he Distressed Jelger for Naturalize before playing the second.

After that, the game was academic. Jeroen eventually activated a Tree, turned the token into Ink-Eyes, and stole an Angel he had Distressed previously. Game over.

Jelger was miffed that his tournament had to begin in this way. "The deck is awesome, but the mirror match is so random. There are essentially no decisions; you just try to get Arena."

Jeroen was consoling, and Jelger left confident that his deck would serve him well against other opponents for the rest of the day.