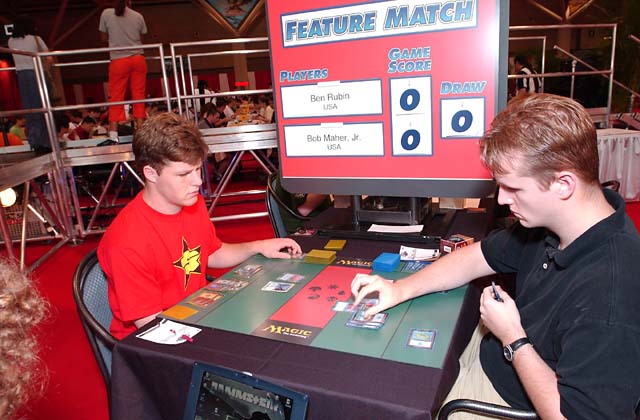 The light of the early morning kept the pregame chatter to a minimum. Both players shuffled their decks and shook off the cobwebs. Rubin related a short anecdote about how he had to crack packs to find two Sleight of Hands to round out his deck. It wasn't A-list material, but considering the hour, it was fabulous.

It was nonstop excitement as Rubin and Maher dropped a flurry of islands. Maher broke the monotony with a Yavimaya Coast, a spicy addition by anyone's standards.

Rubin's first play was an unconventional Stinging Barrier on Turn 4. Maher Counterspelled. He untapped, and failed to play a fourth land, passing back to Rubin. Rubin untapped and went for a Spontaneous Generation, but Maher had a second Counterspell ready.

With Rubin all but tapped out, Maher went for Static Orb. It resolved. Rubin untapped, played a land, and made a Stinging Barrier. Maher struggled to find lands to keep up with Rubin, with Accumulated Knowledge finding him his fourth. Rubin was way ahead with eight.

Rubin looked to take control with Opposition, leaving two blue up. Maher Countered, and Rubin wasted no time Countering back. Maher paused, and picked up two islands for Gush. After it resolved, he pitched Static Orb and island to Foil. Rubin's Opposition went to the graveyard. 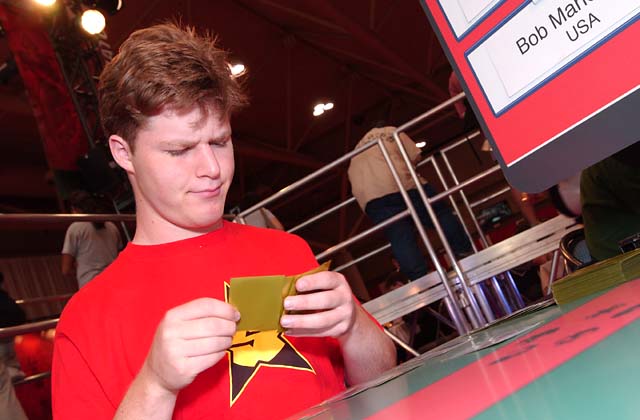 With two more Accumulated Knowledges, Maher untapped into a hand of ten cards. He tapped out for Opposition, and Rubin caught him unawares with Daze. Maher put it in the graveyard rather than fight over it. He then played a very unhappy island, and handed it over to Rubin.

Rubin played a second Stinging Barrier and passed the turn back. Maher dropped Saproling Cluster, holding seven cards to Rubin's three. After two turns of slow untapping, Rubin made a pair of Saprolings.

He attacked on his turn. Maher made two tokens of his own. Rubin shot one down with a Barrier. Maher made a replacement. Rubin shot it as well. With most of Rubin's resources thus expended, Maher let the attackers through.

Maher didn't have the Opposition to run away with the game, and had to dig deeper in his deck with Fact or Fiction during Rubin's end step. He scored Accumulated Knowledge #4 and a second Cluster over three lands.

Between his shrunken hand size and expended resources, Rubin couldn't get any action going. He watched as Maher Accumulated four cards. He untapped and played Spontaneous Generation, creating a wall of seven Saprolings.

Rubin went for the throat with Opposition. Maher Thwarted, and Rubin responded in kind, both picking up a trio of islands. Maher overbid with Foil, pitching island and Static Orb. Rubin frowned, shrugged his shoulders, and sent the enchantment packing.

He untapped, and played a one-mana Gush. It didn't turn up the dividends he expected. He dropped Static Orb.

Maher's face was an unconcerned mask as he tapped out for Coat of Arms. Rubin counted the Saprolings twice, then scooped.

Game 2 was as much of a cavalcade of fun as the first. Rubin opened with two Sleight of Hands to Maher's one. Then it was land until Sunday. The first move was Rubin's, tapping out for Gush at the end of Maher's fifth turn. Maher double-checked, asking "That's a 16oz Gush?".

Rubin untapped and went for a Spontaneous Generation for six. It was an epic counter war. Counterspells on both sides, then Maher Gushes into Gainsay. Rubin picked up three islands for Thwart, and Maher came back with Foil, pitching Rushing River and island. 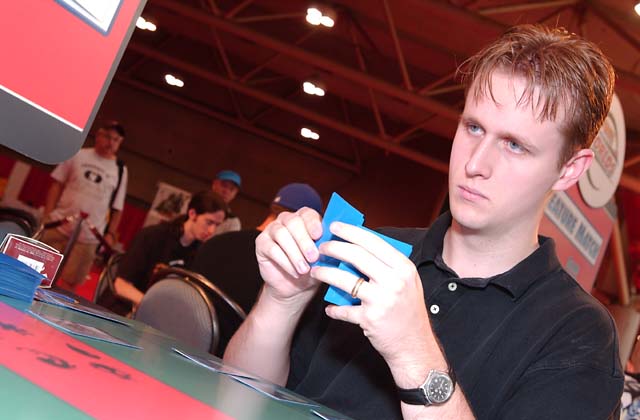 Having just stymied Rubin's ploy, Maher made a Generation of his own, this time for four. It resolved, but Rubin came back with a two-mana Gush that gave him nine tokens from his second Generation. His newfound army marched over Maher's four men, and five still stood to attack again.

Maher took the beats, desperately looking for action. He protected a Fact or Fiction from Rubin's Counterspell with Thwart, and received two Teferi's Responses, Counterspell and Sleight of Hand over a lone Foil. He tapped out for second Generation of his own. Rubin laid Disrupt on the table.

From there on in, it was academic. At four, Maher searched with Gush and Sleight of Hand, trying for Unnatural Selection. Rubin showed him the counterspell to take the game.

While shuffling between rounds, Feature Match judge Paul Barclay noticed some marks on the backs of Rubin's cards. Closer inspection revealed four clearly marked cards, three with the same pattern. The three patterned cards all turned out to be Stinging Barriers, and so Rubin was awarded a match loss for marked sleeves with a pattern.

As the ruling was laid down, Rubin realized the source of the pattern. The Stinging Barriers were the last cards he put in his deck as he constructed it this morning, and he had kept his unused sleeves in his pocket. There, they had acquired the dented pattern. He took his loss graciously, commenting that it was his own fault for not paying closer attention. Maher wished Rubin better luck in the coming rounds.