Round 1: A Boros Beatdown

his is what happens at Pro Tours. As longtime teammates, friends, and two of the best Limited players in the world, few players in the room are as familiar with one another as ChannelFireball compatriots Martin Juza and No. 4 Ranked Player Ben Stark. They've tested together, traveled together, and naturally, drafted together.

And it certainly shows this round.

Both Juza and the Hall of Famer across the table have drafted aggressive red-white decks with quick, brutal beaters and a bevy of tricks. The hitch is that only one player is actually happy with his deck. More on that in a moment.

Juza needs a result this weekend a bit more than Stark does, having just fallen off the Top 25 rankings in the past week thanks to, by his standards, a weak season. Juza is also a Hall of Fame candidate that could use another strong Pro Tour to get back in the mind of voters this year and try to regain his footing in the race for the World Championship. In fact, if Juza didn't do well this tournament, he was in danger of missing Platinum entirely this year.

Stark, meanwhile, already has the Hall of Fame, a (so far) strong season, and the inside track to the season's most prestigious tournament. He was doing just fine. 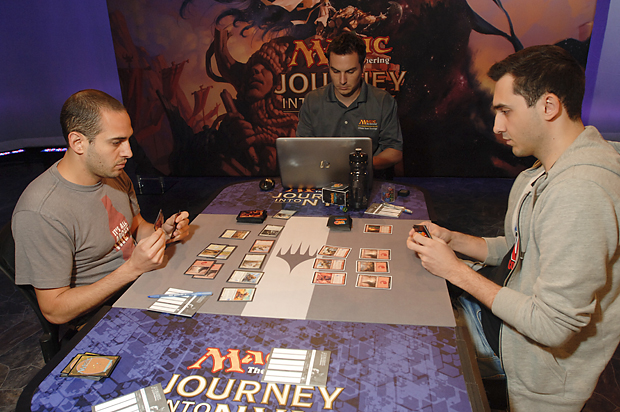 No. 4 Ranked Player Ben Stark and Martin Juza are ready for a first-round match between teammates.

Except, as it turns out, with his deck.

"It's not good," Stark said, never one to pull punches on even his own decks. "I have no premium commons. I'm in the colors I'm supposed to be in, but the packs just didn't break my way."

Stark said he was happy with the colors he landed in from his position at the table, but that he seemed to be getting the second tier of white-red cards. The reason, it turned out, was that Juza seemed to be snapping much of it up as soon as he got the chance.

"We've got a good one here," Juza said while shuffling through nearly 30 cards in the running to make his deck. "I've got to make a few cuts."

Juza came into the draft feeling red was under drafted, and quickly settled into the archetype after sniping a Harness by Force, a card he says is possibly the best card in the format after Silence the Believers. However, Juza prefers the red spell for one simple reason.

And if nothing else, his deck can certainly do that. An archetypical white-red deck, Juza can hit hard and fast with cheap creatures backed by some of the best tricks and auras. In fact, when I walked up to Juza, he was in the middle of deciding which of his strong tricks he was actually going to cut. In the end, he left about five playable cards in his sideboard.

His deck appeared strong, fast, and consistent, while Stark's mostly looked like a pile of random creatures with a decent curve and a few tricks.

Or at least that was the idea.

Juza came out fast – at least as fast as a pair of 1/1s were capable of allowing – but immediately had the breaks put on by a serious case of "not drawing any lands." Two Mountains can only take even a player of Juza's caliber so far.

Stark, meanwhile, didn't do anything special beyond laying a few creatures turn after turn and attacking. But that, it turned out, was more than enough. 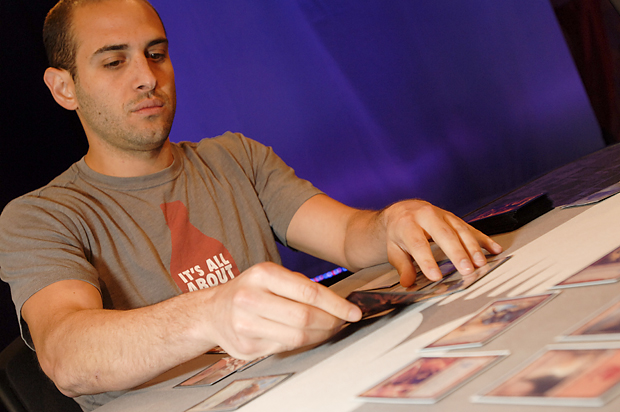 Hall of Famer Stark capitalizes on a slow start from his opponent and teammate.

You could see the frustration on Juza's face as his powerful deck was unable to muster any kind of attack or token resistance to Stark's motley crew. With just three Mountains to count on, Juza was forced to scrape and claw for every point of damage that didn't come from his Impetuous Sunchaser, which Stark otherwise ignored while attacking with various 1/1s, 1/2s, 2/2s and the odd 3/2 with nary a combat trick in sight.

With Stark at 9 and Juza at 10, Stark crashed in with his host of random creatures, dropping Juza to 3 before reloading with two more blockers to make it virtually impossible for Juza to break through.

But, just in case, Juza pointed a Fall of the Hammer at an Akroan Mastiff and considered his options. Running through multiple scenarios and various maths (yes, maths), Juza eventually came to the conclusion that he was just too far behind to survive the next turn.

Once again both players came out fast and hard in the second game, each attacking for 4 damage as early as turn three, curving out with aplomb. Juza sent in the beats with a Sigiled Skink displaying a Fearsome Temper while Stark continued assembling his rag-tag group with one, two, and three drops headlined by Akroan Hoplite leading the way. 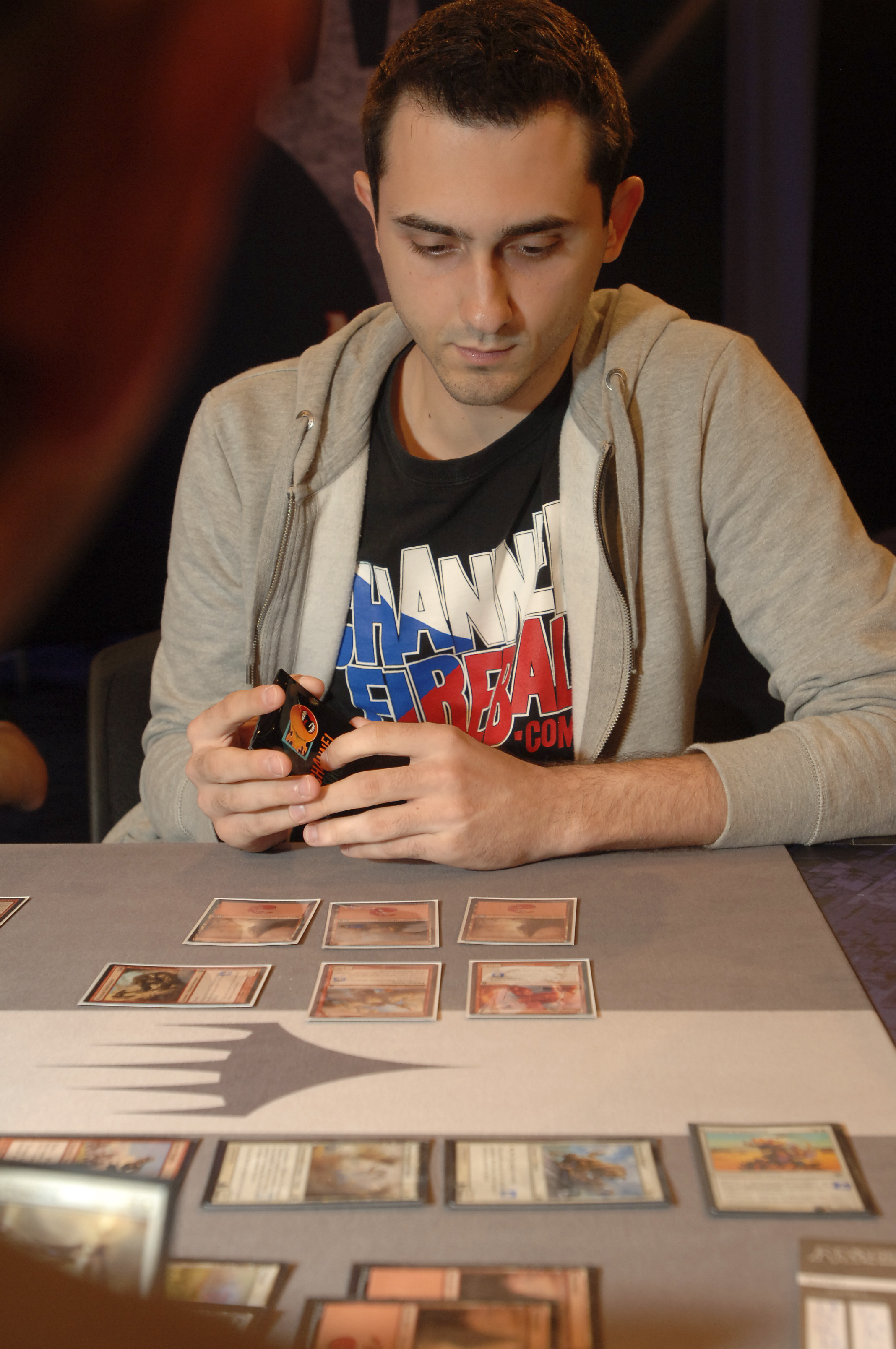 Juza needed his draws to improve if he wished to begin this Pro Tour with a good start.

Things started getting interesting on Stark's fourth turn, when Juza had to decide whether to put an Ill-Tempered Cyclops (all of Juza's creatures seemed to be pretty angry) in the way of the Akroan Hoplite. He opted not to block and took it in the chin to the tune of 9 damage, including a Mortal's Ardor that turned the race decidedly in Stark's favor.

"Three more tricks, don't forget that one," Stark said, tapping the top of his deck.

Stark didn't actually have three tricks, but he did have Phalanx Formation, which was like three tricks in one. So when Juza went to block and hope to trade off at least a few creatures for Stark's stuff, he was instead blown out when three blockers all fell to Stark's tightly molded Phalanx Formation. One more turn was all it took to get Juza to scoop up his cards.

"You just didn't see your good cards," Stark noted while reviewing Juza's deck after the match. "Your deck is much better than mine. My curve and tricks are fine, I just don't have any good cards."

Still, Juza lamented his fortune, especially at a tournament where he really needed to do well.

"I didn't even need my good cards. Just a third land so I could play some spells."

Stark knew his friend needed the pro points and need a strong result at this tournament, so he did what friends do. He offered some words of encouragement – Juza really did have a powerful deck beset by some poor luck this round – and did what Ben Stark does best: helped Juza look through his deck and see if there was anything he could do better.

Because this is exactly what friends do at Pro Tours, even after one of them bludgeons the other in a matter of minutes.