Round 1: Breakfast of Champions

round one of the Pro Tour, we have two former PT winners paired up in the very first round. Each won their trophy in Constructed, but while Antoine Ruel is a regular on the Tour, Justin Gary hasn't played since Pro Tour-Philadelphia. These days he contents himself with working in game design, and has been drawn back into the Pro Tour by the lure of the Hall of Fame, for which he will be eligible soon.

"I don't think we co-operated as well as I might have liked," remarked Justin dryly.

They had been sitting next to each other while drafting, and each had similar takes on the most powerful guilds to try to get into (Izzet and Simic). Meanwhile, they each passed up on some good Orzhov cards in pack two, and two Glimpse the Unthinkables in pack one. There would be some strong decks elsewhere on the table, and each had to hope that Orzhov wouldn't come back to haunt them.

Antoine led with a Veteran Armorer off a pair of Plains, while a turn-two Coiling Oracle from Gary found Bramble Elemental. Justin followed up with the "hat rack" (Vigean Hydropon), then another Coiled Oracle, that plopped a Forest into play. 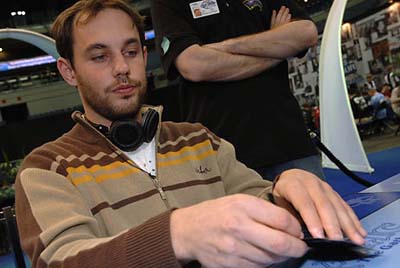 Antoine's draw seemed a little sub par, as he was forced to beat with just the Armorer, without any access to a second colour. Gary continued to bring the beats, in the form of a Bramble Elemental, who got a hat from the Hydropon, and proceeded to smash a little face.

Antoine finally saw an island, but had only a Surveilling Sprite to show from it, having to back pedal in order to stay remotely in the game. When Justin had a Fencer's Magemark to produce two 2/2s, Antoine simply scooped it up.

"That's one way to win," smirked Gary, as Antoine disconsolately looked to his sideboard.

Antoine's start was a little better in Game 2, as he played out an Armorer followed by a Mourning Thrull (who were considerably better at swinging in than the hat rack, which just sat there). It did give a Gruul Scrapper a counter though, and there was a full-fledged race going on all of a sudden.

Not to be outdone on the hasty men, Ruel went to the air with a Skyknight Legionnaire, knocking Gary down a little further. Justin had a Streetbreaker Wurm to try to stay ahead of the pace of this very quick game, but a Faith's Fetters put Antoine way ahead on tempo, with the little plinks from Mourning Thrull also helping. 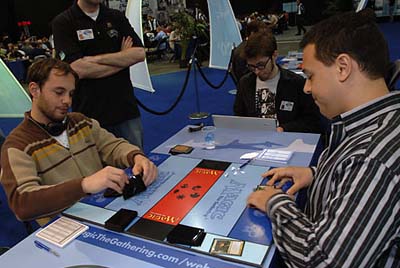 Justin made a Bramble Elemental, but was very much on the back foot, down to 5 to his opponent's 15, and without any defence in the air. The champion of Houston stared down the champion of Los Angeles and shook his head, mumbling an oath to himself. It turned out to be an oath of snake elf druids as he cast Coiled Oracle, getting another Bramble Elemental, and swung with both his first Brambles, and his Scrapper.
Wildsize kept his Scrapper about, and took Antoine to six. Ruel's swings back in the air with Legionnaire and Mourning Thrull made it 7 to 2 in Antoine's favour. What was slightly less positive was his board position, facing down an army of beaters. He made a 3/3 blocker, but it wasn't enough, as Gary showed Cytoshape to turn it into a 0/0 hat-rack, which promptly died. Antoine had a Withstand, but still dropped to negative digits.

"There's no better way to start the day than winning a round one feature match," laughed Gary, flashing a broad smile. Pro Tour wins … the breakfast of champions.