Round 1: Brian Davis vs. Michael Pustilnik 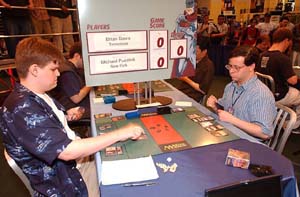 After three years on the Pro Tour, Brian Davis finally made it back to the Top 8 at Nice last month, placing in the Top 4. This establishes him as a true force on the Pro Tour, although others may still view his top finishes as a fluke. On the other hand, no one can debate the success of Mikey P. He is the only player to win a Grand Prix, Pro Tour and Masters. This weekend, he's looking to add a Nationals team membership to his resume. Pustilnik is running Trenches, while Davis has a rogue black/red control deck that uses Overmaster, Diabolic Tutor, and Recoup, among other unconventional cards.

Davis mulliganned to start. Pustilnik opened with Adarkar Wastes, and Davis cast first turn Duress, seeing Absorb, Fact or Fiction, Fire/Ice and lands. Fact or Fiction headed to the graveyard, and Pustilnik used Ice on Davis' upkeep to tap down the swamp. Tainted Peak and a second Duress followed. Pustilnik lost his Absorb, and sighed. He had nothing in his hand but lands, It looked like the perfect opportunity for Davis to take advantage of the situation, but he did not cast anything for the next few turns. Eventually he played Overmaster, which resolved after Pustilnik read it. He then played Recoup, casting Duress out of the graveyard. Pustilnik had Prophetic Bolt, Counterspell, Repulse and a land in hand, and lost the Bolt. Recoup was flashbacked, and the other Duress was played out of the graveyard, but was Counterspelled. Thanks to a bad draw, and the power of Recoup, Pustilnik was now in a position that was very hard to get out of.

Another Recoup was played to recast Overmaster, which was followed by Millstone. Persecute was cast on the following turn on blue, and Pustilnik laughed a bit and said "Fine! You get a Repulse," He had only a land in hand. Engineered Plague was cast on the next turn, but Pustilnik had drawn an Absorb off the top. Davis commented, "How lucky! I hate you so much!" A Haunting Echoes on the next turn resolved, and Pustilnik conceded. 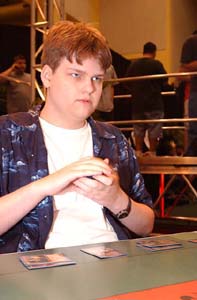 Pustilnik had a look of confusion on his face as he sideboarded. Obviously, Davis' unconventional deck made the decisions much harder. Davis noted this, and poured a pinch of salt into the wound. "Like those Recoups? I Duressed him four times with two Duresses!"

Pustilnik started off the game with a turn two Aegis of Honor.

Duress revealed Syncopate, Aura Blast, Rakavolver, Absorb and a Mountain. Absorb headed to the graveyard. An Addle was Counterspelled on the next turn. A few turns later, Pustilnik tapped out for a blue kicked Rakavolver, but Davis cast Diabolic Tutor and Innocent Blood. Recoup targeted Addle, but Overmaster was cast first. It was Syncopated, leaving Addle free to take away Aura Blast. The other card in Pustilnik's hand was Smash, causing Davis to comment "What the? I hope you get to cast it so you can go 'Smash your face!'" Davis tried to cast Haunting Echoes, but Pustilnik had topdecked a Couterspell. Davis then brought out Disrupting Scepter, and Mark Rosewater observed, "Your deck is very old school." Pustilnik promptly Smashed the Scepter, adding "Smash your face!" which made Davis content. "I did that just for you Mike. I wanted to hear you say that." 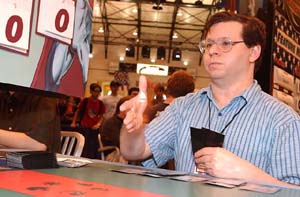 Fact or Fiction was then split into Fire/Ice, Coastal Tower, Counterspell and Fact or Fiction, Absorb. Pustilnik took the two card pile. Overmaster was Absorbed, and Davis tapped out for Haunting Echoes. Pustilnik triumphantly played Disrupt, getting a cheer out of fellow New Yorker Zev Gurwitz. Addle made sure the coast was clear, and Davis played Diabolic Tutor. Pustilnik Aura Blasted away his now obviously useless Aegis to draw a card. Recoup targeted Haunting Echoes and it resolved. Pustilnik hoped "Maybe you'll thin out my non-Trenches cards." Prophetic Bolt went to the dome, and sure enough, Pustilnik dug into a Trenches and played it. Davis had Persecute on white, taking away Wrath of God, which was Pustilnik's only card. Diabolic Tutor was played, and Davis had three lands untapped. Pustilnik knew what was coming, as Davis brought out Engineered Plague. Pustilnik then conceded.

"I shouldn't have played the Scepter. It was the only artifact I left in my deck. I just wanted you to cast Smash, and I almost lost the game because of it."