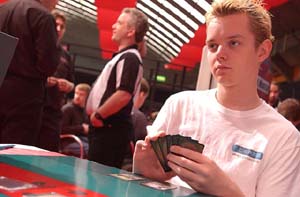 Jon Finkel might be getting all the press, but his partner in crime, Steve OMS, is in the same proverbial boat. Both need 3 Pro Tour points – a top 128 finish – to qualify for Worlds. Steve OMS has been to every PT except for the first three World Championships, and he has no intention of missing any more in the near future.

His first round opponent is Brian Hegstad, formerly of Team ABU, but now sponsored by ccghouse.com. Apparently his talent is in high demand.

Hegstad, playing black/white, won the roll but opted to draw first. He drew first blood with a Frightcrawler, but was stuck at two Swamps, whereas SteveO, playing black/green, was developing nicely with a turn-three Krosan Restorer accelerating him to Nantuko Calmer and Diligent Farmhand on turn 4. Hegstad had to discard an Auramancer on his third turn, sighing, "It starts."

SteveO added a Squirrel Nest to his side, which looked to combine with the Restorer to create many squirrels. But Hegstad, still stuck at two land, played a three point Sickening Dreams, kill all the creatures on the board.

Steve opted to bring in is Zoologist for his Leaf Dancer, valuing potential card advantage over size.

Hegstad got a four-land hand to start the second game, so things looked to be a little fairer. He answered SteveO's Organ Grinder with a pro black Pilgrim of Virtue, and had a Second Thoughts for the Seton's Desired Krosan Constrictor that was threatening him.

Hegstad then went on the offensive with Grotesque Hybrid and Dusk Imp. SteveO then cast Last Rites for two, but couldn't make Hegstad discard the problematic Strength of Isolation because of its madness ability, choosing Zombie Assassin and Sickening Dreams instead. Hegstad discarded the Strength to his Hybrid and madnessed it onto his Imp, then attacked for six more in the air. Steve never drew an answer for the fliers, and the match evened at 1. 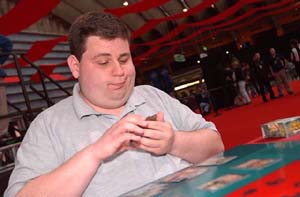 SteveO opted to draw, and Hegstad started off with a turn two Mesmeric Fiend, getting to choose from Narcissism, Morbid Hunger, Zombie Assassin, Muscle Burst, and Krosan Avenger. He chose the Avenger, hoping to prevent Steve from getting off to a fast start. It worked; Hegstad had deployed a Famished Ghoul, a Pilgrim, and an Auramancer before Steve got out his Assassin.

Hegstad cast Tainted Pact and bypassed a Swamp in favor of Patriarch's Desire, which spelled doom for the Assassin.

At six mana, Steve made the desperation play of Morbid Hunger on the Auramancer, even though Hegstad had mana up for his Pilgrim. Predictably, Hegstad saved the Wizard, but SteveO still gained the three life and with it, one more turn.

That turn ended up not mattering. The whole game was determined by Hegstad making the correct pick with the Fiend, opting for the less-powerful Avenger instead of the high-impact Morbid Hunger or Narcissism. All of SteveO's tempo was lost right there; he never drew another three-mana creature, and was overrun.