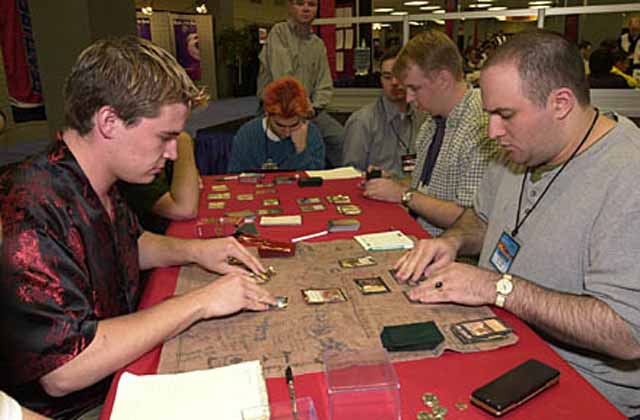 Potato Nation surprised everyone by giving Mike Turian a deck without any forests in it. Gary Wise got to play with the magical green cards, along with a reasonable dose of black removal. He took on Brian Kibler, who ran a fairly standard blue/white in Jumble's "B" seat.

Kibler got off to a good start in game 1, playing out Rishadan Airship and then when Wise tried to block and kill it with Misshapen Fiend, Kibler enchanted it with Mageta's Boon, creating a 4/2 flier. Wise promptly drew Snuff Out off the top of his deck, used it to destroy the Airship, and commented out loud "I got lucky there." Wise then played Scandalmonger, but Kibler just had a bunch of land in his hand. Meanwhile Kibler used Wise's Monger to knock Vicious Hunger and Sever Soul out of Gary's hand. Wise did have Belbe's Armor in play, though, and it prevented Kibler from ever building up a useful air attack. Meanwhile, Scandalmonger is also a 3/3 and Wise kept attacking with it until Kibler was dead.

About the time Wise and Kibler got ready for game 2, Turian drew his Two-Headed Dragon and finished off a 2-0 match win against Terry Tsang, thus taking Potato Nation to a 1-0 lead. (Turian is now 10-0-2 in his own match during team Pro Tours.) Potato's third, Scott Johns, was also up a game in his own match. Kibler once again had some early flying beatdown, but Wise once again had a Belbe's Armor. Kibler played Stinging Barrier, which would have been amazing versus Wise's Plague Witch, Misshapen Fiend, and Agent of Shauku, but Wise had one of his creature removal spells in hand - it was Snuff Out again. Kibler was thus reduced to stabilizing the board, but Wise had the answer yet again. Intimidation allowed Wise to attack unfettered and he won two quick turns later.