Round 1: Brian Kibler vs. Matt Vienneau 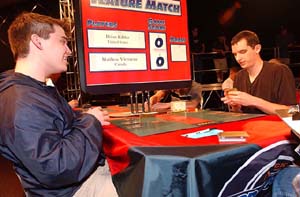 Brian Kibler, champion of Dragons everywhere, arrived first at the feature match area. He commented that in his opinion, the worst three-color combinations in this format were R/B, R/U, and G/W; and that his first opponent Matt Vienneau had drafted Green/White. Just about then, Matt sat down for the match, and I inquired about the power level of the draft at their table. Both players agreed the card pool was above average, with the most fearsome deck at the table containing 2 Beast Attacks, 2 Shower of Coals, Overrun, and Squirrel Nest. Kibler further added, "there were some weak decks at the table", with Vienneau responding, "I'm not unhappy to be playing Mr. Kibler round 1."

Matt presented a set of four dice, two of which were positive numbers and the other two of which were negative numbers. He proceeded to roll a negative two, while Kibler rolled a positive number, and chose to play first. Neither player took a mulligan, and both players started the game slowly, establishing their colors (Brian with Islands and Swamps, Matt with Forests and Plains). On turn three, Brian summoned a creature that is quickly proving to be the most popular of the weekend, Psychatog (or as he referred to it, "Wilder Mongrel").

Matt kidded Brian ("so what is it now, 6/7? 9/10?"), and accelerated his own mana on turn three with a freshly cast Deep Reconnaissance. This play revealed a third color in Matt's deck, with a Mountain joining the Forests and Plains (with Rith, the Awakener being almost synonymous with Kibler's name at this point, one must always reflect when his opponent plays the colors of Red, Green, and White). Brian attacked, and added a Famished Ghoul to his side of the board. On his next turn, Matt simply flashed his mana searcher back, and played a Forest, bringing his land count to six against Kibler's four. 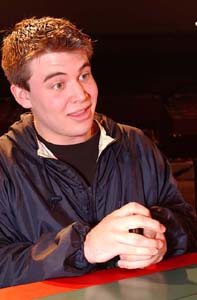 The game's atmosphere changed the very next turn when Brian cast Peek, revealing Kirtar's Wrath in Matt's hand. Suddenly it became clear why Vienneau built up his lands instead of casting one of the creatures in his hand; he was hoping to gain card advantage by clearing the board of his opponent's creatures. In fact, his play the very next turn was to cast the Wrath. Kibler cast a 2nd Peek, and knocked on his deck for good luck. Fortunes smiled on him, as he drew a Syncopate, allowing him to preserve his board position. A Frightcrawler and Childhood Horror later, the game was sealed.

Between games, the two had a discussion about their previous successes. Both conquered the Grand Prix circuit, with Matt's two wins in Dallas and Detroit outnumbering Kibler's win in Toronto. However, Kibler seemed to feel his win was sweeter, since he "invaded the country and smashed everyone" (referring to Matt's native Canada).

While the two competitors shuffled their decks, none other than feature match maven Mark Rosewater came over to watch the match. Mark noticed that both players sleeved in gold, though Matt's were clear and Brian's were opaque. Matt joked that "Kibler has something to hide." to which Brian quipped, "Matt likes to bear it all."

Matt made the first play of the game, summoning a Werebear on the second turn. A Peek from Kibler revealed a hand of Krosan Archer, Sungrass Prairie, double Forest, and Muscle Burst. The Archer went straight to the out of the game pile via a Syncopate the very next turn, and Brian sought to go on the offensive with a Dusk Imp.

Matt's next turn involved casting a freshly drawn Reconnaissance, and playing a Diligent Farmhand. Brian answered with Dreamwinder, which lead to the following combat exchange:

Matt attacked with both of his 1/1 creatures, and Brian threw the massive serpent in front of the Werebear. Matt had several plays at this point, the wisest of which seemed to be sacrificing the Farmhand to search for a land, and then give the blocked druid +4/+4 from the enhanced Muscle Burst. Instead, Matt gave Brian two for one card advantage by simply Muscle Bursting the bear. (After the game, Matt not only admitted he shouldn't have attacked, but stared slack jawed in disbelief when asked why he hadn't made the above play).

Brian pressed his offense with a Childhood Horror, and used a Predict to bring his graveyard total up to six cards. Matt recruited Rabid Elephant onto his team, and brought down a Sandstone Deadfall to stop some of the flying damage. He easily could afford to lose lands due to the earlier land search, and killed the Horror on the next attack phase. 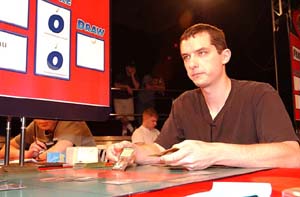 The game shifted into the Canadian's favor over the next few turns, as he added a Krosan Archer to his side, and the game ended shortly with Brian revealing a hand full of lands.

Before the third game began, Brian noted that he had just turned 21 this past year, and that he had been playing Magic since 15. Sometimes one forgets that many of the giants of this game are younger players.

Brian opened the game with a Swamp and an Island, with Matt playing a first turn Farmhand followed by a second turn Werebear. Kibler's Peek showed an impressive curve from Matt: 2 more Forests, an Elephant Ambush, a Springing Tiger, and Sandstone Deadfall. Brian played a Cephalid Looter on his next turn, and waited for the inevitable. He would wait a while longer, as inexplicably Matt chose to attack with his Werebear instead of playing one of his dual 3/3 creatures! In fact, after the attack, Matt sat there looking at his mana and wondered where his fourth mana source had gone. Kibler gave him a look that I could only interpret as "you poor fool!" and Matt responded with the silent "what can I say, I'm a schmuck?" as he laid the not-quite impressive artifact on his third turn.

Things went horribly downhill for Vienneau from there, with the Looter allowing Kibler to achieve an early Threshold and trade useless lands for creatures such as Childhood Horror, Frightcrawler, and multiple Gravediggers. Every creature Matt played was met with bounce or creature removal. Even though he mustered some offense with a late Muscle Burst, it was not enough to staunch the flow of massive beatings. When Brian Dematerialized Matt's last blocker, the game was over.