Round 1: Bronwyn Bruce vs. Marcus Hodges 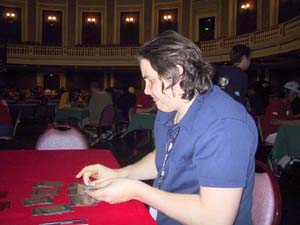 After travelling over a thousand kilometers to get to the Grand Prix, the last thing you want to see when you sit down at your first pairing is a player from the same state as you, and this is exactly what the two players saw. Both Bruce and Hodges are well known players from Victoria and frequently travel interstate for the large events on the magical calendar.

Having won the die roll Bruce elected to go first, and waited for Hodges who was forced to begin the game with a mulligan. Both players were off to a sluggish start with Bruce casting a turn 3 Leaf Dancer which was met by Hodges turn 3 Mad Dog. Since Hodges only green source was a Centaur Garden, Bruce decided that attacking into the Mad Dog was not the best option and simply passed the turn to Hodges. The Mad Dog showed no fear as it plunged straight into the red zone drawing the first blood of the game. Hodges dropped down an Ember Beast to replace the bounced Mad Dog. Bruce then attacked with the Leaf Walker and had no other turn 5 play once again passing the turn with a lone Leaf Walker, Hodges could do nothing more than recast his Mad Dog and say done. 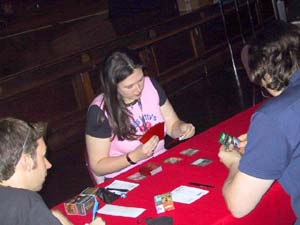 With no way through the growing wall of men Bruce played a Twigwalker and passed the turn back to Hodges who let fly with the Mad Dog and Ember Beast dropping Bruce's life down to 13. Bruce attacked back with the Twig walker and the damage race was on, summoning a Krosan Archer to hold down the fort. After Hodges summoned a Werebear off his Centaur Garden, he entered his attack step, only to see his Ember Beast bounced with an Aether Burst. Unphased, he sent his Dog straight into the red zone, and when Bruce blocked with the Archer she was a little surprised that it managed to live to the beginning of her turn. Now it was Hodges turn to go on the defensive as he tried to shelter his chump blocking Werebear to draw more cards. Bruce would have none of that and used Rites of Refusal to prevent him from casting the spell and after drawing nothing to help him deal with the situation Hodges packed up for game 2.

Starting first Hodge was on the ball as he used a Volcanic Spray to remove Bruce's first turn Diligent Farmhand. Bruce however had a great draw dropping a Cephalid Scout on turn 2, a Twigwalker on turn 3 and even a Patchwork Gnome when she stalled for mana on turn 4. Hodges again only had the Centaur Garden as his green source and was forced to take a damage as he solidified his mana base with a Werebear on turn 4. After drawing her fourth mana Bruce cast Otarian Juggernaught, forcing Hodges to cast Shower of Coals during his turn targeting the scout, the gnomes and the Juggernaught. 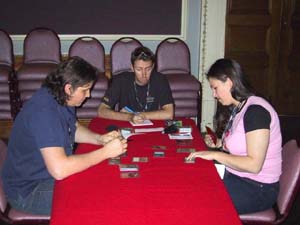 The reason to not regenerate the Gnomes became clear when Bruce drew another land and dropped Rabid Elephant, while still crushing Hodges life total with the Twigwalker and Juggernaught. Things were really starting to look grim for Hodges but he battled on, summoning an Anarchist to get his Shower of Coals back from his graveyard. Bruce's assault was relentless as she summoned an Aven Fisher and sent the team in again, forcing Hodges to chump block the Elephant with his Anarchist. Even with the Anarchist assisted Shower of Coals killing the Twigwalker, Aven Fisher and dealing 2 damage to Bruce, Hodges was unable to find an answer for the Rabid Elephant, and when his last blocker was Aether Bursted to give Bruce threshold she simply attacked unopposed for the win.