Round 1: Chris Benafel vs. Albertus Law 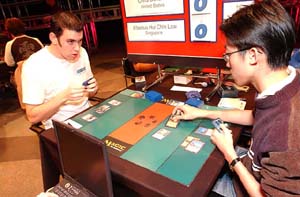 Pro Tour Osaka started off with one of Singapore's top players squaring off against one of America's best. Law muliganned his opening hand after winning the coin flip. Law was playing U/G, the deck most pros predicted would be the most played in the tournament. Benafel played a U/R/b deck designed by Brian Kibler and Ben Rubin that most of the Magic Colony is playing in the tournament.

Albertus got out the quick start with a turn two Basking Rootwalla and a turn three Aquamoeba. Chris attempted to cast Chainer's Edict, but Law quickly countered with Circular Logic. The Singaporean played a Roar of the Wurm out of his graveyard, but Benafel had Aether Burst to deal with it. Chris failed to deal with the Aquamoeba, and he eventually succumbed to the 1/3 monster.

Benafel, a member of the new team CCGHouse.com, elected to play first. Law was forced to mulligan for the second straight game. Law got out a first turn Basking Rootwalla, but missed his second land drop. He cast Obsessive Search, finding his land, and then cast Wild Mongrel. Albertus discarded Roar of the Wurm to his Wild Mongrel; Chris laid a land and cast nothing for the seventh straight turn. On Chris' end step, Albertus cast Arrogant Wurm, Benafel responded with a Violent Eruption targeting the Mongrel and Rootwalla. Law cast Aether Burst on his Mongrel and cast Circular Logic in response. Benafel took six damage the next turn, leaving him at three life. He attempted a desperate Upheaval, but Law had the Circular Logic to deal with it and Benafel extended the hand.