Round 1: Chris Benafel vs. Gary Wise 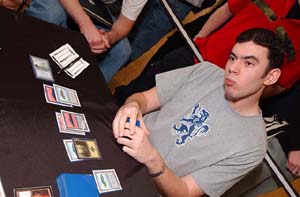 There is no love lost between these two big name competitors (reference Team ABU vs. Potato Nation at the last PTNY), and sparks were sure to fly when they had to face off against one another. Both were playing green/blue oath, but Benafel's deck is also running the Illusions/Donate combo.

Benafel was anticipating heavy scrutiny from Wise, so he asked the table judge to check his own deck for marked sleeved before Wise even sat down. The judge okayed them. Wise sat down, and then quickly jumped back up and huddled and whispered with head judge Rune Horvik for a few seconds. As he sat back down, Benafel snickered, "Is there a problem Gary? Seeing things?"

As predicted, Gary took Chris's deck and started pile shuffling it, and after looking at about ten cards, he yelled for a judge.

GW: "Judge! He has two bent corners and a marked sleeve."
CB: "I already had the judge check my sleeves."
GW: "Well that's not my problem. They're still marked."
CB: "Your sleeves have marks on them, too." GW: "Then call a judge."
CB: "I would, but I figured we could, you know, play Magic."
GW: "I don't trust you as far as I can throw you."

After the judges determined that Chris's sleeve were not noticeably marked, the two players continued shuffling.

CB: "So you wanted to start out like that."
GW: "You started this a long time ago."

The judge asked them to be quiet, but they managed to get a few more digs in before drawing their opening hands. Gary said he'd keep, then Chris looked at his own opening hand and said, "Go nuts."

The game dragged on, as control on control matches tend to do. At one point, Benafel sacrificed a Powder Keg to get rid of Gary's Phyrexian Furnace. Gary popped the furnace to draw a card, giving him eight, and then wanted to end his turn. "Discard?" he asked. Here's where it gets fuzzy. Some people say Benafel said, "Yeah," meaning "Go ahead and discard, I'm not going to use my Thawing Glaciers this turn." But Benafel still had his Powder Keg in his hand, which he claimed indicated that its ability had not resolved yet, even though the Keg should have been put in the graveyard upon announcement. Hence, Gary could not have entered his clean up step because the Keg had not resolved, or something. Gary called Horvik over, and the head judge started polling the audience about what happened. Gary kept pressing the issue, and finally Benafel asked Horvik, "Why does he keep getting to do this? Why are you going to believe him?" 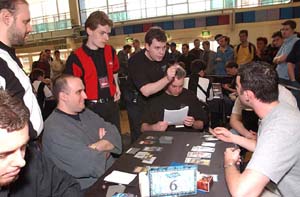 GW: "Because you are a savage cheater."
CB: "How can he just say that about me?
GW: "Because it's true."
CB: "Well, I could call you a ..." Benafel then went on a little rampage, using some heavy language against Wise. Tournament Manager Jeff Donais was in the vicinity, and he was not happy with Benafel's outburst. "Watch it," he said, getting up in Benafel's grill, "You don't have any chances left. So you'd better cut it out."

Horvik issued a double Unsporstmanlike Conduct warning, let Benafel use his Thaw, and the players calmed down. On his next turn, Benafel cast a Spike Feeder, and said, "Done."

A turn later, Gary cast Impulse and waited for a response from Benafel.

Horvik then instructed the players that they were only allowed to communicate by stating what their cards did. No other comments. Understand that the banter recreated above is only a fraction of what really happened, so the tempers were getting quite high. The match was now being watched by a level 5 judge (Donais) and a level 4 judge (Horvik), yet both players were unwilling to stop trying to get the psychological upper hand.

Luckily for all involved, they played quietly for a while, and the game itself heated up. Each player had out a ton of land, and Benafel cast and resolved an Illusions. Wise cast an end-of-turn Fact or Fiction, which Benafel let resolve. He split it as Accumulated Knowledge vs. four other cards, and Wise chose the AK, and then cast it and drew two cards.

Wise passed on his own turn, and Benafel decided to start a permission war. He cast his own AK and drew three. He then cast another AK, which would have been for four. Wise said, "That one's not so easy." Then the stack started growing. 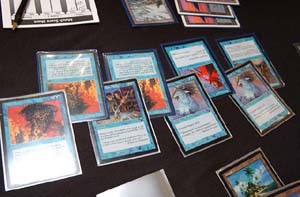 Wise cast Counterspell targeting the AK. Benafel responded with a Brainstorm, which Wise let resolve. Benafel then added his own Counterspell to the stack. Wise cast another AK, which Chris let resolve, drew four, and then cast yet another Counterspell, this one targeting Benafel's Counter. Benafel pitched a card to Force of Will. Gary then cast ANOTHER AK, hoping to draw five more cards, but Benafel had another Force of Will. Wise, with a hand full of cards, Forced back. His AK finally resolved, he drew five, then Forced Benafel's original AK. Sure, Benafel didn't get to draw many cards, but he got Wise down to three untapped land.

Benafel paid the upkeep for Illusions and the got very lucky, drawing a Counterspell off the top. He cast Donate. Wise returned three Islands to Thwart. Benafel Counterspelled. Wise cast another AK – this one for seven cards! But no free counter came forth. He used his last mana to Brainstorm, but no luck. Donate resolved.

Wise had one last chance. He untapped, drew, and played a Spike Feeder. But somehow, after all that countering, Benafel still had a Force of Will left. Wise responded with a Brainstorm to get one card deeper, but to no avail. 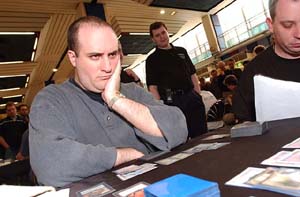 Benafel sided out his combo and opted for counter-control with Roar of the Wurm, Spike Weaver, and Treetop Village as the win condition. Wise fell for it, siding out all of his creature control and tried to go beatdown with Call of the Herd.

The two were at each others' throats again at the beginning of the match, but eventually they got bored with antagonizing one another.

Wise resolved a Call of the Herd, but Benafel had a Keg. Benafel had a slow start on land, so he had no blue untapped when Wise got to five mana. The Englishman went for the throat, tapping out for Morphling. Benafel Forced, but Wise had the Thwart, going down to two land in play.

Benafel calmly untapped, played a land, and tapped five for Submerge, putting the Morphling back on top of Wise's library. The Thwart looked good initially, but it cost Wise major tempo. 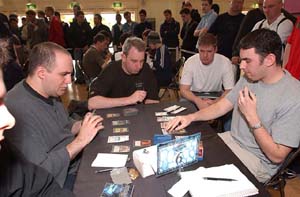 Benafel Kegged away the elephant token, and resolved a Spike Weaver. Wise flashed back the Call, and the two 3/3's stared at each other for about ten turns. Eventually Benafel got up to eight cards in hand, and discarded a Roar of the Wurm. Wise grimaced, realizing that he had no good way of stopping 6/6 creatures.

Benafel cast the Roar from his graveyard. Wise resolved both parts of another Call. Benafel cast another 7-mana Roar from his hand, and then countered one half of Wise's third Call. The board was quickly filling up with tokens.

When Benafel Forced of Willed Wise's later attempt at Morphling, it was all over but the signing. The 6/6's backed with Spike Weaver tricks were too much for the elephants.

No, they didn't start scrapping after the match was over. After three hours of insults, accusations, and large Counterspell wars, the whole thing ended rather boringly, with Benafel grabbing his cards and running to his next match, leaving Wise to lament his sideboarding choices.