Round 1: Chris Pikula vs. Brian Kibler 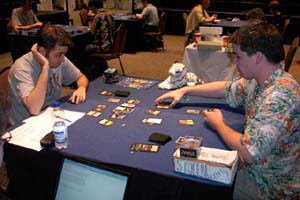 Pikula elected to draw first in the match, but it did not help him procure a second land. A single swamp is what he had to work with. Kibler meanwhile, played a Soldevi Sentry and enchanted it with Unholy Strength. Pikula was able to gain some card economy by removing this very large (in this format anyway) creature via Nasty Spite.

Kibler's deck was all about the beat-down this game though. He busted out a Llanowar Elite and enchanted it with Silkwood Armor. Carnophage followed suite. Down to eleven life points, Pikula finally stabilized the table with Nomads en-Kor, Zombie Cannibal, and Sarcomancy. Pikula blocked the Carnophage with his Zombie Cannibal and Nomads en-Kor, then redirected the damage to the Zombie, keeping his en-Kor in play and managing to trade a 1/1 for a 2/2. He looked to have finally be gaining control of the game when he summoned Vebulid, but Kibler began attacking in the air with Circling Vultures.

"Mark, you always put one really unfair card in," Pikula appealed to Rosewater. "And this time its Circling Vultures." Indeed, the Vultures went all the way, giving Kibler a quick win in the first game. "You should have played red for a Vertigo," Kibler added insult to injury.

Despite the very aggressive nature of Kibler's deck, Pikula elected to play second again. Kibler took advantage by summoning a Carnophage and enchanting it with Unholy Strength for some early damage. Pikula responded in kind by enchanting his Soldevi Sentry with Holy Strength.

Good may always triumph over evil, but it does not win the damage race. Despite taking one every turn from Carnophage, Kibler was ahead, and more so after having tapped out the Sentry with Paralyze. 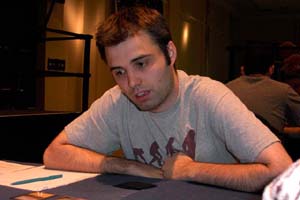 Pikula was making a comeback by playing out more 1/1 critters than Kibler had. Kibler enchanted the Carnophage with Sadistic Glee, then blocked a random 1/1 with his Vebulid, to send both creatures to the graveyard and make Carnophage much larger. Pikula managed to stabilize the board at one life. Both players summoned their broken Circling Vultures, but Pikula had Icatian Scout in play, and so Kibler's Vulture had to go to the graveyard once there were no more creatures to feed it. Pikula used the Tireless Tribe ability to discard a creature from his hand and kept his Vulture in play a turn longer, bringing Kibler down to three life points. Kibler, who never drew a Forest but was holding four green cards, lost the game. Kibler seems to have forgotten the fact that Wild Dogs cycle and never used it to draw another card - that may have been enough for him to swing the game, if there was a Forest on top of his deck.

While shuffling for game 3, Pikula realized that he had forty one cards in his deck. After much complaining and bemoaning the mistake, the two players realized that Kibler's Paralyze was in Pikula's deck. The renegade enchantment was returned to its owner, and the match continued.

Kibler could not muster up the early damage he managed in the previous two games. Instead, both players summoned a horde of 1/1 dorks each, sending the game fast into a potential standstill. With plenty of permanents in play, Pikula finally got a way to get some damage through. He enchanted Nomads en-Kor with Capashen Shield and Fylgja and started sending it in. Kibler had an unexpected trick - he blocked with Soldevi Sentry and regenerated it, dealing one damage to it, then used Fatal Blow to take it out. "I can't believe you are playing this card!" exclaimed Pikula. 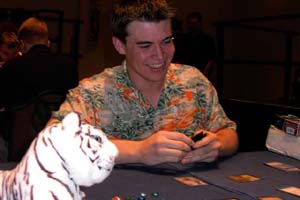 Back on the offensive, Kibler got out a Circling Vultures. He had plenty of creatures in the graveyard, thanks to a lot of one-for-one creature trades in the early game. The Vultures could potentially go all the way. At one point though, Kibler forgot to remove a creature from his graveyard before drawing a card. Pikula allowed him to take it back. Being a true sportsman cost him the match though - the Vultures did in fact go unopposed for the win, as the ground creatures were still in a stall.

"Would you have let Zvi take it back?" asked Rosewater, referring to a game situation two years ago where Pikula did not allow Zvi an important take-back.

"I am sure he is not gonna be happy when he reads about this in a coverage," Pikula dodged the answer.

"I hate this tournament. You actually have to wish your opponent good luck."
"Anyone ELSE accidentally play forty one cards in their deck?"