Round 1: Chris Pikula vs. Tommi Hovi

The two sat next to each other in the draft, with Hovi feeding Pikula. The color lines were drawn early, with Hovi in fourth seat the first to take a green card. Pikula went for blue and was rewarded with Thought Devourer followed by Persuasion. And though he was pretty well situated for blue-black, Hovi was one of only two dedicated green drafters at the table. Hovi ended up with a red-green powerhouse sporting doubled-up Mongrels, Springing Tigers, and Werebears, and a splashed Vampiric Dragon. In addition to Pikula's power rares, he has two Painbringers.

Hovi won the die roll, and used Deep Reconnaissance to get a swamp and generate a fourth-turn Gorilla Titan. Pikula's board was a Dusk Imp and three lands. He made a Thought Devourer, losing Peek and Scrivener to its drawback.

Hovi untapped and started thinking. He could flash the Deep Reconnaissance back, emptying his graveyard and jumbo-sizing his Titan. After assessing the possible outcomes, he chose that path, taking Pikula to twelve. Pikula untapped and counterattacked, evening the score. He thought hard and made a Painbringer. It was not looking good.

Hovi dropped Seton's Desire on his Titan, crushing Pikula's hopes. Pikula shrugged and let it by. Hovi showed him Firebolt. It was a turn-six kill.

"That's a pretty fast clock. You killed me turn six. Brutal. I might have been able to win that game just by Predicting you." 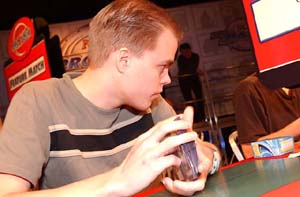 In Game 2, Peek showed Hovi had two mountains, Deep Reconnaissance, Acceptable Losses, Chainflinger, Metamorphic Wurm and Vampiric Dragon to go with his forest on board.

While Hovi build his mana base, Pikula made Puppeteer and Crypt Creeper. Metamorphic Wurm gave him pause. He took to the air with Childhood Horror. Hovi hit back for three. Then Hovi displayed his sideboard technology: Ground Seal, ruining Pikula's chances to keep him from threshold and overcosting Scrivener. He also made a Chainflinger. Pikula's Famished Ghoul was not as impressive.

Hovi continued to play excellent creatures, this time a Springing Tiger. Woe to Pikula if Hovi should get six more cards in his graveyard. However, the Tiger served Hovi better by trading with the Tiger. The extra card sent to Pikula's graveyard let him Ghastly Demise Hovi's Metamorphic Wurm.

So now Pikula was in the driver's seat, his Puppeteer keeping Chainflinger to one damage a turn, and his Horror sending in the air. Squirrel's Nest turned the race around. Pikula Diabolic Tutored for Dematerialize to shut that down, but in the meantime Hovi added Halberdier. The life totals were twelve to nine in Pikula's favor. 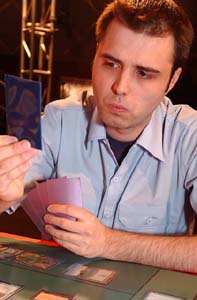 And then, it all fell apart. Hovi's Acceptable Losses dispatched Childhood Horror, while the extra cards in the graveyard powered up his Chainflinger to take down Puppeteer. Pikula tried to avoid disaster with Persuasion on the Chainflinger, but Hovi just made a 5/5 Tiger. Zombie Assassin showed up to ease the pain. Hovi calmly laid his eighth land and summoned Vampiric Dragon. Pikula scooped.

Afterwards, Pikula mused on his Diabolic Tutor play. Knowing Hovi had Acceptable Losses, he couldn't very well get Thought Devourer. Having it killed wouldn't get him to threshold, and so he definitely wouldn't be able to race. He decided that the real turning point was when he chose to Demise the Wurm. He could have hit the Chainflinger instead, and kept the Wurm busy with Puppeteer. Then Persuasion could have taken the Wurm went it went large. Hovi was short on ways to handle Puppeteer, so dispatching it prior to Threshold was key.