Round 1: Christina Gerhardt vs. David Nolan 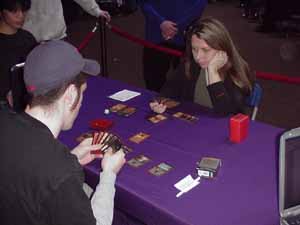 Those who attended Pro Tour-Chicago may remember a little promotion held by Alex Shvartsman and his crew from Kings Games. Simply put, any participant in a Chicago side event stood the chance to be flown out here to Boston. Christina Gerhardt was the lucky winner, and now she sits amongst the six-hundred players here at Grand Prix-Boston with her husband, trying to make the most out of King’s Games’ generosity.

Gerhardt is armed with a R-G design that is equipped with the typical tools of the trade. Her highlight is a shiny Brontotherium that should have considerable impact in this game. David is with B-R-g with his foil, a snazzier Bane of the Living. After a supportive “Chris, no pressure!” from her husband along the sidelines, the two players were off. 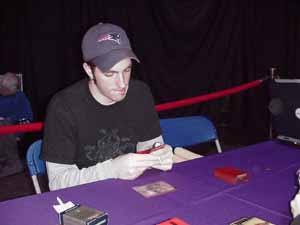 Playing first, Gerhardt missed both a first and second turn play, opting to hold back her Skirk Marauder for the next turn, playing the card advantage route instead of the tempo route. Nolan’s Crown of Fury on his Goblin Turncoat played right into Gerhardt’s plans, as the Marauder was revealed, offing Nolan’s early attempt for blood. An amplified Embalmed Brawler (revealing Anurid Murkdiver) provided an answer to Gerhardt’s offending goblin, so she simply decided to hold back, expanding her creature base with the much-controversial Elvish Warrior and Flamestick Invoker. A Screeching Buzzard from Nolan gave him some way around Gerhardt’s defense, and it was now off to the races. Mystery Morphing Dude #2 hit the table on Gerhardt’s side, which was matched by Morph #3 from Nolan. Cards raced through both player’s minds, each trying to figure out what the opposing morph was.

Brontotherium hit play, lighting up the table with shiny, shiny goodness, and now Nolan’s board didn’t quite look so good. Vitality Charm in Gerhardt’s hand would only make Nolan’s situation worse. Gerhardt made a misplay here, playing the Skrik Outrider before the Buzzard died, thus being forced to discard the Vitality Charm in her hand to the Buzzard’s ability. That meant that when Nolan revealed his Skirk Marauder to go with the two damage from the Buzzard, Gerhardt was unable to save the Brontotherium, even though she still had a small window of opportunity by putting a regeneration shield on her Beast in response to the Buzzard’s discard effect.

Morpher Number four hit play on Nolan’s side, and it and next turn, Nolan tapped

and revealed his new acquisition- Bane of the Living. It wiped out Gerhardt’s entire force, save the Elvish Warrior, while only offing Nolan’s Skirk Marauder, which had done its job anyway. The Anurid Murkdiver that was still in Nolan’s hand came into play the next turn, convincing Gerhardt to concede. 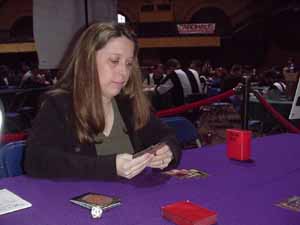 A mulligan from Nolan brought up Gerhardt’s hopes, and he peeled a hand with two Swamps and four red cards. Not exactly what you’d hope for. Fortunately, Gerhardt’s board was similarly lacking in action, with three turns passing with no plays on her side. Cycling a Lay Waste gave Nolan a much-desired Mountain, letting him play the first morph dude of this game. Gerhardt’s reply to that was a fourth-turn Krosan Vorine, to which Nolan revealed a Skirk Marauder, killing the Vorine before the Vitality Charm in Gerhardt’s hand could save it. Lacking options due to a certain lack of a second forest, Gerhardt cycled a Macetail Hystrodon in an attempt to get more goodies, but only got a Nosy Goblin that entered play on her following turn. By now, Nolan’s board has increased by a Goblin Taskmaster and a second Morph creature. After some thought, Gerhardt decided to act now, and blocked the Morph with her Nosy Goblin. When Nolan revealed Thrashing Mudspawn, Gerhardt’s outlook was grim. Fortunately, she finally peeled the second forest, that enabled her to play a Needleshot Gourna to hold things off, but Nolan knocked on his deck, and revealed the perfect answer- Frenetic Raptor. With Gerhardt rendered unable to block, Nolan went in for the kill. He swung once, he swung twice, and then out stretched the hand.