Round 1: Cole Swannack vs. Darwin Kastle 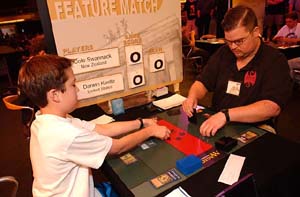 Last year in Sydney, Cole Swannack was definitely the talk of the tournament. At thirteen years old, he qualified for Worlds as the New Zealand Champion, and had a spectacular run. The young prodigy defeated some of the best the world had to offer, including Albertus Law and Gary Wise, ending the week with a 17th place finish. Now a year older, wiser, and likely even better, Swannack has returned to Worlds as a member of the New Zealand team, and is looking for individual accomplishment as well as national achievement.

In his way in the very first round is Pro Tour veteran Darwin Kastle. Kastle is third on the lifetime Pro Tour points list, behind Kai Budde and Jon Finkel. He also had a resurgence on the Pro Tour this past season, with two Top 8 finishes in Constructed events. Today, Kastle is playing a Your Move Games signature deck- Reanimator. Swannack is running green/blue, the deck he played in both the Standard and Block Constructed portions of Worlds last year.

Swannack's Aquamoeba came out on turn two, and Kastle played Last Rites, discarding Phantom Nishoba, a mountain, and another Last Rites. Swannack lost Circular Logic, Careful Study and Phantom Centaur, leaving him with two Roar of the Wurm and Ray of Revelation in hand. Swannack untapped and attacked for three with Aquamoeba, discarding Roar of the Wurm. To Kastle's dismay, Swannack had drawn Quiet Speculation off the top, and used it to get two Deep Analysis and Roar of the Wurm. Kastle did some of his own graveyard tutoring, using Buried Alive to get Anger, Visara the Dreadful and Arcanis the Omnipotent. 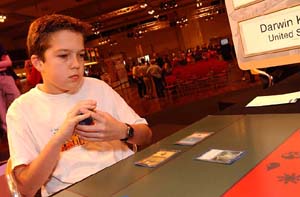 He did not make his fourth land drop, but Swannack was stuck at two himself. Deep Analysis drew into a third land, and the Aquamoeba attacked for three. When Kastle tried to Stitch TogetherArcanis, Swannack had drawn into a Logic, and countered the reanimation spell. The following attack brought Kastle down to nine, and Swannack flashed back Roar of the Wurm to put more pressure on the board. Kastle had another Stitch Together, and this time it resolved, putting Visara into play. Thanks to Anger it had haste, and was able to start shooting down Roar tokens with ease. Doomed Necromancer came out a turn later, putting Arcanis into play. With the two Pit fighter Legends in play gaining tremendous card advantage every turn, another Necromancer was enough to convince Swannack to concede.

Swannack mulliganed his opening hand, as Kastle pointed out that he hated playing blue/green because it required aggressive mulliganing. Careful Study let Swannack discard two City of Brass, and Kastle fixed his mana with a pair of fetch lands. Burning Wish searched out Buried Alive, and Kastle summoned Doomed Necromancer on turn three. With Buried Alive, he could get Anger along with whatever monster he desired, and put it into play right away.

However, he was lacking the fourth land to make that play. Instead, he simply attacked for two, and his Buried Alive was countered with Circular Logic. Swannack started to build up some threats with Phantom Centaur, and Kastle had another Buried Alive, getting Akroma, Arcanis and Anger. A fourth land still wasn't available, so Kastle had to end his turn and take a hit from the Centaur. A second hit brought him to eight life points, and Doomed Necromancer brought Arcanis into play on end step. This was followed by Tainted Pact, and Kastle stopped at his first card, which was a land. 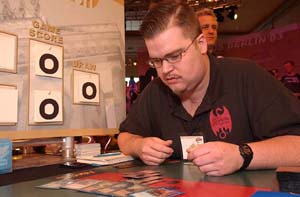 Despite Kastle's tremendous card advantage, Swannack had two Circular Logic to go along with his bounce spell, and had a chance to simply kill Kastle before he could stabilize things. Zombify was countered with a Logic, and Unsummon bounced Arcanis. The resulting Centaur attack brought Kastle to three, and he would need two threats in order to have a chance, since the first one would be countered.

Indeed, Last Rites cleared the way for Burning Wish to get Innocent Blood, handling the Centaur problem. Swannack's only chance was the Roar token in his graveyard, but he drew another threat in Aquamoeba, and had just enough mana to play both in one turn. Kastle seemed to be in a little bit of trouble, but was able to use Buried Alive to fetch Ancestor's Chosen, which brought him back to eighteen life. This gave him the time he needed to put his plan into action, as Akroma was able to end the game.