Round 1: The Couple That Plays Together: Kate Stavola vs. David Williams / Pat Sullivan vs. Eugene Harvey 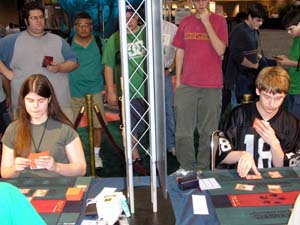 "Apparently someone still thinks this is cute," growled Kate, narrowing her eyes at the culprit.

Randy Buehler dismissed her consternation with a wave of his hands, "Your opponents do have a certain amount of cachet, Kate."

And Randy was correct. Patrick was sitting across from Eugene Harvey; former National Champion and two-time National team member. He is also on the extremely short list of the best American Magic players.

There was also some history at work on that side of the table. Harvey used to be part of TOGIT but hasn't moved on to be part of the newly formed Seven Kings. Pat was not only a TOGIT member but he was also the owner of the store of the same name. Pat, who usually sports the finest '70s throwback jerseys, mixed things up for this event with an extremely current Randy Moss Raiders get-up.

"It is very up to date…it's the latest thing," he said.

Kate's opponent also has a little history of his own. Dave Williams is most famously known in Magic circles as one of Courtney's Men - a team featuring Dave, Neil Reeves, and Bob Maher - but he is known all around the world for his second-place finish in the 2004 World Series of Poker. Dave has played in just about every Magic tournament he has found himself qualified for since his WSOP experience. He was pleasantly surprised by his Level 2 status and brought an interesting little 60-card concoction with him this weekend. 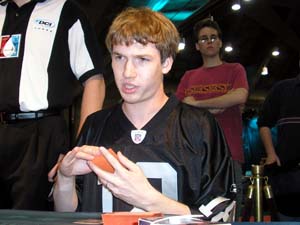 Patrick and Eugene kicked off their respective first turns with Chrome Moxes. Eugene imprinted a blue card on his and used Serum Visions. Patrick made a Hearth Kami and killed his friend's Mox - and only blue source.

Eugene was unfazed and played all three Urza pieces by the third turn.

Patrick stared at the board slack jawed, "Are you kidding me?"

"No," smiled Harvey as he put down Mindlsaver.

Patrick walked away from the table as Eugene took his next turn. A judge came over and gaped at the empty seat, "Ummmm…"

Patrick noticed the judge and came over to point at the Mindslaver in Harvey's bin. "There is no need for me to be here."

"You can understand why I was confused," apologized the judge.

One Mindslaver later, Game 1 was all over. 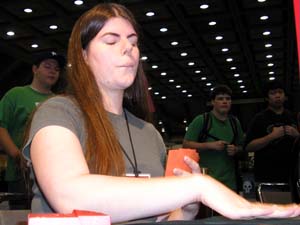 Kate Stavola focuses her chi for the right card.

Williams had a Bringer of the Black DawnDistressed from his hand. He recovered nicely though with some mana fixing and a blue Bringer. Stavola - who was playing Rats - sent a flipped Nezumi Shortfang into the red zone a couple of turns later. Dave did not chump block with one of his Birds and was kicked in the gut by Ink-Eyes, Servant of the Oni. Kate tutored for Rend Flesh on her next turn and Dave's game was pretty much over.

At the end of the Nationals weekend, there is some kind of notice given to the top finishers in each format - the players who 7-0 Constructed and the players who 7-0 Limited. Perhaps they should add an award for the Best Hit by Ink-Eyes - you rarely see him hit anything as juicy as Bringer of the Black Dawn.

Kate was happy to have hit anything, "I have never actually taken a creature with her before."

"Nobody has," growled Dave.

Williams' next game showed what happens when Rats gets paired with slower decks. Kate tore Dave's hand apart with a pair of Shortfangs, Chittering Rats, and Ravenous Rats. By the time Dave had the mana to do any of the things his deck could do, it was too late. 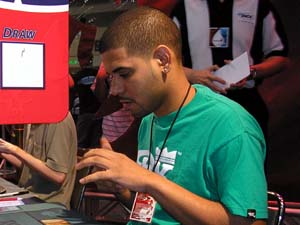 Williams was stung by Ink-Eyes.

In Game 2 of the TOGIT match, Patrick played around a Condescend for one by playing Chrome Mox on turn two before attempting his Slith Firewalker. Eugene made him tap a mana anyway to look for help from his deck but none was coming. Patrick had a second Slith to follow up and the game was over shortly thereafter.

Pat used sideboarded Shatters to answer all of Eugene's sideboarded artifacts and another pair of Sliths ate up Eugene's life total in escalating chunks, making Game 3 a quick one.

Red Deck Wins and Rat Deck Wins swept the matches for the married couple even if they could not agree on a single deck.

"Even if we could agree on a deck," said Kate. "I doubt our household could scrape together enough cards to build two copies."