Round 1: Craig Krempels vs. Matt Place 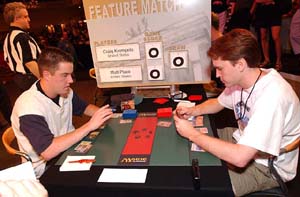 CMU/TOGIT member Craig Krempels has an outside shot of winning this year's Rookie of the Year race. It would involve a 1st or 2nd place finish this weekend and for Rookie race frontrunner Masashi Oiso to be abducted by aliens. Craig was playing a Mirari's Wake deck with Exalted Angels and Decree of Justice.

Standing in his way was Matt Place. Matt was last seen winning Pro Tour Mainz in 1998. He left the game shortly thereafter, resurfacing periodically at large events—most recently at Pro Tour Barcelona. Long enough ago that he was unfamiliar with the red Zone mats in the feature match area and Mark Rosewater reviewed the peculiarities of using it.

Matt has been playing again lately in Kansas City at Collector's Cache and other local stores. Apparently the old skills haven't atrophied much because he is at Worlds on the basis of a ratings invite. He is running the same Sligh list as Justin Schneider and former Deadguy teammate Jon Finkel, which forgoes the Siege-Gang Commander for cheaper efficient creatures.

Mark Rosewater asked Matt about the differences between playing in the four digit DCI number days of Magic and playing today. The answer was simple for Matt, "You run into more players that know how to play the game well."

Matt is a big fan of the current block and credits it as the reason he has taken the game more seriously, "I love Onslaught block but I did not like Odyssey so much. Madness seems like a mistake to me but morph is really cool!"

Matt could not keep his opening hand and shipped it back for a more acceptable six. His hand did not contain much in the way of action and he got nothing going until a turn three Goblin Warchief after fetch lands on the first two turns. He played out a Gempalm Incinerator on the next turn and was able to drop Craig—who had cycled renewed Faith along the way--to sixteen. 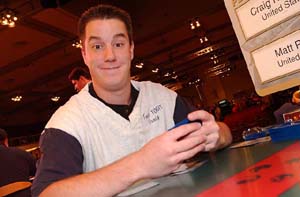 Craig had the turn four Wrath and took out the two creatures. A lonely Goblin Sharpshooter was Matt's post-Wrath play and Craig saw a window to play his Mirari's Wake.

Matt sent a Clickslither into the red zone and the Sharpshooter got his ping on briefly before being sacrificed to the goblin-hungry insect and he dropped Craig to ten. The CMU/TOGITer went one for one with another Wrath on the next turn. Matt played a Piledriver off of the top of his deck but Craig's deck was beginning to fire on all cylinders. He cycled another Renewed Faith and cracked his Verge EOT and untapped top plop a 5/6 Exalted Angel on the board.

Matt attempted to kill it with a Hammer and Barbarian Ring but when Craig shrugged he remembered the bonus from the Mirari's Wake and reached for his sideboard.

There were no mulligans on either side and Matt Place kicked things off with an 8th Edition Raging Goblin. Craig opened with Krosan Verge and felt confident about the match's outcome with three Wrath of Gods in his hand.

Matt pecked away with the Portal call-up and followed up with a Piledriver and then two Goblin Sledders on the next turn. Craig played his first white mana source—an Elfhame Palace—but he needed to either topdeck another or have a chance to crack the Verge.

He did get that chance on the next two turns as he had to cast Moment's Peace and flash it back. Matt kept the pressure up with Volcanic Hammers on both turns. When Craig failed to get the second white from the top of his deck they moved on to the rubber game.

Matt: "That would have been good for you last game, huh?"

Craig: "I'm pretty sure I would have won...awful Goblins."

Matt opened with Piledrivers on turns two and three. When Craig tried Moment's Peace, Matt had the Flaring Pain at the ready. A post-attack Volcanic hammer was sent domeward and the New Jersey native fell to ten. He hopped back up to 12 on the basis of Renewed Faith and killed the Piledriver with a Wrath of God. 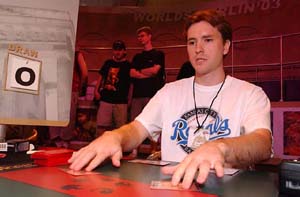 Matt played deliberately and did some mental math. When it summed in his favor he acted quickly and played out a Barbarian Ring, Sulfuric Vortex and a Goblin Sledder. Craig slipped back to ten and faced-up an Exalted Angel.

Once again Matt ran his figures. After weighing his options he played a Clickslither. Matt may not have been familiar with the red zone prior to this event but he adapted quickly. He pushed both his creatures toward the exalted Angel in the center of the table and stylishly split them to either side as if to make them run around her.

Now it was Craig's turn to think. With the Vortex ticking and a Barbarian Ring with his name written on it he could not afford to let the Clickslither through and chump-blocked with the Angel and Matt ate the Sledder to kill it.

Craig dropped to eight and cast Deep Analysis leaving four mana open. Matt was not sure what Craig had but with only one of them being white he did not fear Wing Shards. He played a face-up Blistering Firecat and sent both creatures into the red zone. Chastise ate the Firecat and Craig fell to five.

He cycled for answers and found only an Exalted Angel. He was already holding one so he played them both face down. Matt had the Piledriver and Craig packed it in.