Round 1: Dan Emmons vs. Kelly Smith 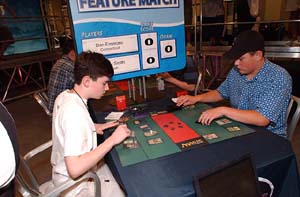 "Man, I feel like such a hick," Kelly said when he saw his name presented in the Feature Match area.

Dan led with a forest, and Kelly countered with a Brushland. Dan's second play was a Oversold Cemetery. When Kelly played an Island to keep his Brushland company, Dan saw an opening, and played a Living Wish to get a Swamp from his sideboard.

Kelly's third land was a Skycloud Expanse. "Sure thing, boss," he answered when Dan played the first creature of the game, a Nantuko Husk. Kelly cast Deep Analysis, then discarded a Plains.

Dan added a Wirewood Herald to his side of the table, and attacked for two with the Husk. On his next attack step, Dan attacked with the Husk and sacrificed the Herald to make it larger, then searched out another Herald with the first's ability.

Kelly surveyed his options carefully, then played Mirari's Wake. Dan remained unfazed, then declared another attack step, sacrificing the Herald to the Husk one more time. He elected to search out another Wirewood Herald, then played a Phantom Centaur during his second main phase.

Kelly played a Wrath of God, leaving a blue and a white mana floating. Dan scooped up all his creatures and searched with the Herald. Kelly followed up the Wrath with a flashed-back Deep Analysis, going to 6. After perusing his options thoroughly, he played a Mirari and passed the turn.

Dan opted to return Phantom Centaur to his hand during his upkeep, then played the Centaur again. He played a Wirewood Herald and passed the turn to Kelly. Kelly played Krosan Verge and passed the turn back. When Dan attempted to cast Cabal Therapy, Kelly had the Memory Lapse ready.

"Declare my attack step?" Dan asked tentatively as he swung his creatures into the Red Zone. Kelly just smiled and played his Moment's Peace. When Dan had nothing else to do, Kelly cast Cunning Wish and copied it with Mirari. He chose to find Flash of Insight (which Dan read quickly) and a Ray of Revelation. Kelly cast the Ray at Dan's Cemetery and cycled Renewed Faith, going back up to 7 life. 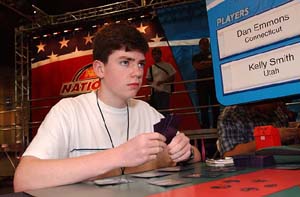 What had seemed like almost a lock for Dan has slowly swung back the other way. With eight mana, Kelly cast another Mirari's Wake and then a face-down morph creature. He then unmorphed Exalted Angel, and passed the turn to Dan.

Kelly's next play was Compulsion, and he got rid of a Plains and an Island. He attacked with the Angel, and Dan's life total dropped to 14. When Dan played a Stronghold Assassin, Kelly let it resolve. Dan attacked with his whole team, forcing Kelly to flash back the Moment's Peace from his graveyard.

Kelly cycled through quite a few cards, getting rid of Wrath of God, Counterspell, and several lands, but he didn't seem to find the things that he was looking for. He finally sacrificed Krosan Verge to get the extra shuffling in, and played a Deep Analysis through Mirari. He then flashed back and copied the Deep Analysis.

When Kelly attacked, Dan was left with little choice but to let it through. Kelly played two more Exalted Angels on his next turn – no doubt you can do things like that when you draw eight cards at your opponent's end step! Dan, in a mighty effort to come back, sacrificed his Wirewood Herald to the Stronghold Assassin to kill a single Exalted Angel. Dan then played a Llanowar Elves and declared his attack step, attacking with Nantuko Husk and Phantom Centaur. When Kelly blocked with his remaining Exalted Angel, Dan sacrificed his Llanowar Elves and then played a Caller of the Claw, sacrificing both Bears to make the Husk huge.

"I'll play Moment's Peace," Kelly said casually. "You're at eight, right?" When Kelly swung back with his Angels after this question, the game was over.

Both players were understandably concerned about the amount of time left for this pivotal third game, but the judge quickly allayed those fears. Kelly chose to play first this time, and led with Grand Coliseum.

Dan's first play was a Swamp and a Cabal Therapy, naming Memory Lapse. "Sure," Kelly said, spreading out a hand filled with land, Moment's Peace, and Deep Analysis. Dan followed up with a forest, played a Llanowar Elf, and another Therapy, naming Deep Analysis this time.

Kelly flashed back the Deep Analysis, then played a Krosan Verge. Dan played a Living Wish to get Braids, Cabal Minion, then played an Oversold Cemetery and passed the turn. Kelly played another land.

When Dan flashed back his Cabal Therapy, he named Counterspell. Kelly showed him Circular Logic, more lands, and three Moment's Peace. At the end of Dan's turn, Kelly sacrificed his Verge, and played an Island on his next turn.

Dan tapped his Birds of Paradise to play Cabal Therapy, naming Circular Logic. Kelly tried to use the madness cost of Circular Logic to counter Dan's Braids, Cabal Minion, but they got into a minor rules spat, which the judge was thankfully around to arbitrate. After determining that Kelly had indeed passed on paying Circular Logic's madness cost, Braids comes out to play and is quickly joined by Nantuko Husk on Dan's next turn,

Kelly was understandably dismayed by the judge's ruling, but kept on playing as well as he could. Dan then set up a perpetual Braids lock, with one in the graveyard and one in play at all times. With no cards in hand, he surveyed his options as Kelly used another Krosan Verge to get some more lands.

Dan sacrificed a Birds of Paradise to Braids and returned a Nantuko Husk to his hand during his upkeep. He then played a Stronghold Assassin, as Kelly tried to keep up by playing copious amounts of land. Dan attacked with the Assassin on his next turn, and then played another Birds of Paradise.

Kelly played a Deep Analysis, and also opted to flash it back, going to 12 life. He discarded a Moment's Peace during his discard phase. On his next turn, Dan attacked with Braids and the Assassin, then played a Nantuko Husk and passed the turn. 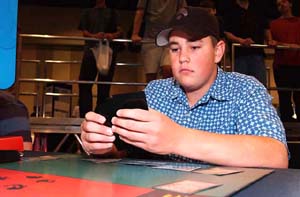 Kelly kept trying to keep up with Dan's assault by playing one of those Moment's Peaces he'd been holding on to the whole game. He then played a Ray of Revelation on Dan's Oversold Cemetery, and followed it with a Wrath of God. With a thoroughly clean board, Kelly played Deep Analysis, then passed the turn back to Dan.

Kelly cycled a few cards through Compulsion at the end of Dan's turn, then rearranged his land for a bit. He played an Exalted Angel and passed the turn back to Dan. Dan played another Living Wish on his turn, Wishing for Stronghold Assassin, which he then played in short order. However, Kelly had the Counterspell – all that guessing with Cabal Therapy doesn't help when your opponent gets to draw a ton of extra cards thanks to Deep Analysis!

Kelly finally played a Mirari's Wake, and attacked with the Angel. He played another Exalted Angel, and passed the turn. On Dan's last turn, he played a Birds of Paradise and passed the turn. Kelly played a Cunning Wish on his final turn, Wishing for Opportunity and then casting it. Seeing no ways to deal with the lone Bird of Paradise blocker, the game (and match) ended in a draw.