Round 1: Danny Mandel vs. Alan Comer 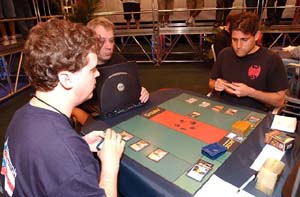 Your Move Games' Danny Mandel is running a teched-out version of Psychatog with maindeck Duresses and a few Sulfur Vents among the mana base to facilitate faster Upheavals.

Alan Comer, as he promised to his readers, is playing the Desolation Angel deck he tuned in his Deck Doctor column here on the Sideboard. Mandel does not read Comer's column, however, so he had no idea what was in Comer's deck, and immediately started kicking himself. "I should read it, I know, I know," lamented Mandel.

Mandel started the action with a turn-2 Nightscape Familiar and asked Comer to not "kill it in some weird way." He then Duressed Comer on turn 3, revealing Chainer's Edict, Engineered Plague, Counterspell, Concentrate, and Gerrard's Verdict. He chose the enchantment as he didn't want his Familiar to die.

Comer cast the Verdict on the next turn, and Mandel discarded a land and a Deep Anaylsis, which Mandel was happy to flash back on his next turn. Mandel tried to take a big tempo advantage with a Recoil on a Salt Marsh, follwed b y a Psychatog. Comer cast his Edict and Mandel lost the 'Tog. The YMGer drew another Familiar and cast it, but Comer drew Wrath of God off the top and dispatched of the two Familiars.

"I should have read your articles," lamented Mandel.

Comer started drawing the business, getting a Concentrate and a Fact of Fiction to resolve and Gerrard's Verdicting Mandel three more times. Comer couldn't find a Desolation Angel, though, and eventually Mandel drew a Fact or Fiction of his own and netted a Nightscape Familiar and a Duress. The Duress showed Comer to be holding two Wraths and a Plague, but "no way to stop an Upheaval, unfortunately." Mandel took a Plague, but didn't deploy his Familiar. 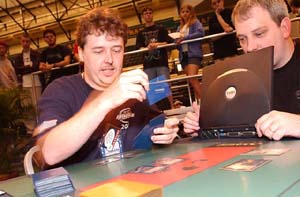 After many turns of saying "go," both players had seven cards in hand. Mandel attempted a Duress. Comer didn't want to give him any information, so he responded with a Dromar's Charm. Mandel Counterspelled, but comer had another charm. Mandel didn't fight any more and let comer have his turn.

Comer figured Mandel was out of permission and went for the kicked Desolation Angel. Mandel had a pair of Circular Logics in his hand, however, and tapped his last three mana to cast one of them. Comer had no back-up, and was forced to allow his Angel to not resolve.

Mandel then went for the throat, tapping 14 mana and casting Upheaval followed by a Familiar and two Psychatogs. Even at 31 life from all the Verdicts, Comer had no way to stop the Atogs from killing him in one attack.

Comer mulliganed in game 2 (he had to do so in game 1 as well), and kept hand of land, and Angel, and a Charm. Mandel opened with a Duress, and Comer had to ditch the Charm. Comer drew a Gerrard's Verdict off the top, but it actually helped Mandel by allowing him to discard a Deep Analysis, which he flashed back to pull out of his mana screw.

Comer didn't draw many goodies over the next few turns, and Mandel got out a Psychatog and a Compulsion, the combination of which looked to end Comer quickly. Comer put out a pair of Diamonds and hoped to draw some way to force his Angel through. 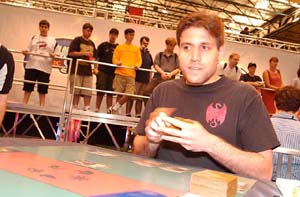 Comer did draw back-to-back Fact or Fictions, which forced Mandel to use up all his countermagic. Mandel Duressed an Alter Reality from Comer's hand (sided in to counter a pair of Gainsays), but Comer got the kicked Desolation Angel to resolve.

The problem was that Mandel's Psychatog could now kill Comer in one hit thanks to all the land in his graveyard. So Comer was forced to chump block with his Desolation Angel. Mandel laid an Island.

Comer had drawn Chainer's Edict and cast it off his two Diamonds, but Mandel's last draw had given him a Circular Logic that he discarded to his 'Tog and madnessed to essentially win the game.

After the match, Mandel commented that Compulsion was the key to the matchup as he could always find the best cards to stop Comer's limited threats. Psychatog is a difficult deck for the Desolation Angel deck to handle, even without Standstill, and Comer needed better draws if he was to have any chance of winning.