Round 1: Darwin Kastle vs. Bob Maher 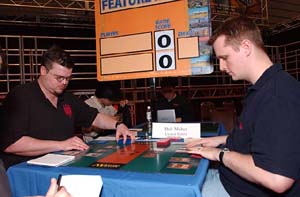 These two seasoned veterans will be playing each other at least one more time today. They are scheduled to fight it out in the semi-finals of the Masters series to see who will get to face Gabriel Nassif in what amounts to a $15,000 ante match. The loser of the semi-final match will have to console himself with a meager $6,500.

But that would be a battle for another time. The matter at hand was getting the Pro Tour off to a good start. As they were shuffling Bob became concerned with little manufacturer's defects in a portion of Darwin's deck and pulled those cards aside and asked a judge to look them over. Darwin was frustrated because he had just opened a new pack of sleeves for his deck. While the judges looked over the marked cards to discern whether or not there was a pattern, Darwin pored over Bob's sleeves, "You must use a better brand than mine because yours are fine."

Bob was annoyed by the comment and retorted, "That is because I look at my sleeves before I use them to make sure." Still Darwin found three cards that he asked Bob to resleeve. Jeff Donais took a quick glance at the cards—two lands and an Erratic Explosion and determined there was no pattern to the cards and told Bob to resleeve them. When the judges were done looking at Darwin's deck they determined that there was no pattern and made him resleeve, which he did with the help of the judge to ensure no further problems.

While all of this was going on Matt Linde had already won the first game of his feature match against Itaru Ishida when he went turn two Cloudreach Calvary, turn three Gustcloak Harrier followed by another Cloudreach.

With the games before the game out of the way Darwin and Bob were finally ready to go.

Both players kept their openers and Bob came out of the gate with a Goblin Sledder. He had not follow up until turn four because his next two land drops were Forgotten Caves. The Sledder got in its beats until Darwin played a third turn mystery man. 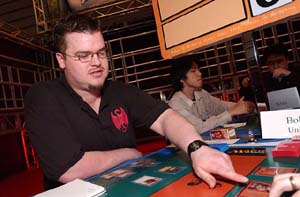 Bob played a face up Battering Craghorn and Darwin answered with an Akroma's Devoted. Bob missed his fifth land drop but played a Festering Goblin and sent his Craghorn into the red zone and Darwin fell to 15. Blade Sliver joined Bob's side and he passed the turn back to Darwin who was reading and rereading his morph appreciatively, signaling that something was coming.

Darwin picked up his morph again and read it one more time. He checked the number of cards in Bob's hand and assured himself, "Okay, that's got to be a good play." Bane of the Living was unmorphed for 1 and Bob saved his Craghorn and Blade Sliver with his two Goblins and Darwin was left with no attack. He played a Shepherd of Rot and sent it back to Bob.

Bob swung into Bane and Akroma's Devoted with Blade Sliver and battering Craghorn. Darwin decided to trade his Bane for the sliver and took three from the beast—falling to 12. Bob played a Soulless one that hit play as a 3/3. The YMG'er played a Daunting Defender. Goblin Turncoat joined Bob's team but it was staring to look grim for his B/R deck. Things looked very grim indeed when Darwin played a second Daunting Defender, but he chose not to attack with his non-tap-to-attack clerics despite the inability of Bob to muster anything even resembling a reasonable block.

Bob had nothing and just sent it back to Darwin who still refused to attack with his nigh invulnerable Daunting Defenders. Two face-up Daru Healers joined the team and Darwin was content to sit back and wait for evasion creatures. That came next turn in the form of Celestial Gatekeeper. Darwin started nibbling away for two a turn and eventually played a Whipgrass Entangler that would have put Bob out of his misery if he didn't kill it with Skinthinner.

Vile Deacon joined the team—potentially a 9/9-doesn't-tap-to-attack monster—and Bob was able to cycle a Gempalm Polluter to find an answer. He managed to get Darwin to 7 in the process but any hope of climbing back in withered away when Darwin played an Ancestor's Prophet and used it to gain 10 a turn.

Despite a number of misplays and overly cautious non-attacks with his Daunting Defenders, Darwin was feeling pretty good about himself, "that was one of the cooler games of Limited I have played in a long time."

"Forgive me if I don't share the sentiment," said Bob shaking his head. 'I could have arranged my deck AND drawn two cards a turn and I still don't think I could have busted through. That amount of protection really puts it to R/B. Somehow I have a sneaking suspicion that Bane is the only non-cleric in that deck."

"You know," offered Darwin, "I didn't realize how good he was until after I drafted him. He started out as a counter draft."

"What a turn two play," complained a visibly aggravated Bob when he played a Goblin Sledder. Darwin's turn two play was a Shepherd of Rot that was killed by Bob's cycled Gempalm Incinerator. Bob's third land was a Forgotten Cave and that would be it for the next few turns. He played a Blade Sliver, which traded in combat with a Whipgrass Entangler when Darwin double blocked with it and an Akroma's Devoted. 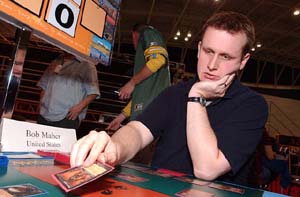 While Bob stalled on three land for two turns , Darwin just kept playing lands and creatures. 'God you peel lands so much better than I do!" Bob cycled into lands when Darwin played a Shepherd of Rot and a morph—Solar Blast took down the Zombie. Soulless One and Nantuko Husk joined the party but Bob had no attacks thanks to Shieldmage Elder.

"MMmmmmmm.... That is exactly what I wanted to draw here!" proclaimed Darwin as he enchanted his morph with Crown of Awe and revealed it to be Cabal Executioner. Despite having zero cards in hand to Bob's five, the game was all Darwin from here on out. Bob could not find a morph to hold back the pro-red and black cleric, which did not tap to attack and he was losing a guy each turn.

To make matters worse for Bob, Darwin got a Starlight Invoker into play with eight mana. Bob was taking two and losing a guy each turn while Darwin was gaining five and building up an impenetrable defense.

Darwin finally finished him off with a Profane Prayers for six but the game was over long before that.

I asked Darwin about failing to press his advantage in the first game with his Daunting Defenders. He explained that he had never drafted the cleric archetype before and didn't fully understand how to play it. He was scared that the only way he could lose was to make a mistake. In retrospect he admits that fear may have ultimately caused him to make mistakes instead.