Round 1: Eivind Nitter vs. Mattias Jorstedt 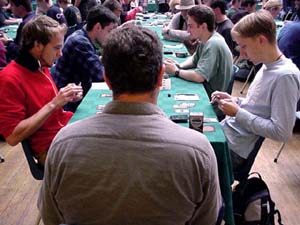 The 2001 European Champion sat across from Swedish Mattias Jorstedt, who finished fifth in the 1999 European Championship. Both players seemed rather relaxed as they started their first match on Day 1.

Both players had islands in play, and Mattias gained a small advantage through card drawing in the form of Carefull Study with a Hapless Researcher starting to do some damage—Eivind had no permanents besides lands. Eivind played a third turn Cephalid Constable. This did not impress Mattias, who repeated the attack and then casted Skywing Aven, passing on the turn to Eivind.

Now the Constable on Eivind's side got a little more powered up with a Psionic Gift, which he immediately activated. He hesitated for a second, than took the obvious choice and killed the Aven.

Over the next turns Phantom Centaur strengthened Eivind's groundforce while Mattias built out his with three NomadSentries. In a bold Norwegian attack, all three Sentries were sent to the graveyard, whereas Eivind only lost his Harvester Druid. Mattias filled his then empty play zone up with an Aven Fisher. Control stayed in Eivind's hands as he Scrivened back a Sudden Strength. With such overwhelming strenght Mattias decided it would be wiser to go to the second game.

Mattias decided to start the second game, playing island/go. As Eivind played an island too, Mattias casted Peek, revealing two Forests, Chainer's Edict, Seton's Scout, Nantuko Disciple, Mental Note and Scrivener. Both players made mental notes of their own and Mattias continued to dig deeper into his library with a Careful Study, casting Hapless Researcher.

On his next turn Mattias again bluffed his Hapless Researcher passed a 2/1 blocker, this time a Seton's Scout. Mattias played only a plains, passing the turn. Eivind kept looking for answers too, but was forced to discard at the end of his third turn.

A Treetop Sentinel appearing on Mattias' side looked like trouble in paradise for Eivind's mainly green force.

Next two turns Mattias built out a flying armada which could cause even more trouble, as Battlewise Aven got followed up by Aven Fisher. The current European Champion thought for a while on his fifth turn, a Scrivener waiting in his hands to join the line of defense, which was made up of Seton's Scout and Nantuko Disciple. It's this powerful combo that kept Mattias from attacking full force, attacking only with his Treetop Sentinel.

Eivind fearlessly sent in his Nantuko Disciple and it found no resistance as Mattias was aware of possible danger from Sudden Strength. Eivind cast Chainer's Edict and the Hapless Researcher on Mattias' side found a new purpose. As Mattias 'requested permisson' to play Stupifying Touch on Seton's Scout he attacked with his three flyers. Battlewise Aven found only five cards in the graveyard so it wasn't big enough yet. 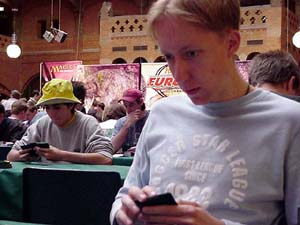 Decisive blocking on Eivind's part wasn't enough and Mattias lost no creatures as the Scout died. Eivind found himself on a downside and Deep Analysed for answers. Which he found in the shape of Sickening Dreams for three, causing all of Mattias' creatures to die, leaving Eivind with a self-saving Nantuko Disciple. Mattias cast a Hallowed Healer trying to buy him some time but the Healer found itself outnumbered as Eivind played Scrivener and Harvester Druid. He then cast Mental Note and the next turn killed the Healer with a flashbacked Chainer's Edict.

For a while things go back and forth as both players played some small creatures, but the Disciple always had the better hand in the matter, putting Mattias on a constant downside.

A Hydromorph Guardian ended up being Syncopated by Mattias as he decided there was enough pressure on the board already, but Eivind's draws enabled him to insist on attacking. When Amugaba showed up on his side, it was clear Mattias needed better answers than Hapless Researcher and Skywing Aven. At one life and with one blocker in play he shook hands with last year's European Champion.