Round 1: Eugene Harvey vs. Eric Froehlich 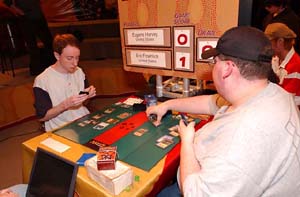 U.S. national champion Eugene Harvey had to be feeling the pressure when he sat down for round 1 of Worlds. A year ago he was also on the U.S. team, but he was a relative unknown and no one was expecting anything special from him. Sure the U.S. team was expected to win, and they did, but that pressure was nothing compared to this year. This time around, Harvey is the team captain and the only well-known name amongst the three of them. To make things even tougher, the Dutch are fielding one of the most star-studded national teams of all time. And some guy named Kai Budde is anchoring the German team.

With all these thoughts no doubt swirling around in his head, Harvey was forced to take on arguably the best American competitor playing these days. Eric Froehlich is one of very few Americans who can claim to be playing as well or better than Harvey this season. He also had a great playtesting team for this event ("Mini-Colony") that included Brian Kibler, Ben Rubin, and Brian Hegstad living with him plus Kai Budde chiming in technology from across the ocean. There would be no scrub from an obscure national team allowing Harvey to ease into the challenge of carrying history and expectations on his slim shoulders...

Both players dropped first turn Llanowar Elves off of painlands. Harvey's painland of choice was a Yavimaya Coast, so Froehlich knew right away that Harvey was running essentially the same Opposition deck that had carried him to the title in Orlando two months ago. Froehlich's first land was a bit more confusing – Karplusan Forest. He then followed up with a basic Plains and an Anurid Brushhopper. Lo and behold the Magic Colony is running a fairly innovative and brand new archetype. Their Judgment fueled design features both rare incarnations (Genesis and Glory) and Living Wish along with Sylvan Safekeeper, Phantom Centaur and even Phantom Nishoba, among others, in the sideboard. Meanwhile, it's got aggressive creatures from red, green, and white along with the ubiquitous Fire and Flametongue Kavu. They've tuned "Red Zone 2k2" against all the expected deck types and they think they're ready to surprise the world. 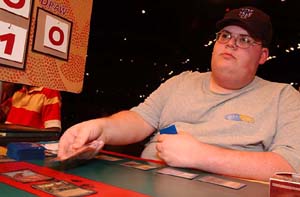 Harvey played a turn 2 Wild Mongrel (and a second Elf), but Froehlich was ready with turn 3 Flametongue Kavu. Harvey took two from his painlands to drop Opposition and braced himself to take 8 damage from Froehlich's creatures. His plan was to untap with two Elves in play to fuel that Opposition, but Froehlich had other ideas. One Fire dropped Harvey down to zero creatures in play and he promptly scooped up his now useless Opposition and started shuffling up for game 2.

Froehlich had to mulligan before game 1 and his new draw had just one land. On the other side, Harvey also had just one land, but he did have an Elf and he was able to burn a pair of Ices, locking down Froehlich's lone land while Harvey dug into his library. Harvey found a Bird and a Looter, but Froehlich found a second land just in time to fire off a Fire before the game got out of hand. Harvey dropped Squirrel Nest, but Froehlich all that really did was give Froehlich a chance to show off: Living Wish fetched Thunderscape Battlemage from the sideboard and the Nest only got to produce one squirrel. Harvey had a second Looter by this point, and with that up and running he simply never ran out of gas. Quiet Speculation – a new addition to Harvey's deck – put three copies of Roar of the Wurm into Harvey's graveyard and Froehlich could do little but sigh "right ..." Froehlich's used Reprisal (yes – it is in 7th Edition) to take care of one Wurm, but he soon died to the second and they were on to game 3.

4 Call of the Herd 3 Living Wish