Round 1: Extended Picks Up With Affinity

Ruel enters this weekend as the frontrunner in the Player of the Year race. With one Pro Tour and Worlds left in the season, he has a three-point lead over Gadiel Szleifer and Masashi Oiso, and this year the Top 10 is officially crowded, with only ten points separating the first six players on the list the title is anyone's to win. 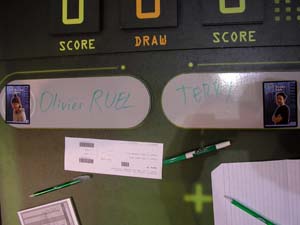 A quick exchange of player cards was a prelude to a quick match.

Sitting across from Ruel is none other than Terry Soh, the young Malaysian who exploded onto the Magic scene last year at Worlds and managed to defeat Tsuyoshi Fujita in the finals of the Magic Invitational, thus ensuring that his face will be immortalized on a Magic card.

The players began the match by trading player cards of themselves for their personal collections. Ruel then attempted an intimidation tactic by mixing them up and saying, "Choose the one with high lifetime earnings" to figure out who was going first. Soh correctly picked the Ruel card, allowing Olivier to preen briefly over his success -- before frowning at the fact that he would be going second in an Affinity mirror match. It's not a full mirror, however, since Ruel's deck has Erayo in it to give him more of a combo element.

Soh kicked things off with Seat of the Synod, Ornithopter, and . Olivier high-fived him on his turn after laying a Darksteel Citadel, congratulating the Malaysian Sensation on his choice of deck. Terrarion and Frogmite followed for Soh, while Ruel lagged a bit with Arcbound Worker and Talisman of Dominance. 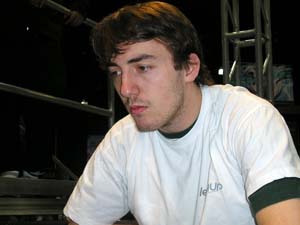 Soh's next turn brought five extra cards to his hand via his draw, Terrarion, the Sphere, and a Thoughtcast. Before using the two-mana artifacts, however, he locked in his affinity costs and cast a Somber Hoverguard as well. Ruel drew only one card on his turn, but his plays were just as significant, casting an Arcbound Ravager and Myr Enforcer before passing the turn.

Soh cast and equipped the battle helmet on turn four, using the Plating to halve Ruel's life total, dropping him to nine. Ruel cast Thoughtcast on his own turn, drawing and playing another Ravager and Enforcer, before sending his men into the red zone. Soh took a long time to work out the combat math, taking two from a Ravager and his proletariat friend, while losing a Frogmite to Ruel's Enforcer.

Terry cast Pithing Needle on his turn, and Ruel was forced to respond by turning his Blinkmoth Nexus into a creature and then adding a counter to it via stupid Ravager tricks before the Needle named Nexus. Soh had the trump for this play, casting an Arcbound Ravager and two more artifacts before combat, then attacking with his team for nine. 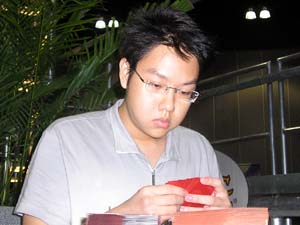 Olivier's combo elements showed up in Game 2, throwing down an Underground River on turn three before casting the Soratami Ascendant and a Cranial Plating. Electrostatic Bolt from Soh killed Erayo before he got a chance to become truly obnoxious, but Soh was color-screwed and mana-screwed, while Ruel had a robotic army reminiscent of bad Will Smith movies based on Isaac Asimov books. Rumors as to whether or not Olivier sports a mechanical arm have yet to be denied.

In the last game, both players got off to a quick, yet not explosive start, but Ruel had both Ravager and Plating superiority. This, plus a pair of Thoughtcasts gave the Frenchman more than enough gas to overcome a series of Myr Enforcers from Soh.

There were three games played in the match, but not a single one was really competitive.