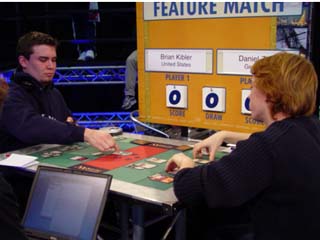 World Champion Daniel Zink sat down to his first round match against dragonmaster Brian Kibler (snug in his custom Battle School hoodie) under the watchful gaze of Zink's uncannily identical brother Sebastian. Both he and Kibler had drafted white, but Kibler's deck was predominantly green, while Zink went into red.

Kibler kicked things off with an Auriok Transfixer that was ambushed by Zink's Raise the Alarm. Zink then Shattered Kibler's Gold Myr and swung in with a hasty Vulshok Berserker. Kibler's Viridian Joiner let him speed into a Fangren Hunter, stopping Zink's assault.

Zink took to the air with Skyhunter Patrol while Kibler got in with his Hunter and made a Tel-Jilad Chosen. Zink shrugged slightly as he tapped Kibler's men with his Blinding Beam, entwining it to keep them locked down. Kibler accepted his six points of beats briskly and nodded as Zink made a Pyrite Spellbomb. He untapped and cast a second Chosen and Transfixer to stand in the way. Zink charged, trading his token and Berserker for Kibler's fresh men. Kibler fell to eight from the Skyhunter. Zink cast a Hematite Golem and held his ground.

Kibler swung in with his Chosen and Hunter, bringing Zink to ten. Zink could only hit in the air, and his position continued to dwindle. Soon Kibler was showing him a Blinding Beam of his own, taking the first game.

Zink chose to play and led off with Viridian Longbow. Kibler made a Myr and asked if Zink had Raise the Alarm again. Zink could only chuckle. He made a Krark-Clan Grunt and gave it back. Kibler busted him with Deconstruct on the Longbow into Cathodian. Zink dropped a Grand Furnace and Hematite Golem, then swung in with his Grunt. Kibler put the Cathodion in the way, and after Zink sacrificed his Furnace, tapped the Gold Myr to put Awe Strike on the table. 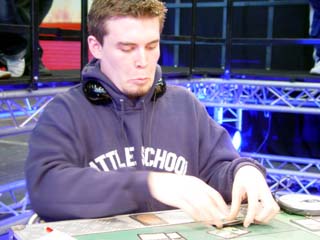 Kibler untapped and dropped Transfixer and Chosen on the table. Soon he'd be able to get around the Golem. He only scored one hit, though, before Granite Shard showed up to off the Gold Myr, Kibler's only source of white mana. His Soldier Replica looked almost sad.

Two turns later he'd found a plains and the Skyhunter had to stay home. While Kibler made small monsters Zink waited. He made a Myr Enforcer. Kibler tapped low and Zink took the opportunity to hit with his Patrol. It was time for Kibler to Beam him. Zink did have Raise the Alarm, though, taking down a Chosen and chumping a Cathodion. Zink untapped his lands and took another drubbing. Then he passed his turn with his defenses up and a card in hand.

Kibler announced his attack phase, fearing that Zink had ripped Blinding Beam. When Zink had no effects, Kibler played it safe and keeps his men home. Fangren Hunter joined his force. Zink untapped gingerly, and decided he needed to stay on defense as well. Kibler did nothing but add an Elf Replica to the table, while Zink continued to ping with his Shard. The clock was ticking. Shatter cut down Kibler's Cathodion, and he burned for two after sinking a mana into his Troll. Then Altar's Light cleared out Kibler's Soldier Replica, and the Patrol was free to start attacking. Bottle Gnomes gave Kibler an extra turn, but he soon scooped.

This time it was Kibler's turn to have the Raise the Alarm, and he got in for two before adding the mighty Slith Ascendant to the table. Zink made a Soldier Replica and watched as Kibler soared over. Kibler made a Cathodian and passed it back. Zink played an Auriok Bladewarden and waited with Replica mana open. Kibler sent his Cathodian. Zink wasted no time in Shattering it.

Now Zink tapped out for a Myr Enforcer, allowing Kibler's Slith to grow to a 3/3. He added a Transfixer and a Bottle Gnomes to his Squad. Zink untapped and played a Berserker, but Kibler's Blinding Beam kept him from attacking. Kibler untapped, tapped the Soldier Replica and swung in with his crew. Zink put the Bladewarden in front of one of the tokens and took the rest. Kibler stepped away from the table to confer with a judge, then returned and agreed to stack damage. Zink, as expected, threw his Soldier Replica at the Slith. Kibler showed him Awe Strike, to which a perplexed Zink asked "Targetting?" 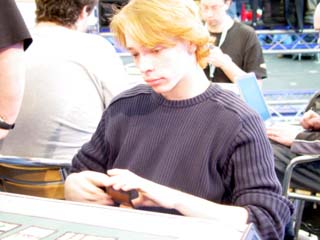 Immediately, the judge informed Kibler that he'd made a mistake. Kibler had asked him about this very situation, and been assured that he could target the no-longer-in-play Replica. The Head Judge ruled that Kibler would pick up his Awe Strike and untap his mana. Fortunately for Kibler he had Predator's Strike also, and saved the Slith that way.

Zink was demoralised. He had nothing to deal with the now 4/4 Slith. He tapped out for Soldier Replica and a Granite Shard, but two attacks later he was dead.