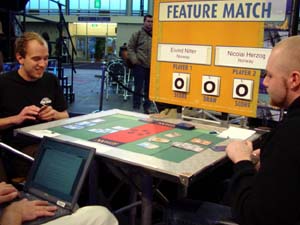 of these European competitors needs much in the way of introduction. Nicolai Herzog made the finals of the last Rochester draft Pro Tour, losing only to Kai. He's been playing (and finishing highly) in Pro Tours for longer than I can remember. Eivind Nitter, rock star of the Pro Tour, was once quoted as saying that he was going to use his winnings from Pro Tour Nice to buy a new wardrobe. Today he seemed a little more subdued than his usual self.

The table judge walked up to put up the nametags. "Are you…Nitter?" he jokingly said to Nicolai. "Haha," came the droll reply. "You wish," added Eivind.

When asked which player had the better deck, Nicolai pondered and then responded, "I think I do, honestly. He drafted all-out affinity, with Frogmites and all that, so it's kind of tough to tell how it worked out. But I know he doesn't have any power cards." Nitter pointed out that that's not really the point of the archetype, and Herzog agreed. He had picked up an early Spikeshot Goblin after Pierre Malherbaud took Reiver Demon over it, and never looked back, drafting Blue/Red with a splash of White.

Herzog won the die roll and chose to play. He immediately decided to keep his hand. Nitter, on the other hand, thought for quite awhile. Nicolai offered some sage advice: "Got to aggressively mulligan with affinity." This seemed to convince Nitter, who threw it back. He picked up his six and saw Tree of Tales, Leonin Scimitar, Frogmite, Mindstorm Crown, and two basic lands. He kept.

The early game commenced with Nitter playing out both Scimitar and Frogmite and Herzog putting a Yotian Soldier in the way. A second Scimitar showed up, however, and the Frogmite hopped into the red zone brandishing both swords, taking Herzog to 16.

Herzog returned the favor for one, played a fourth land, and then laid down a bomb in the form of Crystal Shard. Frogmite returned home, only to come back down on the next turn for free. It picked up both of its swords and stood guard. Herzog's only play was to add a Banshee's Blade and then equip it on the Soldier, leaving an Island open for his Shard.

Frogmite entered the red zone again and Herzog had a rules question: if he blocked with his Yotian Soldier, put damage on the stack, and then returned it, would the Blade get a counter? The ruling was that it wouldn't, so he didn't block and simply fell to twelve. Nitter had no other action and passed the turn. The Soldier attacked, adding a counter to the Blade, and Tooth of Chiss-Goria came down for some additional pain.

Nitter then played his first source of red mana, a Mountain off the top, and placed down a Goblin Striker, which embarrassingly had to stay back. Nicolai, now with seven lands, played Viridian Longbow and equipped it on his Yotian Soldier, then sent the 2/5 pinger into the red zone. Nitter chumped with his Striker. He drew, thought, and eventually passed the turn. Frustratingly, a useless Terror was keeping Nitter from emptying his hand so that he could put his Mindstorm Crown to good use.

Herzog's soldier lumbered into the red zone unblocked. He began to put a coin on his Blade, but then immediately took it off and wanted to use the Tooth for an extra point. The judge stepped in and ruled that the action of putting a coin meant that he had started resolving the triggered effect, so damage had already been dealt.

A turn later, Herzog had added yet another counter to his Blade, bringing the Soldier up to 6/9, and played out a Spikeshot Goblin. Nitter drew, made a face, and simply scooped up his cards.

Nitter chose to play and both players kept their hands. He was first on the board with a turn two Goblin Striker which got in there for a quick point. Herzog had a more convention turn two play: Silver Myr. Nitter, with no artifact lands, simply added Goblin Replica and attacked for one more.

Herzog played his third land and Wizard Replica, with Silver Myr available to generate the necessary mana for its ability. With no lands in his hand, Nitter drew a fairly useless Mindstorm Crown and could only play a 2/1 Nim Lasher. Herzog then added Neurok Spy and a menacing Banshee's Blade.

Still with no fourth land, Nitter chose to play around Wizard Replica by using Terror to kill the Spy while Herzog was still tapped out. He pondered attacking, but decided the three damage wasn't worth losing a creature. "Go."

Nicolai resolved a Thirst for Knowledge and pitched his other copy of Banshee's Blade, then played a Mountain. He moved the first Blade on to his Silver Myr and was done. Nitter drew Frogmite and played it for the steep cost of three mana. The rest of his hand was Betrayal of Flesh, Vermiculos, Mindstorm Crown, and Nim Shrieker. Not terribly strong with only three lands.

Herzog moved Banshee's Blade on to Wizard Replica and it attacked to add a counter. He used his other four mana to play out a vanilla Taj-Nar Swordsmith, commenting, "He's bigger than his whole team." 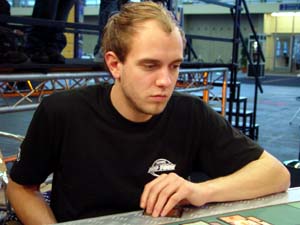 Nitter drew a second Frogmite and played it, then sent in his 4/1 Lasher. Silver Myr declined to step in front, so the score moved to 19 to 14. Wizard Replica returned the favor and grew to 3/5. Herzog added a Viridian Longbow, equipped it on the Swordsmith, then played Aether Spellbomb and cracked it to return the Goblin Replica. Nitter could only suicide his Nim Lasher by sending it to die and replay the Replica, still on three lands.

Herzog used two of his creatures and the Longbow to kill the Replica, then played Spikeshot Goblin, seemingly in firm control of the game. Finally, Nitter found a fourth land. He played it, but after a moment spent thinking about how difficult it would be to recover from this board position with cards like Vermiculos, preferred to concede.