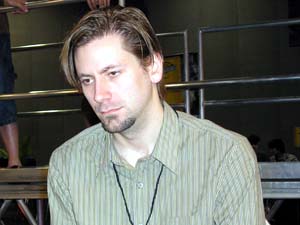 to the professional Magic scene might not recognize the name Brian Hacker, but back when the game was played with cave paintings, Hacker was one of the best. He's often called "The man who taught the world how to draft", and boasts Top 8's at Pro Tour - Dallas and Worlds 1998.

Nowadays Hacker makes a living as a game designer, building games instead of breaking them, but since the Pro Tour was coming so close he figured he'd try his hand at a qualifier. By his own admission he played badly, but a good sealed deck combined with his natural talents took him to the Top 8 draft. There he pulled himself together and walked away with an invitation. The Tour is glad to have him back. A nearby Gabe Walls summed up that feeling when he overheard spectators discussing Hacker's return to the Pro Tour.

He actually ambled over to get a good look at the man himself.

His opponent, Carlos Romao, isn't quite legendary, but there are few who fail to recognize the former World Champion. He's easy to pick out in a crowd with his intimidating stature and perennial smile.

He spent the beginning of this week at the Magic Invitational, where he finished third, just outside of the finals. Romao refused to be disappointed with his performance. Of course, the fact that the Invitational was held at E3 made sure that win or lose, he'd have a great time.

"If you like video games, E3 is paradise." - Carlos Romao

Hacker kicked off but let Romao get the first spell with Vedalken Engineer, since he was waiting on his Raise the Alarm. He untapped, hit for two, and then made a Skyhunter Cub. Fortunately for him Romao held no meaty artifacts, and had to content himself with a Neurok Spy. Hacker sent in the Cub. Romao shrugged and pushed the Spy forward to trade. Hacker replaced it with a Den-Guard.

Romao pulled a Myr Enforcer off the top, and with Tree of Tales and the Engineer he got it into play. Hacker was ready with Echoing Ruin and hit for three with his troops. Romao untapped and found another good one: Mask of Memory. He suited up his Engineer and hit for one, ditching a land. Hacker hit back for two, keeping his Den-Guard on defense. Despite his six land he added nothing to the board.

Romao wasted no time spending his six mana on a Nim Lasher and a Neurok Prodigy, sure to get out of hand with the Mask. Hacker hit for two more, and still had no play. The Prodigy hit for damage and cards. All Hacker could manage was a Nemesis Mask to punch through some damage and trade a token for the Lasher. Romao hit again.

Finally Hacker's deck decided to be kind and gave him an Arc-Slogger. He only had two mountains, though, and Romao had a Specter's Shroud to push Pewter Golem past it. Worse, the Mask of Memory gave Romao an Irradiate to seal the deal. After checking his top card, Hacker packed it in.

Romao was first off the blocks in the second game with Bonesplitter, Gold Myr and then Neurok Spy, while Hacker played four lands and did nothing. He did his best to make it seem like he had nothing up his sleeve, but no-one was surprised when he showed Romao Unforge, taking out Bonesplitter an the Myr that held it.

Hacker stemmed the Spy beats with Sun Droplet and then started some offense of his own with Megatog. Romao brought out a Goblin Dirigible, but Hacker was ready with Echoing Ruin, and Skyhunter Cub increased his clock. Romao battled back with Moriok Scavenger and a second Spy while Hacker played Shield of Kaldra with an embarrassed look.

"I'd appreciate it if this didn't end up in the coverage." - Brian Hacker

Romao hit back with his team and tapped all but a swamp for Goblin Dirigible. Hacker Shattered it at end of turn. He untapped and hit for five, leaving Romao at nine, and then played Yotian Soldier. Romao played out Chittering Rats and sent his Spies. Hacker untapped and started to think. After a couple of minutes he played Furnace Dragon and then ate all his artifacts, forcing Romao to chump-block with both his creatures. When a miracle card didn't show, they were on to Game 3.

Hacker had to send his first hand back in favor of a better six. He matched Romao's Gold Myr with Pteron Ghost and the two traded. Romao then added Neurok Spy and Moriok Scavenger to his team while Hacker's board was an anemic Wizard Replica and Nemesis Mask. Romao hit for two more and added Myr, Spellbomb and Arcbound Worker to the table. 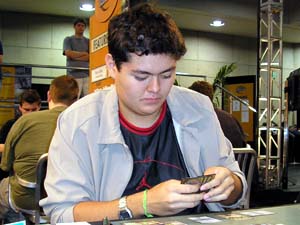 Hacker frowned and looked at his cards. He stemmed the beats somewhat with a Myr Enforcer thanks to Tree of Tales. The Spy continued to hit, and Romao had Pewter Golem next. That forced Hacker to Lure up his Enforcer and swing to take down the mighty regenerator before it could get online. He smashed up the Worker in the process. Romao was undaunted. Goblin Dirigible gave him more aggression. Hacker stared at a hand of Echoing Ruins and pleaded for a mountain. None came. Romao showed him another Spy, and Hacker extended the hand.

1 Raise the Alarm 1 Roar of the Kha 1 Shatter