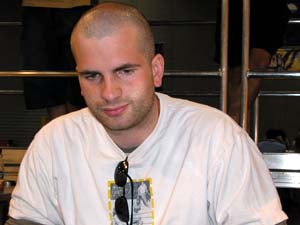 one of Pro Tour San Diego got underway with a bang. This round saw a match-up between the number two and number four players on the all-time money winners lists. Jon Finkel sits in second place with a staggering $290,000 in lifetime Magic winnings. Only Kai Budde is ahead of him. Kai's Phoenix Foundation teammate was his opponent this round. Dirk Baberowski is fourth on the money earner's list with just under $148,000 in winnings. Only Bob Maher separates the two on the list.

Jon and Dirk had already played a substantial amount of Magic this week. They were just back from E3, the site of the 2004 Magic Invitational, where they each played fifteen rounds of Magic. Jon was hoping for a more productive set of rounds as he finished dead last in the standings with a 3-12 record. Historically such a poor finish has almost always been followed by a Pro Tour win sometime over the course of the next season. Aside from that he was optimistic that his luck was about to change as he had drafted a deck that he was bragging about to Dirk as they wandered over to the feature match area.

Dirk fared better than Jon at the Invitational but was not pleased with his 8-7 showing. He was also less than pleased with his mono-black draft deck. He shook his head as Jon gloated about how well the draft went for him, "I hope you are kidding about your deck."

"Nope. It is really good. If I had made one different pick my deck would have been the nuts." Apparently Jon had an excellent opportunity to make a third pack switch into white when he opened the Morphlingesque Pristine Angel and had to watch as white card after white card passed through his hands including a fairly late pick Leonin Battlemage.

Dirk smiled when asked who won the match-up between the two of them earlier in the week at E3. "Well, since Jon didn't beat many people it's safe to say I won."

Dirk frowned at his opening hand that featured five lands, Disciple of the Vault, and Triskelion. "This isn't the hottest but I will keep it anyway." He opened on Disciple and had a second turn Liar's Pendulum. Jon's first play was an Iron Myr,

Dirk played a third Swamp and passed turn three with Pendulum gearing up for some action. Jon played a Talisman, and a Spikeshot Goblin. Dirk activated his artifact EOT naming Swamp. Jon flipped a coin to determine his answer and Dirk nodded in agreement, "That is what I do." Jon correctly guessed that he did have a Swamp. Dirk untapped and played Silver Myr and used Echoing Decay on the Spikeshot.

Jon cast an Arcbound Bruiser. Dirk had the Triskelion in play on the fifth turn and shot the opposing Myr--Jon lost one life to the Disciple and was left with only three Mountains and a Talisman to work with. Jon thought long and hard over his next turn and decided to ball the Triskelion. Dirk raised his eyebrows at the power card and Jon took three.

Dirk went to activate his Liar's Pendulum and then hesitated and flipped his own coin. He named Nim Shambler and after asking for the text on the Shambler Jon flipped a coin back. Jon won the coin battle and Dirk played the unimpressive Alpha Myr.

Jon Shattered the Pendulum and Dirk sighed as he played a Clockwork Condor, "More quality spells here." Meanwhile Jon had a Pewter Golem and then a Vulshok War Boar on the next turn. He sacrificed his Bruiser to make a 7/5 Golem. Dirk attacked for three in that air and Jon fell to six. After fortifying his defenses with a Frogmite Dirk smiled at his Disciple, "Is the little man going to kill you?"

Jon took his time calculating his next turn and finally just sent in his Golem to eat the Silver Myr. He fell to five but went back to seven when he Consume Spirited the Disciple for two. Dirk had no attack back and scooped a turn later when Jon kept him from an answer with a Chittering Rats.

"I don't have anything too good," frowned Dirk as he examined his sideboard. "This might be okay," he mused over a One Dozen Eyes and Deconstruct. Finally he just put in an Arcbound Hybrid with a shrug, "It's like I didn't even sideboard." Meanwhile Jon sided out a Scavenging Scarab and brought in a curious Omega Myr.

Dirk opened on a Spellbomb and cycled it promptly on turn two. He had a turn three Dross Golem. Jon played Chittering Rats. Jon leaned over to read the Tower of Eons that saw play on turn four. Jon's Rats got in for two and were joined by a Nim Replica. Dirk had a Frogmite and a frown on turn five--he seemed quite displeased with his deck and his draws.

Jon smoked the Golem with Consume Spirit and attacked with his two guys. Dirk traded the Frogmite for a Nim Replica and took two from the Rats. Jon was stalled at four lands while Dirk went right to six and played a Triskelion. It was Jon's turn to sigh as Dirk handed his creature a Vulshok Morningstar and attacked for five. Jon played a Mountain--he had only Swamps and a Stalking Stones to this point--and passed the turn. Dirk played a Hybrid and moved his Morningstar over. Jon Shattered the Trike and took one and lost his Rats to the Trike's ability. Jon used an Electrostatic Bolt on his turn to kill the 4/4 modular guy and played Pewter Golem.

Dirk's Nim Lasher came down and scooped up the Morningstar to become a 5/3. It stepped aside for the Pewter Golem and Jon had a slight edge in the damage race at eleven to ten. Dirk played a Nuisance Engine but Jon Shattered the Morningstar and Irradiated the Lasher EOT. Jon activated his Stalking Stones and bashed in with both men.

Dirk made a token and was able to play Myr Enforcer and Frogmite. Jon simply sent in the Golem and added a Vulshok War Boar. Dirk was at seven but a Whispersilk Cloak gave him a glimmer of hope. The Nuisance tokens kept the Pewter Golem occupied while Dirk marshaled his forces. He played a Clockwork Condor. When Jon attacked with his Golem, Dirk took it out with Echoing Decay. His Iron Myr and a land let him activate his Tower and the game went out of Jon's reach--even if he found the ball that Dirk had been dreading.

Dirk pulled a handful of Forests and One Dozen Eyes from his board and shuffled them into his deck. He decided not to also bring in Deconstruct against Jon's deck that mostly featured black and red cards--he had not yet seen Jon's Loxodon Warhammer. He quickly mulliganed his hand after Jon kept on the play--Jon was holding a creature, some lands and the heretofore-unseen Warhammer.

Jon opened on Mountain hopeful of an early Oxidda Golem. He played a Yotian Soldier into Dirk's Alpha Myr, "That guy is better than my deck," frowned the German who followed with a Nim Lasher. Jon had a fourth turn Scavenging Scarab that he had sided back in on the play, which earned a laugh from Dirk, "Some would say that guy is not the hottest."

He reappraised the card when Jon sent it in wielding a shrieker, "He is pretty good now." Dirk played a Nuisance Engine and when the Lasher came in Jon gladly traded his Soldier for it. Dirk made a token to chump the Scarab and Jon shattered the Engine. Dirk played a Grimclaw Bats.

Jon played land number six and dropped the Hammer on the German. He quickly threw all his eggs in the basket and attacked with his doubly equipped Scarab. Dirk paused, "I'm trying to think if I am drawing dead here."

"You said he wasn't very god," chided Jon as he nudged his Scarab into the red zone.

"He is awesome." Dirk fell to two and Jon went to thirty-two. 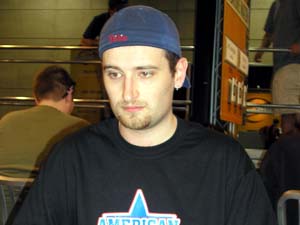 Dirk played a Triskelion and Gabe Walls exclaimed, "How lucky." Dirk had been holding the Triskelion last turn but had to play and cycle a to find the sixth land. "Lucky would have been drawing the land instead of the Sphere last turn.

Jon played Oxidda Golem and moved his shrieker over to his hasty golem. While Jon calculated how best to play the turn Dirk leaned over an confided, "I actually have no outs. I am just curious to see what he does." Jon attacked. Dirk killed the Scarab and chumped the Golem. The top of his deck yielded a Forest and he scooped.