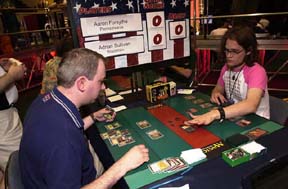 Adrian Sullivan is comparable to a traveling circus. His flamboyant personality and penchant for rogue decks make him a player that people want to watch. He was matched up against Pro Tour good guy Aaron Forsythe. The two sat next to each other for the draft, in fourth and fifth seats.

After the people ahead of him chose Thornscape Apprentice, Sleeper's Robe and Tower Drake respectively, Forsythe was faced with the choice of Llanowar Knight or Hooded Kavu. If the previous picks were a reliable indication, both of those combinations were going to bear fruit. Forsythe took the Knight and Sullivan gladly snagged the Hooded Kavu.

After that, their drafts went in tandem for a few picks, with Forsythe taking bears and Sullivan getting quality creatures of his own, notably Skizzik. Forsythe took a Demise when he cracked his pack, a fine splash in a green-white deck, but found his primary colors fading. He started into red with Zap and Kavu Scout. This did little to stunt Sullivan's deck. He was collecting cards like Tribal Flames, Exotic Curse and Blazing Specter. Forsythe did take a late Hooded Kavu from Sullivan in the eighth pack.

The absence of a ridiculous flow of bears forced Forsythe to look to Serpentine Kavus to fill out his deck, taking away its early game. The second set of packs was nuts for Sullivan, delivering three Soul Burns. Planeshift was more of the same, with Forsythe getting some good and bad, and Sullivan finding the goods.

Sullivan was excited about the power of his deck. He went into the draft expecting to draft a much lower curve, with lots of one-drops and creature enhancers, but the quality cards were too good to pass up. Forsythe was naturally dismayed, seeing the black-red he was handing to Sullivan and ending up with a lesser deck as a result. The two headed to the feature match area, shuffled up, and began. 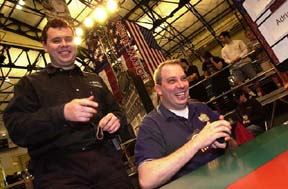 Sullivan was delighted with his opening hand. Forsythe, less so. He went to six. Sullivan blazed the table with Thunderscape Apprentice and Hate Weaver, but Forsythe's bear line was at the ready, and a Llanowar Knight held Sullivan up. Ravenous Rats took a Singe from Forsythe. He retorted with a Thornscape Familiar, a Zap for the Weaver and a second Knight. When the Rats traded for the Familiar, the board looked to be in Forsythe's favor.

His spending his resources on Sullivan's black creatures seemed less spectacular when his opponent played Urborg Shambler. He came across with one of the Knights and kicked up a Lancer. Sullivan answered with Soul Burn. He also tried to take out a Knight with Tribal Flames, but Forsythe had mana ready this time, and saved it with Pollen Remedy.

Now the two were racing: Forsythe's two Knights against Sullivan's Shambler and Apprentice. A Gerrard's Command put Forsythe way out front, but it turned out not to be enough. Sullivan had a pair of Soul Burns aimed at Forsythe's head.

Things were not going Forsythe's way in Game 2. He was without forests for the first five turns, and the only spell he played was a Zap on Sullivan's Thunderscape Apprentice. Sullivan played his head like a bongo drum, sending with Hooded and Caldera Kavu and dropping him to six in short order. 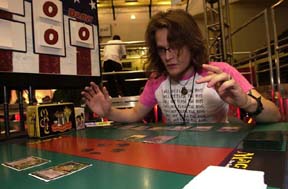 Finally he drew into Rith's Grove to power up a Fertile Ground, which in turn busted out Pincer Spider. Sullivan threw on the hood and sent both creatures. Forsythe's best surprise was a Singe to take down the Hooded Kavu. Said Forsythe, "I'm pretty sure this isn't going to help me.", and he was right. Sullivan had Terminate in reserve. Facing lethal damage, all Forsythe could muster was the sentence "Aw, I thought I was in it, too."

Afterwards he repeated his regret over not taking the Hooded Kavu as his first pick. At the time, he felt the Knight was the right choice, but in retrospect the Kavu would have handed him the better deck. Sullivan agreed, and offered sympathy over the disastrous Game 2. He collected Lucky Penny and Lucky Pen, the latter now 20-2-1 in major event matches and strode off.