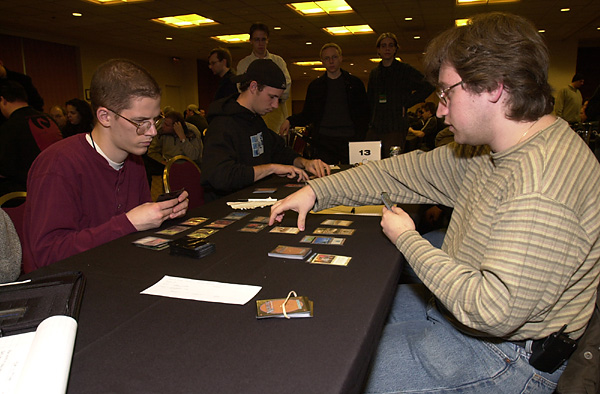 Andrew Cuneo, from Pittsburgh, was most recently on the Car Acrobatic Team that took second at PTNY faced off against the Sideboard's Alex Shvartsman, from New York City, who is best known as a Grand Prix miser. Shvartsman, coming off of a recent trip to the Magic Invitational, is hungry for a big money win. Cuneo, who fought his way through the Gateway tournament, is all about picking up a win.

Andrew and Alex sat next to each other at table four during the draft, Alex to Andrew's right. While both took a blue first pick (Alex Distorting Wake, Andrew Repulse), and Alex passed Andrew a Samite Archer, Mr. Cuneo soon found himself shut out of blue and looking at solid late green including Aggressive Urge, Nomadic Elf, Fires of Yavimaya, and Harrow. With a second pack opening Breath of Darigaaz and a Kavu Chameleon in packs two and three, Andrew found his home in red/green, using green's mana-splashers to work in Repulse, Samite Archer, and Shackles (in retrospect, he felt the early high quality of blue kept him from drafting a third-pick Scorching Lava that may have helped his deck as he transitioned into red).

Alex, meanwhile, found blue a little lighter than he hoped, but still acquired enough (Stormscape Apprentice, Galina's Knight, Stand/Deliver, and second-third pack opens of Zanam Djinn and Blind Seer) to run a solid blue-white deck with a splash of black for Agonizing Demise and Recoil. Black did seem a bit underdrafted on this half of the table, with a fifth pick Stormscape Master second pack (going to Alex), and a third pack Cinder Shade strolling past both players as they chose third and fourth picks more suitable to their strategies.

Upon completion of deck construction, Alex swiftly judged his deck to be "average," with third pack black saving him. Andrew felt comfortable with his four-color strategy, given the high quality of green splash-style cards.

Both players were loose as geese. There was light but genuine banter between the two and good sportsmanship on both sides.

Alex won the roll and elected to play first. He dazzled Andrew with three straight land-go turns, while Mr. Cuneo tried to keep up by playing Thornscape Apprentice, Fertile Ground, and Aggressive Urge (attacking Apprentice) to start. Alex's first play on turn four was perhaps the most devastating: a Dismantling Blow to the Fertile Ground, which played prominently into Andrew's later color-screw.

Alex's offensive came in the form of a Glimmering Angel and Zanam Djinn for two straight turns, while Andrew's Thornscape Apprentice pleaded for white mana. A Pincer Spider, Shackles, and Harrow slowed the bleeding but came too late for Andrew, as Shvartsman eventually overwhelmed the defense with an assault both in air (Djinn, Angel) and on ground (kicked Benalish Lancer, Shoreline Raider, Riptide Crab).

Andrew elected to play first. The game started quietly with slow build-up until turn six, when Andrew cleared most of the board (carefully preserving his own Treefolk Healer) with a Breath of Darigaaz. Unfortunately for Andrew, Alex had a Zanam Djinn ready on his turn. With a Benalish Lancer and Shackles coming soon afterward, Alex overcame Andrew's spider-based defense and eventually forced his opponent to concede.