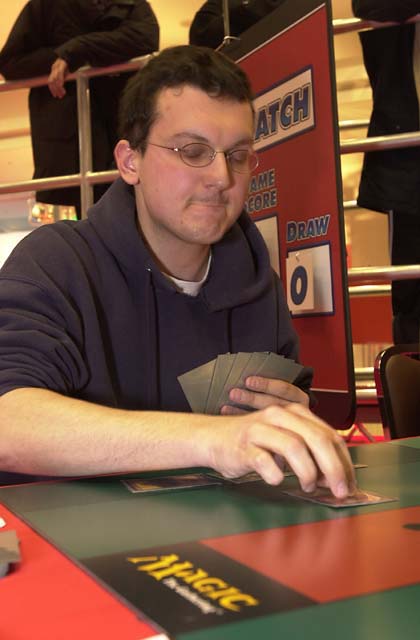 Ben sat down with his famous Superman t-shirt on ready to play. Raffaele was playing his friend Antonio DeRosa's Green/Red beatdown deck, which consisted of 2 casting cost creatures, Skizzik, and a few direct damage spells to clear the way for his creatures and finish off his opponent. Ben's deck is a mix between control and aggression, containing Ghitu Fire, Void and Urza's Rage, as well as Skizzik and Blazing Specter.

Ben won the flip and chose to play. He mulliganed his hand into two lands and a Nightscape Familiar. Ben drops a Nightscape Familiar turn 2, and Raffaele played a Yavimaya Barbarian on his turn and said go. Ben cast Ghitu Fire on the Barbarian and swung with his Nightscape Familiar for 1 mighty point of damage. He said go without playing his third land. Then Raffaele assaulted the Nightscape Familiar and played Thornscape Familiar. Ben cast another Ghitu Fire, clearing the Thornscape Familiar off the board and said go without playing a land for the second turn in a row. Raffaele played another Yavimaya Barbarian and Ben on his turn drew and said go without playing a land for the fourth turn in a row. Raffaele continued to capitalize on his opponent's mana deprivation by attacking and casting another Yavimaya Barbarian, his third this game. Ben missed his land drop for the fourth turn in a row and said go. At this point, Ben was way behind and needed to draw land for the next few turns in a row to be able to pull a win out. His deck is heavily land dependent, and needs at least 3 to 5 land to run. Raffaele attacked for 4, played a Kavu Titan without the kicker and said go. Ben finally drew a land, but it was an Urborg Volcano and came into play tapped. Raffaele then played a Raging Kavu and attacked with all his creatures putting Ben to 5 life. Ben said go again without playing anything, allowing Rafaelle to attack for the win on the next turn.

Both players reached for their sideboards. Raffaele showed his sideboard afterwards, he brought out his Yavimaya Barbarians, three Urza's Rage, and two Raging Kavus for Jade Leech, Shivan Wurm, and Ghitu Fire, which was surprisingly not in his main deck. His other teammates had chosen to play four Ghitu Fire in their main deck, believing the card to be one of the best in the format.

Ben piles his opponents deck out in five piles and then requests Mark Rosewater to check the deck. It appears some cards where upside down in the deck, but there was no pattern. 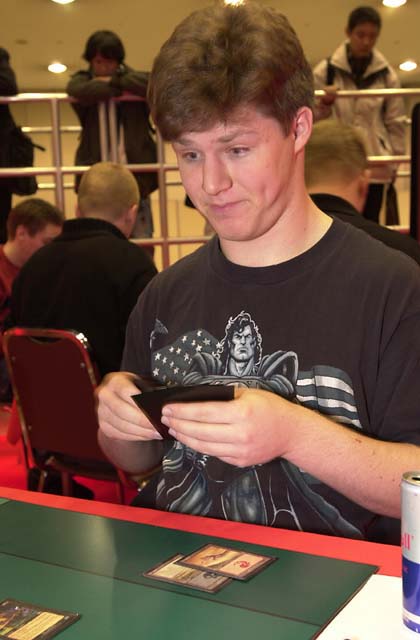 Ben played first and dropped a Mountain. Raffaele drops a Shivan Oasis and says go. Ben dropped a Swamp and a Nightscape Familiar. Raffaele played a Forest and a Thornscape Familiar. Ben attacked for one and attempted to cast Slay on the Thornscape Familiar with only 2 land. He realized he couldn't cast it and instead used the mana he had left for a Terminate. He then said go without playing a land on the third turn for the second game in a row. Raffaele played a Mountain, Thornscape Familiar, and a one point Ghitu Fire on Ben's Nightscape Familiar. Ben drew and played his third land, a Swamp, cast the Slay in his hand on the Thornscape Familiar and passed the turn. Raffaele played a mountain and a Jade Leech. Ben played a land and waited until his opponent untapped and attacked before casting his second Terminate on the Jade Leech. Raffaele played another land and another Jade Leech. Ben played a Swamp and cast Void for four killing the Jade Leech. Raffaele played a Kavu Titan with kicker. Ben played a Blazing Specter and attacked for two, knocking an Assault/Battery out of his opponent's hand, leaving Raffaele with no cards in hand. Raffaele drew and played Skizzik with the kicker and attacked for 10 points of damage, putting Ben to 10 life. Ben attacked for two and played a Void for 2, killing the Kavu Titan. Raffaele drew off the top, attacked with his Skizzik and putting Ben to 5 and cast Assault/Battery choosing to get the Battery token instead of killing the Blazing Specter. Ben untapped, drew and thought. He had 4 cards in hand, including Skizzik and Urza's Rage, five lands in play, and his opponent has 15 life. He passed the turn without attacking or casting spells. He most likely would have to chump block the token with the Blazing Specter and Urza's Rage the Skizzik. Raffaele draws his second Skizzik off the top and casts it with the kicker for the game.

Ben didn't talk about the match but was obviously disappointed with not enough drawing land both games. He missed his third land drop both times while playing against an aggressive deck and had his regenerating blocker burned away both games.