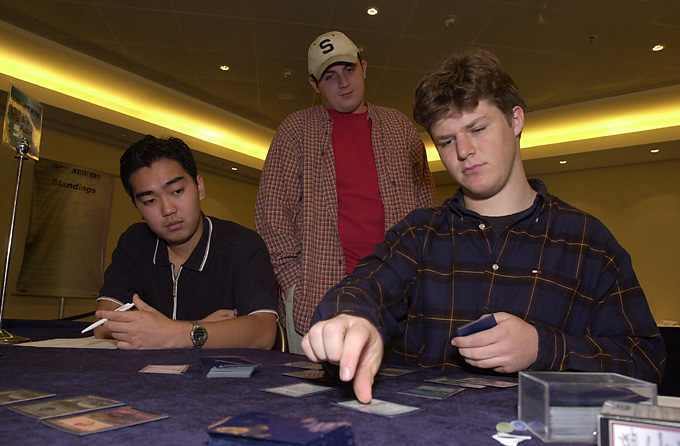 As the first round of the Duelist Invitational commenced, San Francisco's Ben Rubin, Grand Prix-Pittsburgh winner and 4th Highest Ranked Player faced off against Madison's Bob Maher, Jr, 2000 Pro Player of the Year and winner of Pro Tour- Chicago and Grand Prix- Seattle.

After winning the coin toss, Ben Rubin opted to draw. The early stages of the game saw little play until fourth turn with Bob's Survival of the Fittest, now 2GG. Ben responded with Winter Orb now 1 colorless. Effectively halted by the Winter Orb, Ben casted Mishra's War Machine, which was now 5 casting cost. Casting Rukh Egg but mistaking the casting cost, Bob had to wait another turn, while a War Machine was diminishing Bob's life. In answer to the War Machine Bob played Maro. Talking damage from the War Machine until Bob had enough cards to reach a 7/7 Maro. The War Machine was now 7/7 as well, thanks to a Hunting Moa. Choosing not to trade a 7/7 War Machine with a 7/7 Maro, Ben waited until an opportunity arose, discarding Tawno's Coffin, Tracker, Preacher and Iridescent Drake to War Machine.

The turning point of the game came when Ben played a Cloudchaser Eagle, destroying the Survival which has been unused the entire game. With a second creature to attack with and Bob now on 2 life, the game looked in Ben's favor. Until a timely Bone Shredder from Bob saw the game swing and a Maro beating commencing.

Having to block the 8/8 Maro with a 7/7 War Machine, an interesting rules question arose. Whether the Maro would die after the discard phrase as it would be 7/7. The quick answer from the judges was: the Maro lives. The first game then went to Bob with Maro being the kill card. 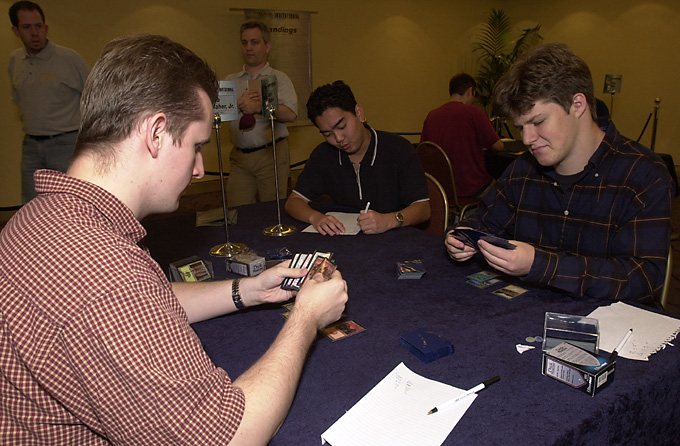 Game two saw a more interesting game. As usual no cards where played until fifth turn, with Bob casting a Hell's Caretaker which was Excluded. On Ben's turn a Winter Orb and a four casting cast Waterfront Bouncer saw play. Promptly followed by a four casting cost Devout Witness. With no immediate answer to the Winter Orb, Waterfront Bouncer creature lock, Bob only delayed the evitable with a Bone Shredder, while the Devout Witness had Bob on a clock. Curiosity added further security for Ben and a Maro on 16th turn saw the game in Ben corner.

Now with one game apiece, the deciding match was anyone's ball. Beginning with a third turn Kris Mage, followed by a fourth turn Deepwood Tantiv, Bob's game looked strong. However, cunningly waiting for his opportunity, Ben Rubin had an Exclude. Casting a Maro that was Excluded, Ben followed by a Maro of his own which was 6/6. In a blissful attempt to answer the Maro, Bob casted a Hell's Caretaker. Contemplating his options and the situation at hand, Ben cloned his Maro leaving two 5/5 monster stareing down Bob's Kris Mage, Deepwood Tantiv and Hell's Caretaker. Reviving the Maro with his Caretaker and casting a Rukh Egg, the game looked interesting if not compelling. Answering with a Swords to Plowshares on the Rukh Egg, which was costed at 5 mana and attacking with two 5/5 Maros, Ben had the game. Drawing his last card before conceding to two Maros and a Winter Orb, Bob commented on the Winter Orb, saying "I lost every game due to that card alone."