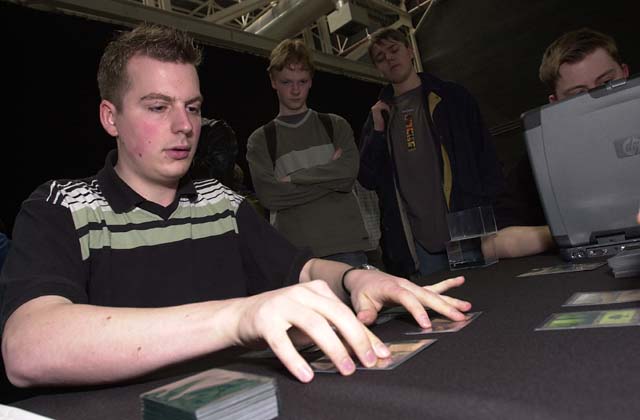 Ben Rubin and William 'Baby Huey' Jensen make a good team. They have won one Masters Series each so far, and no-one else has yet won one. Once again they were working together building decks for this one, and it was William who deferred this time, playing the deck "because Ben told me to." Ben claims that their deck, a Domain deck similar to the one they played in Tokyo, but with the important addition of Obliterate.

Kamiel has an amazing record on the Pro Tour this season, and he went with a blue-black deck, seemingly similar to that which Noah Boeken is also running in the Masters Series.

Ben had to mulligan at the start of the first game, with a hand rather heavy on spells. His second hand had only one Forest, and a Star Compass, but he kept it as he would be able to Harrow if he drew a second land. This was all well and good in theory, but he didn't draw the second land straight away, and the first play of the match was Kamiel's Nightscape Familiar.

Nevertheless, Ben drew land number two on his third turn, and played out his Star Compass. However, Kamiel used the mana-acceleration of his Familiar to Lobotomize Ben and caught him with Collective Restraint, Fact or Fiction, Obliterate, Reviving Vapors, and Harrow in hand. The Dutchman decided that with Ben stuck on a couple of lands, removing the Harrow and attempting to leave him mana-screwed was the way to go, since he has plenty of ways of dealing with Collective Restraint.

Ben needed to draw a blue mana to get going, and while he waited, Kamiel developed his hand with a Fact or Fiction and kept swinging in with the Nightscape Familiar. Kamiel played two more Nightscape Familiars as Ben was forced to sit there and just watch, unable to cast any of his spells, and Kamiel even Recoiled his Star Compass to keep Ben low on mana. When Ben replayed it, the Dutchman Undermined it, and two more attacks from the triumvirate of Nightscape Familiars finished the game.

Both players bring in Gainsay, and Kamiel added Disrupt as well to counteract the Harrows. Ben had Kavu Chameleon which was an amazing threat creature in this match, so Ben brought that in as well.

This time it was Ben with a good hand, and Kamiel who had to take a mulligan with only one Island in his opening hand. His second hand was better, but still not great. Ben only had two lands in his opening hand but got rid of any potential problem there by playing Elfhame Sanctuary.

Kamiel replied with a Nightscape Familiar, and Ben used the Sanctuary to get a Swamp that allowed him to cast the Plague Spitter in his hand. With his draw of two Kavu Chameleons, he was obviously thinking about going beatdown and wanted the Familiar off the board.

Kamiel didn't have a third land and so all he could do was regenerate the Familiar. Ben searched for his fourth land putting him one away from dropping Chameleons, and swung in with the Plague Spitter. Kamiel's third land allowed him to cast Fact or Fiction, at the expense of losing his Nightscape Familiar to the Spitter, and Ben divided the five cards into a pile of Ravenous Rats, land, and a pile of Probe, two lands. Kamiel took the Rat but it didn't seem big enough to deal with the Kavu Chameleon Ben summoned.

Kamiel had neither a Recoil nor a Repulse, and so the Chameleon and Spitter brought him down to seven. Rubin played a second Chameleon, Kamiel didn't have an answer and they moved onto the third game.

Kamiel's start of three Salt Marshes was rather slow, and he chose to keep his mana open rather than cast a Ravenous Rats on his third turn. This caused Ben not to Harrow for fear of a Disrupt, and Kamiel played the Rat on his fourth turn instead. Ben lapsed into a long think - nearly five minutes elapsed before he eventually discarded Elfhame Palace.

Rubin untapped and then cast his Harrow, as with only two mana open, Kamiel couldn't do anything to stop it from resolving. Cornelissen cast a Disrupt in the hope of drawing a second, but he didn't and the Harrow fetched an Island and a Plains.

Both players were being cagey, Kamiel didn't want to tap out in fear of potential Global Ruins or other such devastating spells, and Ben didn't want to get his good spells countered. Ben thought for a long time - his options were Kavu Chameleon, Global Ruin, and Questing Phelddagrif - he chose Kavu Chameleon, and Kamiel cast Fact or Fiction at the end of turn. Ben gave Kamiel the choice between Recoil and Island, or Lobotomy, Exclude, and Salt Marsh. The Dutchman took the bigger pile, and Kamiel cast Lobotomy.

This showed that Ben was holding both Global Ruin and Questing Phelddagrif, along with Kavu Chameleon and a pair of Spite/Malice. Kamiel thought for a while but it appeared that he had to take Phelddagrif since the Ruin would literally ruin him - he had three Salt Marshes and two Swamps in play. Alternatively, he could take the Phelddagrif and pray that Ben didn't draw a land - this was only possible if Kamiel held a Disrupt in his hand to counter the Global Ruin. 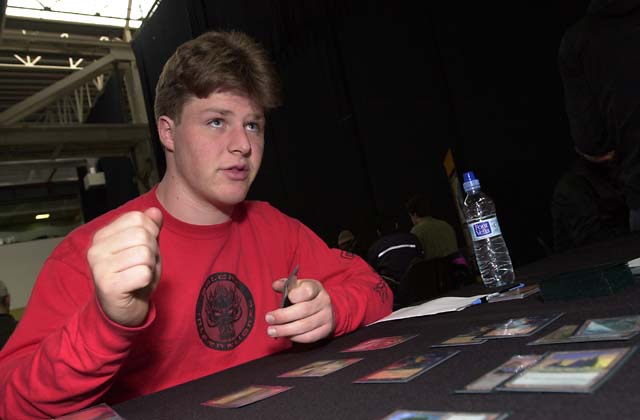 Global Ruin would reduce Ben to Island, Forest, Plains and he didn't have any land in hand, so perhaps this explained why Kamiel took the Phelddagrif. Cornelissen wisely didn't play the Salt Marsh in his hand, and Ben did not draw a land. He was faced with a dilemma - why would Kamiel have left him with Global Ruin in his hand if he did not have the Disrupt?

After thinking for a very long time, Rubin decided not to take his chances, and played the second Kavu Chameleon. This was hard enough in itself for Kamiel to deal with, so playing safe was probably the right thing to do - Kamiel was in fact bluffing the Disrupt, but had a good poker face. Cornelissen played a second Ravenous Rats. Ben discarded his Star Compass and swung with both Kavu Chameleons, which caused Kamiel to block with his Ravenous Rats.

With the beatdown on board, Ben didn't feel like running a gauntlet of Counterspells, and just passed the turn. Kamiel attempted to Recoil a Kavu Chameleon, but Rubin used Spite/Malice, since it was one of only a handful of spells in Kamiel's deck actually capable of dealing with the Kavu - along with Repulse and Nightscape Familiar, and only the Familiar is a decent permanent answer.

Kamiel played a Yawgmoth's Agenda leaving himself with only one mana open. This time Ben had drawn a Mountain and so the threat of Disrupt did not scare him. He cast the Global Ruin and reduced Kamiel to one Swamp. Two turns later the match was over.