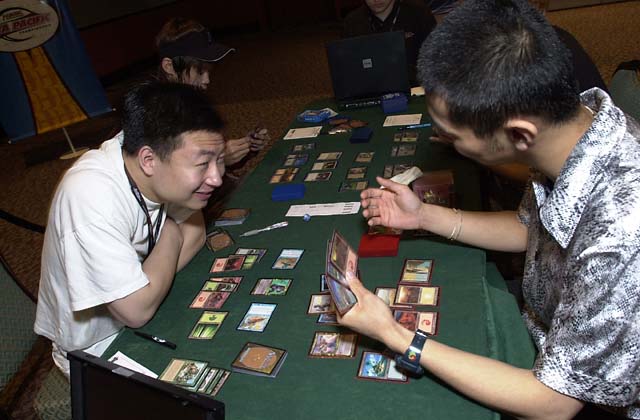 Practicing male model "The" Ben Seck was quick to strip off his sweatshirt to reveal a shirt from the new "Seck" line of clothing. Sporting his name on the front and "Ben Seck - That's all you need to know" on the back, it personified Seck's outgoing and confident nature. Fukata, who received an invitation from finishing in the Top 8 of Japanese Nationals, was a bit more subdued but seemed quietly confident and was obviously comfortable in the feature match area. Fukata is best known for being a Buddhist priest, while Ben is known on the Internet for this outgoing and friendly nature.

Fukata went second but came out strong with Stormscape Apprentice followed by Samite Pilgrim in the first two turns. Seck's second turn Dream Thrush wasn't quite as threatening, though it would certainly help solidify the mana base of his green-red-blue deck. He didn't need it however as he attacked for one and Harrowed on turn three to give him all his colors and four mana.

Fukata didn't have any mana problems either as he played Island, Plains, Mountain to start but had no turn three play. Seck predicted Exclude as Fukata attacked with the Apprentice despite having white mana open to tap the Dream Thrush and they both chuckled. The Dream Thrush continued to beatdown through the air and was joined by a Kavu Aggressor. Fukata's answering Sisay's Ingenuity was hardly threatening and Seck jovially pumped his fist that nothing worse followed.

By attacking with the Aggressor, Seck pushed Fukata into using the Stormscape Apprentice and being unable to Exclude the Living Airship. He tried to Lightning Dart the ship at the end of Seck's turn, but Seck kept it alive with a timely Explosive Growth.

Despite this setback, Fukata tapped out to play a Minotaur Illusionist to take control of the ground. Seck's force of birds and ships were still table to get through in the air as he solidified his own ground forces with a Horned Kavu, bouncing the less than useful Aggressor. A Lay of the Land for a mountain helped thin out his deck, though he wasn't able to match Fukata's perfect mix of two islands, two mountains and two plains on turn six.

Another Lay of the Land stalled Seck's semi-aggressive start, as the Stormscape Apprentice was able to hold back the Airship leaving only the Thrush attacking. But Fukata didn't seem to have many threats of his own as he continued to play lots of land and few spells. Despite Seck predicting Jilt as he flexed his muscles for WotC photographers and fans alike, Fukata passed his turn and took another point of damage from the Thrush. 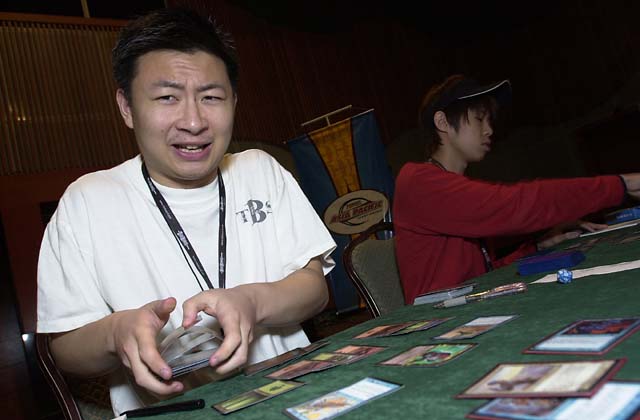 Seck then introduced his friend "Bob" - a Penumbra Bobcat, and Fukata just had to say hello and let it hit play as he played his eighth land on turn eight! With the ground locked and everyone just drawing land, the game was not the nail-biting spectacle one hopes for from a Feature Match.

Fukata continued to lock down the ground with a second Minotaur Illusionist as Seck verbally challenged him to sacrifice one of the red-blue beasts to bring down the annoying Dream Thrush. As additional bait, Seck played a Gaea's Skyfolk to continue the pressure in the air.

Deciding he had to do something, Fukata attacked with one of his Minotaur twins, with the damage prevention of the Samite Pilgrim keeping it safe from harm. Seck just gamely blocked with his Horned Kavu and they bounced like a couple of sumo wrestlers. And just in case that wasn't going to be enough, he played a Stone Kavu to help hold off the ground onslaught.

As the Minotaurs stared evilly across the table at the opposing Kavus, joined by one of the Tundra breed, the fliers continued to peck away at Fukata's life total. He just didn't seem able to find a spell to help him. Facing going down to one life, Fukata used Captain's Maneuver to redirect three damage from himself to the flying Elvish Merfolk and buy himself a couple of turns.

While keeping up his trademark chatter, Seck announced Time Walk as he played Temporal Spring to put the Stormscape Apprentice on top of Fukata's library. This allowed Seck to come in with the Airship alongside the perennially attacking Dream Thrush. He also decided to bring along his three Kavu and the Bobcat as his 19 life kept him safely out of range of a counterstrike. With two Minotaur Illusionists in play, things looked like they were going to be bloody for Seck's forces. Seck was holding back an Explosive Growth but chose not to use it as Fukata's two Minotaurs could destroy Seck's good targets in response. Fukata had a surprise Pollen Remedy allowed him to weather the assault without taking any damage while Seck lost two creatures to the blocking Illusionists as well as a Bobcat to the Pilgrim (though the Bobcat came back from the dead as a black creature)

Despite Fukata's exasperated countenance revealing that he drew nothing, Seck decided it was still safer to just press with the Dream Thrush that had now done over 10 points of damage. With his ground forces in tatters, Seck played out a Thornscape Apprentice as well as the Kavu Aggressor that he had been holding since the early game. Ironically, the Aggressor was countered by the Exclude that Seck predicted Fukata was holding when he last tried to cast it so many turns earlier!

The Exclude led to a Slingshot Goblin that would appear to be able to solve the problem of the pesky Dream Thrush while Fukata was still at two life. As the Goblin came online and attempted to destroy the attacking Thrush, Seck used the Explosive Growth that had been sitting in his hand, forcing Fukata to sacrifice one of his giant Minotaurs in response. But with his bird finally shot out of the sky, Seck was unable to press the attack with just a Horned Kavu, Thornscape Familiar, black cat token and Living Airship.

Things changed, but not significantly, as Seck drew Serpentine Kavu and played it as a blocker. But he was quickly running out of time as Fukata revealed his "killer combo" by using the Sisay's Ingenuity from many turns ago to turn the normally green Familiar blue and shot it with the Goblin. He followed this up the next turn by removing the undead Bobcat the same way. 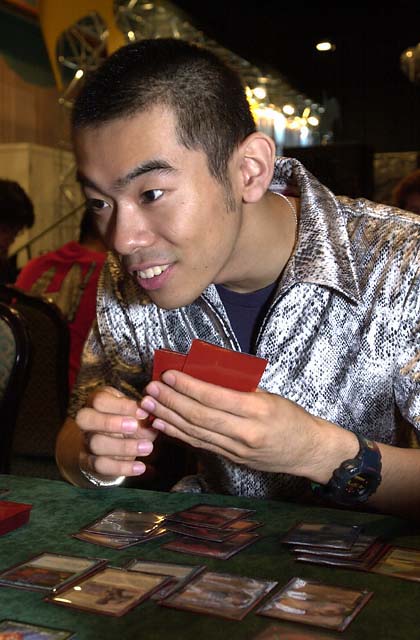 Even the Serpentine Kavu fell to the might of the Slingshot Goblin as Fukata used it's ability in conjunction with the Ingenuity and Tribal Flames to leave Seck with only a Horned Kavu able to block (the Apprentice continued to tap the Airship). Fukata decided it was time to begin attacked and served with the Illusionist and a formerly useless Spirit Weaver.

To continue his dominance of the game, he played a Sunscape Battlemage with blue kicker to draw additional cards. In desperation Seck played out a Kavu Glider, Amphibious Kavu and Thunderscape Familiar as chump blockers that were soon to be removed by the Slingshot Goblin. Fukata pressed the advantage with Silver Drake and it looked all finished for the spunky Australian.

But lo and behold! His next draw was Sparkcaster! With eight mana and a couple of green and red spells, it appeared that Seck was about to win the game by dealing two damage to Fukata. As he confidently cast it (hoping Fukata didn't realize how Ingenuity could save him by changing the color of the Sparkcaster), Fukata played Prohibit with kicker and was able to dash Seck's final hopes. The remainder of the game was just Fukata's creatures beating on Seck as nothing could survive the Japanese player's firm control of the game.

For the fans at home, the always-personable Seck was willing to show us what he sideboarded in and out after the first game.

Lamenting his draw of well over 10 of his 16 land in the first game, Seck decided to keep four land, Harrow, Penumbra Bobcat and Explosive Growth with the understanding that he may again get flooded with mana. Fukata played a Spirit Weaver that decided not to trade with Seck's turn three kitty. Seck was unable to follow up with any threats as he Harrowed, but Fukata was also unable or unwilling to cast spells as they both played land after land. Seck put Fukata on some sort of Counterspell, but this didn't change his game much as he continued to draw nothing but land and was unable to cast anything anyway.

Fukata finally drew into a threat and played Silver Drake, returning the Weaver. But tellingly, he chose not to recast the Weaver, leaving four mana open. Seck tried to bait out the Counterspell by attacking the 2/1 Bobcat into the larger Silver Drake, but Fukata let it through. Desperately trying to get the counter out of his opponent's hand, Seck Explosive Growthed the Bobcat and finally sucked out the Prohibit.

Hoping that the counters were gone Seck played his Serpentine Kavu but Fukata had another answer. And what an answer it was! Suffocating Blast put the Serpentine Kavu into the graveyard as well as killing the Bobcat leaving Seck with nothing on his side. Fukata finished him off by throwing out a Waterspout Elemental as Seck continued to just draw land and weaker creatures.

Seck was a bit disappointed with his heavy land draws, but he accepted that Fukata didn't draw many of his best cards in the first game, though many of them did come out for game two. While disappointed that he now won't be starting APAC with a 6-0 record, he still seemed upbeat and ready to take on the field.